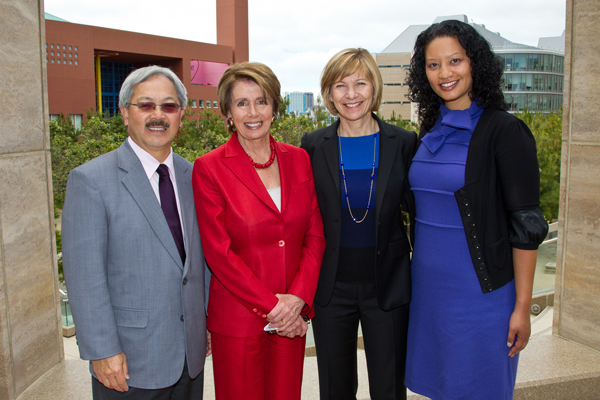 The grant will create the transportation infrastructure critical for ensuring access to the cutting-edge research and patient care programs at UCSF Mission Bay, including UCSF’s new 289-bed hospital complex, which will provide services to women, children and cancer patients. Construction of the medical center complex is well underway and scheduled to open in early 2015. 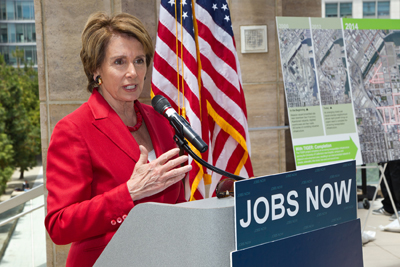 The grant also will fund other Mission Bay improvements, such as completing the street additions, highway off-ramps, bike lanes, pedestrian walkways, and transit additions necessary to serve this vibrant — and still growing — neighborhood.

“This is a great day for UCSF Mission Bay and the entire Mission Bay community,” said Desmond-Hellmann.

Held on the outdoor, second-story terrace of Genentech Hall, overlooking the Koret Quad and the newly opened neuroscience building across the campus green, the event provided a moment to take stock in the phenomenal success of UCSF Mission Bay, the entire Mission Bay community and the flourishing biotech zone.

“Mission Bay co-locates technology, biotech, and science research and education with a new $1.5 billion UCSF hospital under construction, along with 6,000 housing units connected to a robust transit network,” Pelosi said. “I was proud to advocate on behalf of this worthy project, and applaud Secretary [Ray] LaHood for his continued commitment to rebuilding America. The overwhelming demand among cities, counties, and states for TIGER transportation grants reinforces the urgent need to pass a robust, multi-year transportation bill to create jobs and strengthen our economy.” 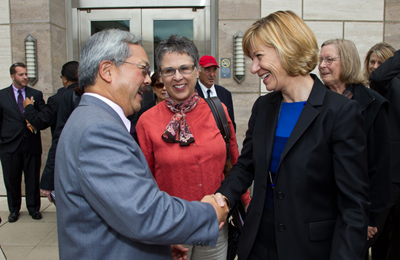 The City’s success in receiving the grant reflects the achievement of the development of Mission Bay, said Lee, which “is a model for the nation,” an example of public, private, and nonprofit entities working together for the common good.

Key to the success of Mission Bay, he and Pelosi emphasized, was the world-class caliber of UCSF, the heart of the thriving community, what Pelosi called an “incredible institution for research and care that is improving the health of the world.”

TIGER grants, created in the American Recovery and Reinvestment Act, are awarded on a competitive basis for projects that have a significant impact on the nation, metropolitan area or region. For fiscal year 2012, the U.S. Department of Transportation will award $500 million in TIGER grantsfor 47 transportation projects in 34 states and the District of Columbia. Announcing the awards on June 22, U.S. Transportation Secretary LaHood said, “TIGER projects mean good transportation jobs today and a stronger economic future for the nation.”  Read more about the 2012 awards. [PDF]