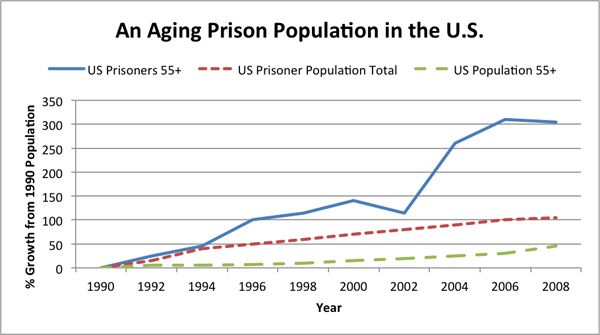 The U.S. criminal justice population is aging at a significantly more rapid rate than the overall U.S. population. Source: Bureau of Justice Statistics and the U.S. Census Bureau.

Soaring numbers of older, sicker prisoners are causing an unprecedented health care challenge for the nation’s criminal justice system, according to a new UCSF report.

As the American penal system confronts a costly demographic shift toward older prisoners, the authors call for an overhaul in health care practices for elderly inmates who disproportionately account for escalating medical expenses behind bars. The recommendations include screening for dementia among prisoners, improved palliative care, and standard policies for geriatric housing units for infirm inmates. 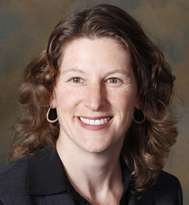 The article will be published online June 14, 2012, in the American Journal of Public Health.

“A first step is to focus on these nine priority areas in order to set the stage for collaboration among the many disciplines involved in older prisoner health care,” Williams said.

As a result, prisons are increasingly challenged to provide care to older inmates with a litany of chronic medical conditions including diabetes, heart failure, cognitive impairment and end-stage liver disease. Many older inmates also suffer from infectious diseases such as HIV, tuberculosis and hepatitis C. With higher rates of disability in general, older prisoners cost approximately two to three times as much as younger inmates.

“Prisoners have a right to timely access to an appropriate level of care for serious medical needs,’’ the authors said in the report. “Yet criminal justice health care systems are underprepared to provide cost-effective quality care for older adults.’’

The report points out that prompt attention to age-related disabilities of older inmates eventually would result in societal benefits outside prison gates. With the vast majority of inmates ultimately released back to the community, “Prison programs that improve health and cognitive skills or that target substance abuse have been associated with decreased recidivism and re-arrest,’’ the authors wrote. And with better care during incarceration, prisoners when released would make less use of emergency rooms and other community medical resources.

Study funding was provided by the Jacob and Valeria Langeloth Foundation, by private correctional health care vendors and by the John Jay College of Criminal Justice.

Williams is also the lead author of another report on the aging prison crisis that was recently published in the Journal of the American Geriatrics Society (JAGS).

Problems with the graying prison population are straining state and local budgets by spilling into the community as well as public health care systems, the JAGS report found.

“Our study discusses how successful models of care that have been developed for older adults in the community could be adapted to address the mounting health care crisis of aging in the criminal justice system,” said Williams.

The senior author of the JAGS study is Louise Walter, MD, a UCSF professor of medicine in the geriatrics division and a physician at the San Francisco VA Medical Center.

Williams receives funding support from the National Institute of Aging (K23AG033102), the Jacob and Valeria Langeloth Foundation, and the UCSF Program for the Aging Century. Walter is supported by the National Cancer Institute Contract R01CA134425.