Anyone who doubts that history is taught at UCSF should have listened to Adele Clarke talk about the “Adventures of a Sociologist in the Health Sciences.” 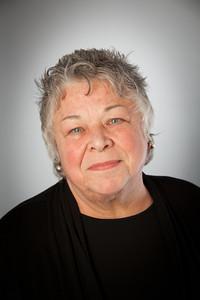 The occasion was the 32nd Helen Nahm Research Lecture, an annual UCSF School of Nursing lecture named after the innovative dean who served from 1958 to 1969. The opportunity to deliver the lecture is awarded each year to a faculty member or graduate who has made an outstanding contribution to nursing science and research.

“I entered UCSF warily at age 35 — not a late bloomer for nursing academia but about 15 years late for most sociologists. It was exhilarating,” said Clarke, 67, a veteran of the civil rights and feminist movements who received her PhD degree in sociology in 1985. She was hired by UCSF as an assistant professor four years later.

Her lecture was thorough and sweeping, personal and professional, laced with pivotal moments in her career and fond remembrances of such major influences as the late UCSF sociologist Anselm Strauss, a pioneer of medical sociology as a specialty, and her colleague Susan Leigh Star, who died in 2010.

The talk began with a baby picture of Clarke, and ended with a photograph of the view from the deck of her new house in the city’s Glen Park neighborhood, where she watches coyotes roam and red-tailed hawks soar.

Most of her lecture focused on the six major trajectories of Clarke’s scholarly work: feminist women’s health and technoscience, sociology of scientific work, the emergence of the American reproductive sciences, biomedicalization studies, qualitative research methods, and symbolic interactionist studies.

That work has led to a dazzling array of honors, awards, books, articles, chapters, guest editorships, workshops, lectures, courses she has taught, students she has advised, and visiting positions in France, Austria, Italy and Australia.

“While feminist women's health and technoscience studies has been one of my longest and strongest areas of commitment, I have never studied women per se,” Clarke said. “My focus has been on the sciences, technologies, professions and institutions with which we must deal as both healthy women seeking enhanced control of our lives — for example, via contraception — and as patients, such as getting Pap smears. I studied some of the sources of difficulty in hopes of changing them, and informing women of risks and problem areas.” For example, for more than a decade, she co-wrote the cervical dysplasia section of Our Bodies, Ourselves, a groundbreaking book on women’s health.

Clarke said one of her major commitments has been to the history of contraceptive technologies.

Women's “needs and desires have rarely been interrogated directly — no one asks "What do women want?’" Reproduction, like sex, used to be a dirty word in the sciences and pursuing that area of work was a radical act after World War I when the American reproductive sciences emerged. Gradually reproductive research in biology, medicine and animal agriculture coalesced into a robust scientific discipline focused then especially on reproductive endocrinology. It has expanded ever since offering improved gynecology, obstetrics, contraception, IVF, and so on.

Of her career as a whole, Clarke said “Returning to a particular trajectory does feel like reclaiming an identity temporarily suspended while doing other things. And at times it did feel like performing that circus act where you keep too many plates twirling on poles and run around madly trying to keep them all going.”

Her colleague, Shari Dworkin, PhD, introduced her to the audience on June 4. Noting that “her national and international prominence is absolutely stunning,” she said it was extremely fitting that Clarke had been asked to deliver the prestigious lecture.

Afterward, Brian Dolan, PhD, professor and vice chair of the Department of Anthropology, History and Social Medicine at UCSF and director of the graduate programs in history of health sciences, reflected on Clarke’s talk.

“Adele’s lecture was a tour of her career achievements, which are impressive for their breadth and commitment to engagement across disciplines,” Dolan said. “If all humanities and social science scholars followed her example, we would live in a different world full of natural collaborations and productive cross-fertilization, no matter what one’s background training. Clarke shows us how exciting it can be to dare to travel to new intellectual horizons.”

Clarke plans to retire later this year but is looking forward to various academic projects, including a second edition of her qualitative methods book Situational Analysis: Grounded Theory After the Postmodern Turn (Sage, 2005).

“This lovely opportunity to reflect on my life and work with you all today has interestingly been very helpful in coming to terms with my retirement,” Clarke said. “It feels exquisitely sweet.”