Harry W. Hind, a 1939 graduate of the UCSF School of Pharmacy who invented solutions that revolutionized contact lens use, as well as a topical patch to treat pain from shingles, died on April 12. He was 96. 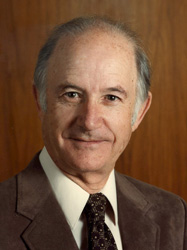 Hind co-founded Barnes-Hind Pharmaceuticals Inc., which developed drugs to treat tuberculosis and glaucoma. He was a trustee of the UCSF Foundation and a major benefactor of the School of Pharmacy.

Hind and his wife, Diana, who passed away in 2011, gave a total of $5.3 million to establish the school’s first two distinguished professorships.

In 2005, he also gave $1 million to establish the Harry William Hind Dean’s Endowment Fund, a discretionary fund for use by the dean of the School of Pharmacy to meet pressing priorities and opportunities.

The first Harry W. and Diana V. Hind Distinguished Professorship in Pharmaceutical Sciences is held by James Wells, PhD, supporting his work in drug discovery. Wells is chair of the School of Pharmacy’s Department of Pharmaceutical Chemistry.

The second professorship is held by Shuvo Roy, PhD, supporting his work in the development of medical devices, including a project to create an implantable bioartificial kidney. Roy is a faculty member in the Department of Bioengineering and Therapeutic Sciences, a joint department of the UCSF Schools of Pharmacy and Medicine.

Taking into account additional major gifts to aid research in neurology and preserving vision, Hind had given more than $7.5 million to UCSF at the time of his death.

To read the entire story, please go to the UCSF School of Pharmacy website.