Few of us are addicts, but all of us possess natural opioids — morphine-like endorphins — to quell pain. As a young UCSF scientist in the 1970s, Allan Basbaum, PhD, was one of the first researchers to probe the nerve pathways responsible for the pain-killing effects of opioids and of deep-brain stimulation, a technique that was being pioneered at the time by UCSF neurosurgeons.

In the treatment of severe pain, opioids such as fentanyl and morphine are mainstays. But prescribing physicians and millions of patients must cope with side effects that include constipation, drowsiness, risk of addiction and sometimes even respiratory failure and death.

From the days of Descartes to the present, Basbaum says, efforts to advance pain treatment often have been hampered by unrevealed layers of central nervous system complexity that have remained beyond the grasp of ever-evolving scientific understanding. 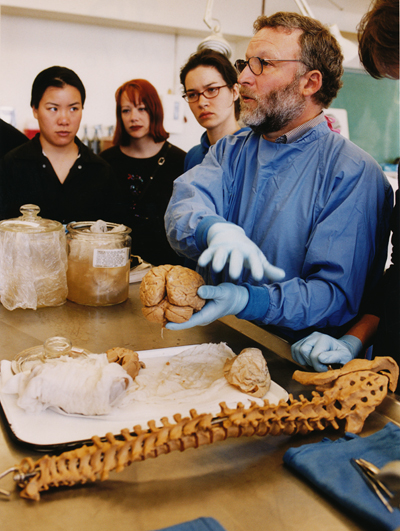 Allan Basbaum, chair of the Department of Anatomy since 1997, conducted a class as part of UCSF Mini Medical School when he directed the public education program years ago. Photo by Christine Jegan.

“The picture of clinical pain-processing mechanisms is far more complicated than what’s in the textbooks,” Basbaum says.

One major lesson that has emerged is that not all types of pain are the same — nor should they be treated the same. For some types of pain, for instance, even opioids often are not very effective.

A little more than a century ago, after nerve pathways linking the source of sensory pain in the limbs to the brain were first identified, physicians sometimes attempted to relieve pain by severing the major nerve bundles responsible. This procedure, called a cordotomy, often proved disastrous.

Even in modern times physicians often have been thwarted in their efforts to provide innovative and improved pain relief by the need for a deeper understanding of the nerve circuitry involved.

While the Berlin Wall was falling in 1989, Basbaum was in the city for a meeting he helped organize, initially called “Toward a New Pharmacology of Pain: Beyond Morphine.” The organizers dropped the name because they realized the difficulty of abandoning morphine as the major pharmacotherapy for severe pain.

“Today we’re still trying to get beyond morphine,” Basbaum says.

But there’s still hope for therapies that are better than opioids. In fact, Basbaum’s latest laboratory investigations are the basis for new treatment strategies to halt certain types of chronic pain, although they remain untested in humans.

Basbaum surveyed the history of recent decades’ pain research and his own role in it during a lecture titled “The Neurological Basis of Pain and Its Control,” on April 17 in Cole Hall on the UCSF Parnassus campus.

Basbaum, who came to UCSF as a postdoctoral fellow almost four decades ago and has chaired the Department of Anatomy at UCSF since 1997, was being honored as the second recipient of the Faculty Research Lecture — Translational Science award, given annually by the UCSF Academic Senate.

As a postdoctoral fellow Basbaum and UCSF faculty member Howard Fields, MD, in the late 1970s provided the first insights into the neural circuits through which endogenous opioids — endorphins — can prevent pain. They discovered a nerve network for pain control that underlies the pain relief due to either opioids or electrical brain stimulation. 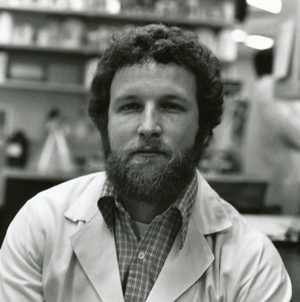 Most significantly, Basbaum and Fields showed that this analgesia is due to inhibition of pain-transmission nerve cells in spinal cord. Subsequently, throughout a long and productive career Basbaum has studied these neurons and the pain fibers in the dorsal root ganglia of the spinal cord that provide input to them.

In collaborations over the years with at least 30 other UCSF faculty members, Basbaum has innovatively used anatomical, behavioral, and genetic approaches to delineate the circuitry and molecular mechanisms that contribute to pain sensation and pain control. He has studied pain circuitry on many scales, from tracking the role of nerve fibers that extend from brain to spinal cord to studying individual neurons and the signaling molecules within them.

“The scientific literature used to say that all pain fibers were the same,” Basbaum says.

But Basbaum’s collaborations with fellow pain researcher David Julius, PhD, chair of the Department of Physiology at UCSF, have revealed more than a dozen distinctive receptors that receive signals from neurotransmitters. These can act in a variety of ways within different neurons in the pain network centered on the dorsal horn, which is the spinal cord target of the nerve fibers that carry tissue and injury messages.  Several of the molecules studied by Julius and Basbaum are being investigated as potential targets for the treatment of chronic pain.

Basbaum is especially interested in chronic pain syndromes, which are quite common. For instance, many people suffer from chronic neuropathic pain after a bout of shingles, years or decades after the virus that causes chicken pox has been vanquished. Chronic pain is not merely prolonged acute pain, Basbaum says. Many types of chronic pain are induced by stimuli that are essentially harmless — such as light touch — but that are perceived as painful, he says.

These changes contribute to a state of hyperexcitability, enhancing the transmission of pain messages to the brain and causing normally innocuous stimuli to become painful.

Basbaum is a member of the Institute of Medicine, the American Academy of Arts and Sciences and a Fellow of the Royal Society of the United Kingdom. He is editor-in-chief of Pain, the journal of the International Association for the Study of Pain.

Brain, Mind and Behavior: Pain and the Brain

Cellular and Molecular Mechanisms of Pain