The longstanding mystery of how selective hearing works — how people can tune in to a single speaker while tuning out their crowded, noisy environs — is solved this week in the journal Nature by two scientists from the University of California, San Francisco (UCSF).

Psychologists have known for decades about the so-called “cocktail party effect,” a name that evokes the Mad Men era in which it was coined. It is the remarkable human ability to focus on a single speaker in virtually any environment — a classroom, sporting event or coffee bar — even if that person’s voice is seemingly drowned out by a jabbering crowd.

To understand how selective hearing works in the brain, UCSF neurosurgeon Edward Chang, MD, a faculty member in the UCSF Department of Neurological Surgery and the Keck Center for Integrative Neuroscience, and UCSF postdoctoral fellow Nima Mesgarani, PhD, worked with three patients who were undergoing brain surgery for severe epilepsy. 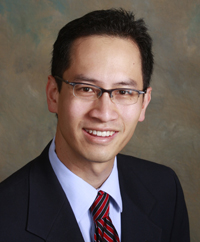 Part of this surgery involves pinpointing the parts of the brain responsible for disabling seizures. The UCSF epilepsy team finds those locales by mapping the brain’s activity over a week, with a thin sheet of up to 256 electrodes placed under the skull on the brain’s outer surface or cortex. These electrodes record activity in the temporal lobe — home to the auditory cortex.

UCSF is one of few leading academic epilepsy centers where these advanced intracranial recordings are done, and, Chang said, the ability to safely record from the brain itself provides unique opportunities to advance our fundamental knowledge of how the brain works.

“The combination of high-resolution brain recordings and powerful decoding algorithms opens a window into the subjective experience of the mind that we’ve never seen before,” Chang said.

In the experiments, patients listened to two speech samples played to them simultaneously in which different phrases were spoken by different speakers. They were asked to identify the words they heard spoken by one of the two speakers.

The authors then applied new decoding methods to “reconstruct” what the subjects heard from analyzing their brain activity patterns. Strikingly, the authors found that neural responses in the auditory cortex only reflected those of the targeted speaker. They found that their decoding algorithm could predict which speaker and even what specific words the subject was listening to based on those neural patterns.  In other words, they could tell when the listener’s attention strayed to another speaker.

“The algorithm worked so well that we could predict not only the correct responses, but also even when they paid attention to the wrong word,” Chang said.

Speech Recognition by the Human Brain and Machines

The new findings show that the representation of speech in the cortex does not just reflect the entire external acoustic environment but instead just what we really want or need to hear.

They represent a major advance in understanding how the human brain processes language, with immediate implications for the study of impairment during aging, attention deficit disorder, autism and language learning disorders.

In addition, Chang, who is also co-director of the Center for Neural Engineering and Prostheses at UC Berkeley and UCSF, said that we may someday be able to use this technology for neuroprosthetic devices for decoding the intentions and thoughts from paralyzed patients that cannot communicate.

Revealing how our brains are wired to favor some auditory cues over others it may even inspire new approaches toward automating and improving how voice-activated electronic interfaces filter sounds in order to properly detect verbal commands.

How the brain can so effectively focus on a single voice is a problem of keen interest to the companies that make consumer technologies because of the tremendous future market for all kinds of electronic devices with voice-active interfaces. While the voice recognition technologies that enable such interfaces as Apple's Siri have come a long way in the last few years, they are nowhere near as sophisticated as the human speech system.

An average person can walk into a noisy room and have a private conversation with relative ease — as if all the other voices in the room were muted. In fact, said Mesgarani, an engineer with a background in automatic speech recognition research, the engineering required to separate a single intelligible voice from a cacophony of speakers and background noise is a surprisingly difficult problem.

Speech recognition, he said, is “something that humans are remarkably good at, but it turns out that machine emulation of this human ability is extremely difficult.”

The article, "Selective cortical representation of attended speaker in multi-talker speech perception" by Nima Mesgarani and Edward F. Chang appears in the April 19, 2012 issue of the journal Nature.

This work was funded by the National Institutes of Health and the Ester A. and Joseph Klingenstein Foundation.