Scientists at the UCSF-affiliated Gladstone Institutes have enhanced the understanding of how a protein linked to Alzheimer’s disease keeps young brains healthy, but can damage them later in life — suggesting new research avenues for treating this devastating disease. 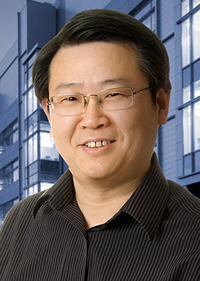 In the Journal of Neuroscience, available online today, researchers in the laboratory of Yadong Huang, MD, PhD, have uncovered the distinct roles that the apoE protein plays in young vs. aging brains. These findings, which could inform the future of Alzheimer’s drug development, come at a time of unprecedented challenge and need.

“By the year 2030, more than 60 million people worldwide will likely be diagnosed with Alzheimer’s, but we are still grappling with the disease’s underlying biological mechanisms,” said Huang, an Alzheimer’s expert at the Gladstone Institute of Neurological Disease and an associate professor of neurology and pathology at UCSF. “However, with this research we’ve shed new light on these complex processes — and how we could modify these processes to fight this disease.”

The molecular mechanisms behind Alzheimer’s have long evaded scientists. Early studies found that different types, or variants, of the apoE gene — including apoE3 and apoE4 — influence one’s genetic risk for developing the disease. The apoE4 variant is the major genetic risk factor for the disease, while apoE3 is less risky — and far more common. From among these variants, everyone inherits two — one from each parent — that provide a blueprint for making the protein known simply as apoE. Previous findings revealed a complicated interplay between apoE and another protein called amyloid-beta (Aß),which is present in increased quantities in the brains of Alzheimer’s patients, but the exact nature of this complex relationship remains unclear.

Recent research by another group found that a drug that boosted apoE protein levels also reversed the build-up of Aß in mice genetically modified to mimic Alzheimer’s. So some scientists have theorized that boosting apoE levels could be beneficial in slowing the disease’s progression in humans, and several groups have begun to explore this therapeutic strategy.

In this study, Huang and his team tested this idea. They genetically modified mice to have either human apoE3 or apoE4 and then monitored them for any subsequent build-up of toxic Abin their brains as they aged.

“We thought a straightforward relationship existed between apoE protein levels and Aß, and that boosting apoE levels in these mice would promote — not halt — the build-up of Aß,” explained Gladstone Postdoctoral Fellow and lead author Nga Bien-Ly, PhD.

The team’s experiments revealed both surprising and intricate roles for apoE. In young mice, apoE proteins produced by all variants of the apoE gene — even the risky apoE4 variant — are essential because the protein they build helps clear away excessive amounts of Aß. But as the mice aged, this process began to malfunction — especially in those mice with two copies of the apoE4 gene but also in mice with two copies of apoE3. As apoE protein levels rose, Abbegan to accumulate. But in mice mutated to have only one copy of the apoE gene — either apoE3 or apoE4 — apoE protein levels dropped by half and Aβ build-up was reduced. These results indicated that Abbuild-up isn’t associated only with a specific apoE variant, but instead is also related to the overall amount of apoE protein produced as the brain ages.

“Our findings suggest that reducing levels of proteins produced by either apoE3 or apoE4 — rather than raising them — could be key to lowering Aß build-up in the brain,” said Huang. “We hope that our research could spur new therapies that successfully combat Alzheimer’s at the molecular level — putting us one step ahead of this deadly disease.”

Other scientists who participated in this research at Gladstone include Anna Gillespie, David Walker and Seo Yeon Yoon. Funding came from a variety of sources, including the National Institutes of Health.