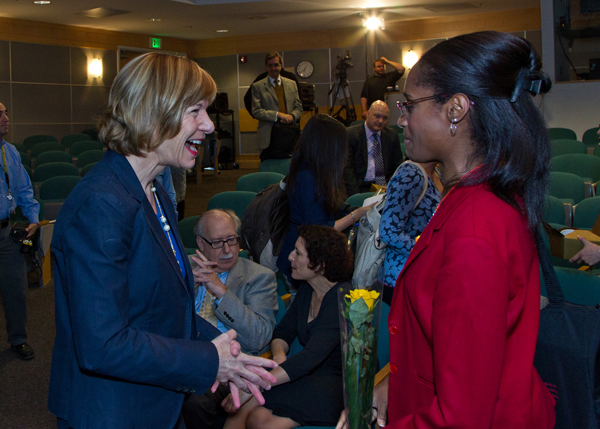 UCSF Chancellor Susan Desmond-Hellmann talks with a graduating student after delivering her 2012 commencement address in which she announced the launch of a $100 million health sciences education initiative to support students and teaching.

Last year, the chancellor and her husband, Nicholas Hellmann, MD, had jump-started the initiative, the first of its kind at UCSF, with a $1 million gift for professional student scholarships to be divided four ways among the schools of dentistry, medicine, nursing and pharmacy. That money has doubled, thanks to matching donations from alumni.

“With that kind of generosity, I’m very confident we’ll reach our $100 million goal,” said Desmond-Hellmann, who explained that she and her husband — who met as residents at UCSF — were embarrassed to make their gift public but did so to encourage matching gifts.

The initiative, aimed at offsetting diminished state funding, is designed to support students and teaching. It includes $80 million in new scholarships and $20 million for curriculum innovation, interprofessional education and teaching facilities.

During her speech that was webcast live from the Parnassus campus, Desmond-Hellmann spoke passionately about the importance of UCSF’s public mission.

“We are deeply proud of everything we do to give back to the community, the state, the nation and the world,” she said. “Educational access and affordability are an essential part of that public commitment, and we need to continue to attract the best, the brightest and the most diverse students regardless of their financial circumstances. And we must make it possible for every student to realize their dreams.”

She wants students to fulfill those dreams not only during their time at UCSF, but also after commencement, no matter where they choose to work.

“A student should be able to pursue a dream of treating patients at San Francisco General Hospital, or one of the community clinics in the city and county of San Francisco, or in a sub-Saharan African village, or anywhere in the world where patient care or research brings them,” she said. “... It’s all good and it shouldn’t be encumbered by debt or thoughts of paying back large student loans.”

'You Can Stay Forever' at UCSF

Noting that this year marks the 30th anniversary of the start of her residency in internal medicine at UCSF, Desmond-Hellmann said she learned a new acronym from students during a recent breakfast gathering. “I thought I knew them all,” she said, smiling. “So, what does UCSF stand for? You can stay forever.”

Desmond-Hellmann, UCSF’s first female chancellor, said she distinctly remembers that women were in the minority when she graduated from medical school at the University of Nevada in 1982 and that she had few female role models throughout her career.

“The happy news is that it has definitely changed since I’ve been back at UCSF,” said the chancellor, who returned in 2009. “There are many wonderful women leaders at our institution.”

Women, in fact, constitute 68 percent of the 806 students in the Class of 2012, said the chancellor, who took enormous pride in the diversity of those about to graduate. Nineteen percent are underrepresented minorities, and the class as a whole includes people from 49 states, 51 countries and six continents. Those born in California account for 43 percent of the graduates.

During a question-and-answer session after her speech, Desmond-Hellmann was asked how her UCSF residency prepared her for the future.

As a resident, the chancellor said, she thought she was learning technical skills, such as how to put in a central line or how to intubate a patient. Later, she realized UCSF had given her so much more.

“I think the most important thing I learned at UCSF is values,” she said. “And I learned that absolutely from the faculty. … I saw how they spoke to patients and their families. I saw how they cared for patients. I saw, particularly even more in my fellowship than my residency, how you have end-of-life discussions with a cancer patient or their family.”

Just as importantly, she took away a sense of excellence and how much it really mattered to leave no stone unturned in figuring out what was best for a patient.

“Once you have people who are really talented and technically very well trained, what separates the ones you want to work around are the values,” Desmond-Hellmann said. “I definitely learned that here.”