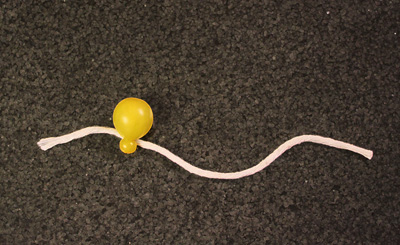 Represented here by a tomato and a rope, ribosomes are central to all life on Earth because they help translate genetic information into proteins. Image by Gene-Wei Li/UCSF

A hidden and never before recognized layer of information in the genetic code has been uncovered by a team of scientists at the University of California, San Francisco (UCSF) thanks to a technique developed at UCSF called ribosome profiling, which enables the measurement of gene activity inside living cells — including the speed with which proteins are made.

By measuring the rate of protein production in bacteria, the team discovered that slight genetic alterations could have a dramatic effect. This was true even for seemingly insignificant genetic changes known as “silent mutations,” which swap out a single DNA letter without changing the ultimate gene product. To their surprise, the scientists found these changes can slow the protein production process to one-tenth of its normal speed or less.

As described today in the journal Nature, the speed change is caused by information contained in what are known as redundant codons — small pieces of DNA that form part of the genetic code. They were called “redundant” because they were previously thought to contain duplicative rather than unique instructions.

This new discovery challenges half a century of fundamental assumptions in biology. It may also help speed up the industrial production of proteins, which is crucial for making biofuels and biological drugs used to treat many common diseases, ranging from diabetes to cancer.

“The genetic code has been thought to be redundant, but redundant codons are clearly not identical,” said Jonathan Weissman, PhD, a Howard Hughes Medical Institute Investigator in the UCSF School of Medicine Department of Cellular and Molecular Pharmacology.

“We didn't understand much about the rules,” he added, but the new work suggests nature selects among redundant codons based on genetic speed as well as genetic meaning.

Similarly, a person texting a message to a friend might opt to type, “NP” instead of “No problem.” They both mean the same thing, but one is faster to thumb than the other.

The work addresses an observation scientists have long made that the process protein synthesis, so essential to all living organisms on Earth, is not smooth and uniform, but rather proceeds in fits and starts. Some unknown mechanism seemed to control the speed with which proteins are made, but nobody knew what it was. 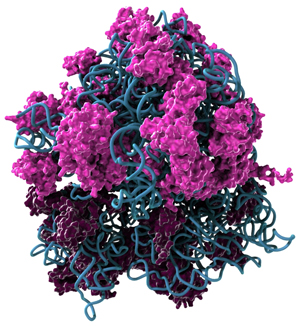 The structure of a ribosome. Image by Dale Muzzey/UCSF

To find out, Weissman and UCSF postdoctoral researcher Gene-Wei Li, PhD, drew upon a broader past effort by Weissman and his colleagues to develop a novel laboratory technique called “ribosome profiling,” which allows scientists to examine universally which genes are active in a cell and how fast they are being translated into proteins.

Ribosome profiling takes account of gene activity by pilfering from a cell all the molecular machines known as ribosomes. Typical bacterial cells are filled with hundreds of thousands of these ribosomes, and human cells have even more. They play a key role in life by translating genetic messages into proteins. Isolating them and pulling out all their genetic material allows scientists to see what proteins a cell is making and where they are in the process.

Weissman and Li were able to use this technique to measure the rate of protein synthesis by looking statistically at all the genes being expressed in a bacterial cell.

What the scientists hypothesize is that the pausing exists as part of a regulatory mechanism that ensures proper checks — so that cells don’t produce proteins at the wrong time or in the wrong abundance.

A Primer on DNA Codons

All life on earth relies on the storage of genetic information in DNA (or in the case of some viruses, RNA) and the expression of that DNA into proteins to build the components of cells and carry out all life’s genetic instructions.

Every living cell in every tissue inside every organism on Earth is constantly expressing genes and translating them into proteins—from our earliest to our dying days. A significant amount of the energy we burn fuels nothing more than this fundamental process.

The genetic code is basically a universal set of instructions for translating DNA into proteins. DNA genes are composed of four types of molecules, known as bases or nucleotides (often represented by the four letters A, G, T and C). But proteins are strings of 20 different types of amino acids.

To code for all 20 amino acids, the genetic code calls for genes to be expressed by reading groups of three letters of DNA at a time for every one amino acid in a protein. These triplets of DNA letters are called codons. But because there are 64 possible ways to arrange three bases of DNA together — and only 20 amino acids used by life — the number of codons exceeds the demand. So several of these 64 codons code for the same amino acid.

Scientists have known about this redundancy for 50 years, but in recent years, as more and more genomes from creatures as diverse as domestic dogs to wild rice have been decoded, scientists have come to appreciate that not all redundant codons are equal.

Many organisms have a clear preference for one type of codon over another, even though the end result is the same. This begged the question the new research answered: if redundant codons do the same thing, why would nature prefer one to the other?

The article, “The anti-Shine-Dalgarno sequence drives translational pausing and codon choice in bacteria,” by Gene-Wei Li, Eugene Oh, and Jonathan S. Weissman, was published by the journal Nature on March 28.

This work was supported by the Helen Hay Whitney Foundation and by the Howard Hughes Medical Institute.