Radiation exposures to the public in Japan from meltdowns at three Fukushima Daiichi nuclear power plant reactors in the wake of last year’s 9.0-magnitude earthquake and 45-foot tsunami have been less than what people were exposed to in the aftermath of the Chernobyl disaster a quarter century ago, according to two experts who spoke at a daylong symposium at UCSF marking the anniversary of the catastrophe in Japan.

Speakers said at the March 19 symposium that monitoring of children living just outside the evacuated zone points to higher than background levels of exposure, but not to unsafe levels. But there is uncertainty about harms that may arise due to ingestion of short-lived radioactive iodine in the immediate aftermath of the reactor meltdowns.

James Seward, MD, medical director of Lawrence Livermore National Laboratory and a UCSF clinical professor, referred to research findings that have emerged from studies of health outcomes associated with the Chernobyl disaster a quarter-century ago in discussing potential health outcomes that may result from the Fukushima Daiichi reactor meltdowns.

As in Chernobyl, some rescue workers were exposed to levels of radiation close to or exceeding the permissible acute exposure limit for such workers, which in Japan is 100 millisieverts. But there were many fewer who received unsafe radiation doses in Fukushima compared to the number exposed in Chernobyl.

Most radiation concerns have been centered on gauging risk to the broader public. These worries are focused on risks posed by internal doses acquired by children and others outside the power plants. The main concerns are two radioactive chemical isotopes released during the meltdowns that can enter the body through inhalation or by consuming milk and other foods. 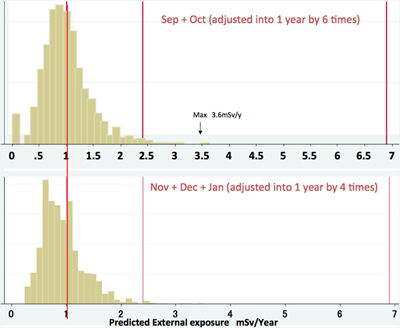 Outside of the exclusion zone in the city of Kouri, public health workers asked that children under 16, infants and pregnant women be monitored for radiation exposure. Only about one out of every 100 who were monitored received a dose due to the nuclear meltdown that exceeded the worldwide mean background exposure of 2.4 millisieverts/year, according to symposium speaker Mitsuyoshi Urashima, MD, PhD, MPH, a pediatric oncologist and molecular epidemiologist from the Jikei University School of Medicine in Tokyo.

However, although radioactive iodine quickly decays to undetectable levels, the risk to those exposed remains elevated for a lifetime, so the number of excess thyroid cancers will continue to climb, he added.

The thyroid gland absorbs much more iodine in growing children. Radiation-related risks from Chernobyl decreased with age at exposure, and studies have not shown any increase in risk for those exposed as adults, according to analysis by UCSF epidemiologist Lydia Zablotska, MD, PhD.

Compared to the Chernobyl response, residents were evacuated more rapidly and food products were taken off the market more quickly following the Fukushima Daiichi reactor meltdowns, Seward said at the symposium. About 60 percent less radiation was released.

Mitsuyoshi Urashima, MD, PhD, MPH, a pediatric oncologist and molecular epidemiologist at the Jikei University School of Medicine in Tokyo, has taken a leading role as a government advisor and in educating the public about the health effects of nuclear radiation following the Fukushima Daiichi reactor meltdowns. He has also written a book for the public on the subject.

Urashima, who also serves as a consultant for the city of Kouri, outside the evacuation zone, noted the confusion and mistrust generated by government communications about radiation releases, contamination and hazards. It has not been unusual for local officials and citizens to act more decisively than central government agencies to take the initiative in organizing clean-up or monitoring efforts, he said. 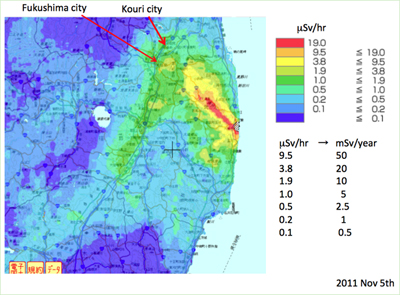 Most people in Fukushima prefecture in Japan evacuated from highly contaminated areas following reactor meltdowns, according to Japanese pediatric oncologist and epidemiologist Mitsuyoshi Urashima, and Fukushima city has the highest radiation levels among residential areas.

Environmental levels of radioactive contaminants in the soil vary over short distances, according to Urashima, and patterns of rainwater runoff can affect levels of radiation in soil.

About 30 percent of more than 3,000 children tested to date have had thyroid nodules, but it is unclear whether this represents an abnormally high percentage, Urashima said. No thyroid cancers have been detected thus far. However, early screening result may point to an elevated incidence of abnormal thyroid function.

Seward and Urashima both noted that thyroid cancer almost always can be treated successfully. Only about 15 extra thyroid cancer deaths have been attributed to the Chernobyl accident. But Seward also suggested that any excess cancer deaths might be undetectable against the much higher, normal incidence of cancer. Urashima said monitoring of environmental exposures in Kouri indicates that there has been less exposure to radioactivity from the meltdowns than to radiation from normal background sources.