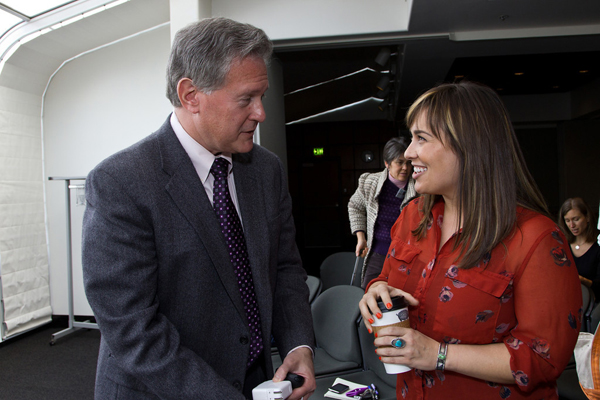 It’s not easy to give a 90-minute talk that includes mitochondrial adaptation, glucose metabolism, the seasonal fruit binges of orangutans and the profit margins of the food industry.

However, that’s exactly what childhood obesity expert Robert Lustig did in his keynote speech at UCSF’s Wellness Expo — and he managed to be entertaining and riveting despite all the studies and data that he summoned.

“Science ultimately is what makes this understandable. Otherwise, it’s just some lunatic zealot talking out of his you-know-what,” said Lustig, MD, a professor of pediatrics in the division of endocrinology at UCSF Benioff Children’s Hospital and director of the Weight Assessment for Teen and Child Health (WATCH) Program at UCSF. 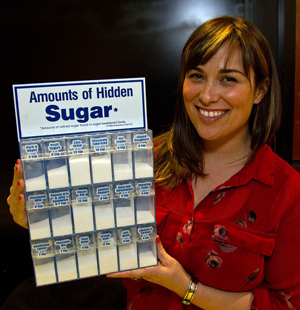 His wide-ranging lecture, “Darwin, Diet, Disease and Dollars,” examined the neuroendocrinology of energy balance, a complicated phenomenon that he explained with passion and precision.

The workings of two hormones, insulin and leptin, are keys to the puzzle. Leptin tells our brains we can burn energy at a normal rate and feel good. However, many of us are leptin-resistant. Our brains aren’t getting the leptin signal because it is blocked by excessive insulin, secreted by the pancreas to compensate for insulin resistance — produced over time by too much fructose, which can be metabolized only by the liver and turns into fat when stored.

“Insulin makes fat,” Lustig said. “The more insulin, the more fat. You can take that one to the bank. … Insulin turns out to be the linchpin in this whole business.”

“When your leptin goes down, your brain thinks you’re starving and wants to replete your leptin levels,” he said. “That’s the recidivism of obesity right there.”

Lustig said humans have an innate predilection, on a Darwinian basis, for what is sweet. It’s useful when energy storage is vital, such as during pregnancy, puberty and for our ancestors at harvest time. Sugar, however, is addictive.

Making the Case Against Sugar

Part prosecutor, part evangelist, he laid out the case against sugar and said chronic fructose exposure alone can cause the constellation of conditions called the metabolic syndrome, which can lead to such things as diabetes, cancer and heart disease.

Lustig and his UCSF colleagues Laura Schmidt, PhD, MSW, MPH, and Claire Brindis, DPH, received widespread media coverage for their recent commentary that sugar’s potential for abuse, coupled with its toxicity and pervasiveness in the Western diet, make it a primary culprit in a worldwide health crisis. They believe that sugar should be controlled like alcohol and tobacco to protect public health. Read more.

“Bottom line: Sugar is the poison, fiber is the antidote,” Lustig said. “Eat less sugar, eat more fiber. How do you do that? It’s called: Eat real food.”

That’s not easy. Ninety percent of the world’s food is controlled by nine food conglomerates, he said, which all use high-fructose corn syrup and are profiting despite the economic downturn.

“They’re making money off you while you get sick and die,” Lustig said.

He said all food is inherently good — it’s what is done to it in processing that’s bad, especially adding fructose and removing fiber. 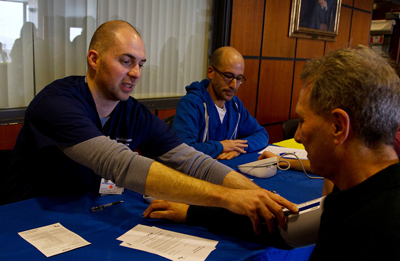 Timothy Groves, RN, who works in the Intensive Care Unit at UCSF Medical Center, tests blood pressure for Dave Santos, who works in the UCSF School of Dentistry Dean's Office, during the wellness expo at UCSF.

“Michael Pollan got it right, Alice Waters got it right and I’m getting it right,” Lustig said. “Don’t worry about a diet. Just eat food, and you’ll be fine.”

Two days earlier, he had finished the draft of his book, “Fat Chance: Gambling on our Personal and Public Health,” which is scheduled to come out early next year.

Lustig’s Jan. 18 talk was part of a daylong wellness fair that included free lunches, fruit and vegetable giveaways, yoga and vendor booths on everything from nutrition counseling to sleep disorders. UCSF is working on multiple fronts to create a supportive work environment for its faculty, staff, students and trainees and its goal is to be the workplace of choice for diverse, top-tier talent, one of five key initiatives in the three-year strategic plan outlined by UCSF Chancellor Susan Desmond-Hellmann, MD, MPH.

UC Berkeley sociologist Christine Carter, PhD, gave a lecture on how to raise happy children. She said most people are too busy and equate this with self-importance. A good remedy is to avoid multi-tasking, to rest and simply cut out some things.

Carter also urged parents to focus on their own happiness because it is a skill in which children can model behavior. She added that it’s useful to realize emotions are contagious — they spread virally and neurally.

Carter was introduced by Mark Laret, chief executive officer of UCSF Medical Center and UCSF Benioff Children’s Hospital. “We’re finally investing significantly in prevention and wellness at UCSF,” he said, adding that it will become even more important as the University looks into becoming self-insured.

Later in the afternoon, UCSF social psychologist Judith Moskowitz, PhD, MPH, lectured on positive emotions, stress and well-being. She detailed the impact of mindfulness, gratitude and acts of kindness, and even included a quote from painter Henry Matisse: “There are always flowers for those who want to see them.” 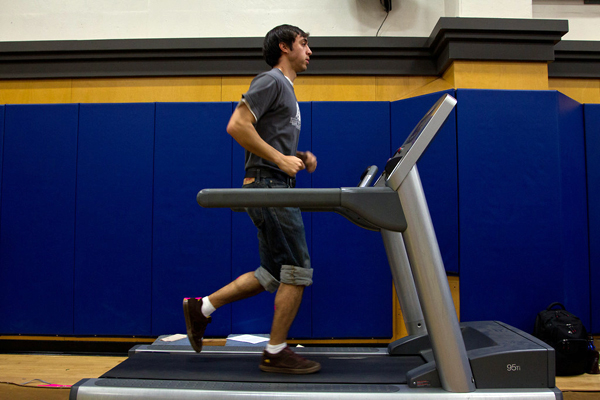 Emmanuel Jauregui, a second-year medical student, takes a running test to measure is body alignment while in motion at the UCSF Orthopaedic Institute's booth at the wellness expo.