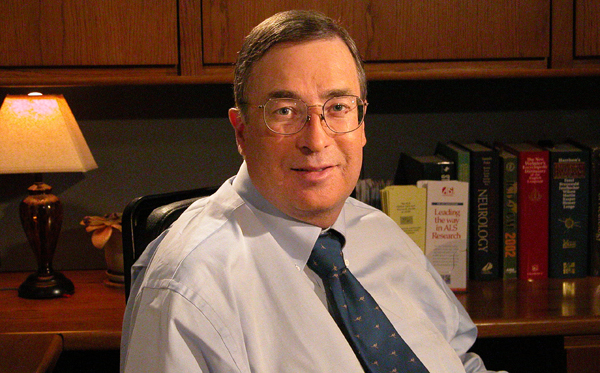 Richard K. Olney, MD, founding director of the ALS Treatment and Research Center at UCSF and a pioneer in clinical research on amyotrophic lateral sclerosis (ALS), has died at age 64, following his own eight-year battle with the disease.

Olney used the tragic irony of his diagnosis – which occurred 18 years after he began focusing on ALS as a physician and researcher – to create public awareness about the condition. He did many interviews with the national and local press beginning in 2004, the year he was diagnosed, even as his condition deteriorated dramatically.

ALS, commonly known as Lou Gehrig’s disease, is a progressive, fatal disease in which motor neurons in the brain and spinal cord degenerate. Patients gradually lose control of their muscles, while their minds generally remain intact.

Current research focuses on what genetic and environmental factors may make people susceptible to the disease, which is not contagious. Olney did not have a family history of ALS.

Throughout his 25-year career, most of it at UCSF, Olney, UCSF professor of neurology, was interested in the diagnosis and management of motor neuron diseases, which include ALS. He joined the UCSF faculty in 1985 and his increasing clinical focus on ALS led to his establishment of UCSF’s ALS clinic in 1993, with one nurse and a physical therapist.

In 1999, the clinic became the UCSF ALS Center and Olney served as its first director, a post he held until August 2004 when the disease’s progression forced him to resign. 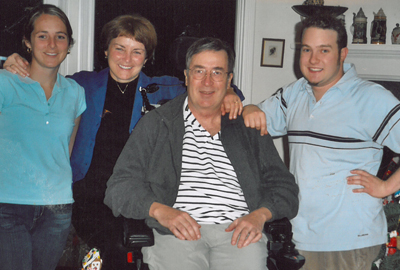 Photo courtesy of the Olney family

Under his leadership, the center grew to its current caseload of more than 375 patients, providing services in multiple disciplines, involving a neurologist, a nurse, a physical therapist, a respiratory therapist, an occupational therapist, a speech pathologist, a dietician, a communication specialist, a social worker and representatives from the ALS Association and the Muscular Dystrophy Association (MDA), who advise patients and families about available support programs.

In 2001, the center received the prestigious designation of “ALS Center of Excellence,” from the ALS Association and the MDA, making it one of only 16 such centers in the United States at the time. The designation, held by only two centers in California, is granted to those programs that offer advanced diagnostics and comprehensive patient care, provide access to the latest drug trials, and conduct clinical research aimed at identifying therapies.

Olney was known internationally for his excellence as a physician, teacher and clinical researcher. In his role as an investigator, he studied potential drug therapies and the disruption in nerve signaling that occurs in ALS and other neuromotor diseases. He refined the statistical method for measuring the rate of ALS progression and, together with UCSF neurologists Catherine Lomen-Hoerth, MD, PhD, and Bruce Miller, MD, director of the UCSF Memory and Aging Center, defined the links between ALS with features of other neurodegenerative diseases, such as fronto-temporal dementia (FTD).

In the year before his diagnosis, Olney and Lomen-Hoerth – now the director of the ALS Treatment and Research Center at UCSF and Olney’s personal physician – developed a clinical trial to investigate whether two drugs used to combat AIDS and cancer might slow or halt the progression of ALS in some patients.

In January 2005, Olney became the first test subject in this clinical trial. Because it was a placebo-controlled, “blinded” study, neither he nor Lomen-Hoerth, would know for six months if he was receiving the drug.

“It was typical of Rick to put the value of the medical research before himself and not take the drugs outside the boundaries of the trial,” Lomen-Hoerth said. “He knew it was highly unlikely that a treatment would be found during his lifetime, but nothing was going to stop him from doing whatever he could to advance the research.”

When the blinded period of the clinical trial ended, Olney and Lomen-Hoerth learned he had received it. “It may have helped,” Lomen-Hoerth said. “It’s hard to know. Early-stage clinical trials like this involve low doses that are designed to test drug safety, as opposed to efficacy.”

“He’s an inspiration to a whole generation of students who studied under him,” she added. Lomen-Hoerth completed her National Institutes of Health-funded post-doctoral fellowship at UCSF under Olney’s mentorship in 1999.

“His life and career inspires us all to redouble our efforts to find answers to this cruel neurological problem, and to continue to provide best patient care for our patients with ALS,” said Stephen L. Hauser, MD, chairman of the UCSF Department of Neurology. “The ALS Center at Moffitt-Long Hospital, and the new Neuroscience Research Building at Mission Bay, will carry on in Rick’s magnificent tradition. He always will be remembered as an inspiration to physicians and scientists of UCSF and beyond who are dedicated to finding answers to ALS. We were very lucky to have had him in our midst.”

Lucie Bruijn, PhD, chief scientist of the ALS Association, remembered Olney “not only as a courageous person with ALS, but someone who was an outstanding clinician and scientist who made major contributions both for patients and the scientific field.

“He has been an inspiration to those of us who work every day toward the goal of finding meaningful therapies for ALS. It is an honor to have known him personally and the ALS Association is proud to have funded his important studies to identify genetic and environmental influences that impact the disease.”

In 2005, Olney helped to raise awareness about ALS by appearing in a public service announcement produced by the ALS Association.

Olney is survived by his wife of 38 years, Paula, and two children, Amy Koch Olney Dobbs (husband Ryan Dobbs), an occupational therapist at California Pacific Medical Center, and Nicholas T. Olney (wife Caroline Olney) and grandson Richard Knox Olney, all of the Bay Area. Nicholas, inspired by his father’s illness, decided to become a physician. He graduated from UCSF School of Medicine last spring, is carrying out his internship in internal medicine, and will conduct his residency in neurology at UCLA.

Even though Olney became significantly immobilized by his disease, having lost virtually all muscle control and communicating only by moving his pupils across a computer tablet, he remained actively engaged in his family, watching his two children marry, serving as his son’s best man, and participating in the life of his grandchild, who was born last spring and named in his honor.

Olney was the author of numerous research articles, associate editor of Muscle Nerve, and a member of the editorial boards forAnnals of Neurology, Clinical Neurophysiology, and the  Journal of Clinical Neurophysiology. He also served as a member of the board of directors of the American Association of Electrodiagnostic Medicine and as a councilor of the neuromuscular section of the American Academy of Neurology.

A private memorial service will be held.

Sampling of the many news articles featuring Richard Olney following his diagnosis:

CBS Sunday Morning
The Doctor and the disease
“Doctor battles ALS, the disease he spent a lifetime researching”
May 22, 3005
http://www.cbsnews.com/stories/2005/05/22/sunday/main697074.shtml