A Bay Area athlete is chasing his dreams of competing in the 2012 Paralympics with the help of experts at UCSF. And while he has yet to qualify for the global competition, he’s already beating his disability.

Ranjit Steiner, 20, doesn’t lack the speed, strength or passion. The only thing that he's missing is his right leg.

In 2006, while returning a kickoff during a football game at Gunn High School in Palo Alto, Steiner tore his ACL. After getting an MRI for the injury, his doctor discovered a large tumor on Steiner’s right femur. 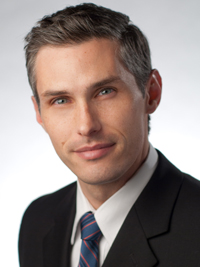 The tumor was surgically removed in Palo Alto and Steiner underwent chemotherapy. But as the months stretched on, his leg was crippled by multiple surgeries and infection. Steiner finally made the decision to amputate. The procedure was done by orthopaedic surgeon Richard O’Donnell, MD, at UCSF.

“I couldn’t even go out and throw the football with my friends without worrying about hurting the leg,” said Steiner. “Getting rid of it actually was like getting rid of a dead weight.”

As a new amputee, Steiner began to work with Matthew Garibaldi, CPO, director of the Orthotics and Prosthetic Centers at UCSF. Even before he could operate a walking prosthesis, Steiner told Garibaldi he wanted to run. Within six months, he was not only walking, but learning to navigate stairs and, yes, learning to run on a custom-built running leg.

“When you have someone young and athletic, that excites us as prosthetists,” said Garibaldi. “We’re here to help them achieve their goals.”

Now in the middle of his junior year at University of Oregon, Steiner has started to train four days a week in hopes to qualify for the 100-meter sprint and long jump competitions at the 2012 Paralympics in London.

“Being an athlete and staying active has always been a big part of my life,” said Steiner. “None of that changes just because I’m missing a leg.”