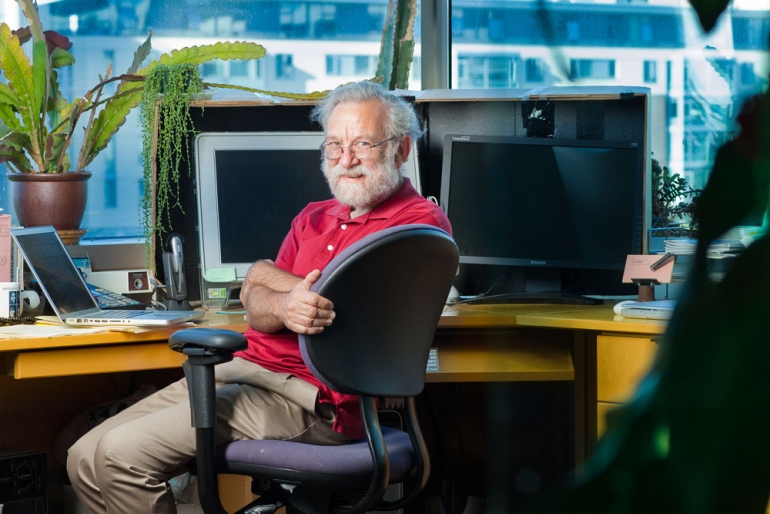 Peter Walter, PhD, a professor in the Biochemistry and Biophysics Department within the School of Medicine at the University of California, San Francisco has been awarded the 2012 Paul Ehrlich and Ludwig Darmstaedter Prize for his “outstanding research achievements in the field of cell biology.”

The €100,000 (About $131,000) German award specifically recognizes Walter’s work over the last two decades on how cells cope with stress—insight that has profound implications for understanding and treating numerous human diseases, including cancer, diabetes, cystic fibrosis and neurodegenerative disorders.

The prize will be awarded in a ceremony in St. Paul’s Church in Frankfurt on March 14, the birthday of immunologist Paul Ehrlich (1854-1915), a German scientist who was a towering figure in medicine at the beginning of the 20th century.

“This prize is one of the top international awards given every year for medical research, and it is a wonderful recognition of Dr. Walter's work,” said Sam Hawgood, Dean of the UCSF School of Medicine. “His research captures the best this field has to offer—fundamental science revealing life’s mysteries at its smallest scale and with huge implications for human health worldwide.”

Past recipients have included Walter’s UCSF colleagues Elizabeth Blackburn, PhD, who won the prize in 2009, and Stanley Prusiner, MD, who won the award in 1995. Both Blackburn and Prusiner also won the Nobel Prize for their work.

Over the last 18 years, Walter and his colleagues have investigated an intracellular process known as the unfolded protein response, which multi-celled organisms use to deal with stress and avoid poisoning their own tissues.

The unfolded protein response regulates the processing of proteins, which all cells produce in great abundance. Some secretory cells in the body make and release the equivalent of their own weight in proteins every single day.

Protein production is tightly controlled, however, to ensure that the body does not poison itself by releasing toxic proteins that are not processed correctly. The unfolded protein response is one of the main ways cells maintain this control.

Those decisions happen in an involuted compartment found within cells known as the endoplasmic reticulum (ER), which can be thought of as a cell’s warehouse and way station rolled into one. The vast majority of all the proteins a cell produces are assembled, processed, and packaged there, and the ER ensures that proteins are folded correctly into their final shape and that no misfolded, and potentially malfunctioning and toxic, proteins are released into surrounding tissues.

The ER warehouse can become overworked and too crowded at times, putting stress on cells. When stressed, cells can exercise a sort of nuclear option, switching on a program known as apoptosis and killing themselves. The unfolded protein response is a fail-safe switch in this mechanism. It can pull a cell back from the edge by making more ER, expanding capacity for more proteins to fold properly, thereby relieving the stress.

A few years ago Walter discovered the lynchpin in the process, a protein known as IRE1. This protein is a molecular detector in the ER that gauges when things become too crowded and triggers cell changesthat expand ER space.

This process can also go awry, and when it does, it can lead to a number of different diseases, including cancer. In multiple myeloma, for instance, IRE1 appears to go haywire and the cancer cells “forget how to die,” as Walter described it.

Blocking the IRE1 protein with small molecules may help people with this form of cancer, he said—a therapeutic possibility that Walter and his colleagues are actively pursuing.

“The Paul Ehrlich and Ludwig Darmstaedter Prize is particularly special to all of us in the Department of Biochemistry and Biophysics at UCSF because it is an award in the field of medicine that has been conferred upon one of our celebrated basic scientists,” said Graeme Davis, PhD, Albert Bowers Professor at UCSF and Chair of the Department of Biochemistry & Biophysics.

“Tackling fundamental questions with direct relevance to human health is something that we all aspire to,” Davis added.

A native of Berlin, Peter Walter, 57, studied chemistry as an undergraduate at the Free University of Berlin and obtained a Master of Science degree in organic chemistry from Vanderbilt University in Nashville, TN, on a German Academic Exchange Service grant. From 1977 to 1981, he conducted doctoral research at the Rockefeller University in New York in the laboratory of Nobel laureate Günter Blobel. He was named assistant professor at Rockefeller University in 1982 and came to UCSF a year later, joining the Department of Biochemistry and Biophysics.

Since 1997, Walter has been an investigator of the Howard Hughes Medical Institute. He is also a member of several prestigious scientific societies, including the German Academy of Natural Scientists Leopoldina, the U.S. National Academy of Sciences and the European Molecular Biology Organization. He is a co-author of the textbook Molecular Biology of the Cell, one of the most world's most widely used standard works in the field of cell biology. Among his many awards are the Eli Lilly Award in Biological Chemistry, the Passano Award, the Searle Scholar Award, the Alfred P. Sloan Jr. Prize, the Wiley Prize in Biomedical Sciences, the Stein & Moore Award and the Otto Warburg Medal.

The Paul Ehrlich and Ludwig Darmstaedter Prize honors scientists whose research has furthered understanding within Paul Ehrlich’s fields of interest, especially immunology, cancer research, hematology, microbiology and chemotherapy. The award will be presented by Prof. Wilhelm Bender, chairman of the Trustees of the Paul Ehrlich Foundation, together with a representative of the Federal Ministry of Health. The prize, awarded since 1952, has been financed by the Federal Ministry of Health through earmarked donations from companies and the Association of Research-Based Pharmaceutical Companies.