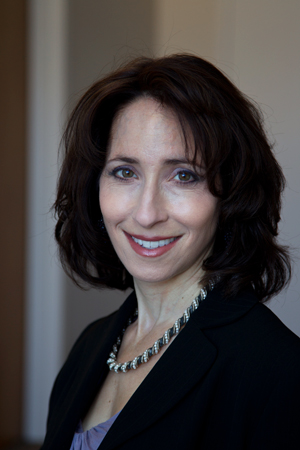 Elissa Epel, PhD, an associate professor in the Department of Psychiagtry at UCSF, studies the impact of chronic stress on health.

A new study indicates that many humans might be “self-medicating” when faced with chronic stress, by eating more comfort foods containing sugar and fat. In the long term, the habit may dampen down the body’s stress response, governed by the hormone cortisol, according to UCSF researchers.

In a study of 59 healthy, pre-menopausal women published in the November issue of the journal Psychoneuroendocrinology, UCSF psychologist Elissa Epel, PhD, and her colleagues found that among women who ranked in the top quarter for chronic life stress, having more abdominal fat was associated with lower daily cortisol secretion, and with less hormone secretion in response to acute stress.

“It is very likely that comfort food intake is a double-edged sword — leading not only to a dampened-down stress response system, but also to greater levels of risky abdominal fat, ” Epel said.

Dallman, a UCSF endocrinology researcher, earlier pioneered studies in rats of the connections between stress, the secretion of cortisol and the build-up of abdominal fat. Abdominal obesity results when chronic stress causes chronic secretion of glucocorticoid hormones, such as cortisol, she found.

In another recently published study on stress and eating, UCSF psychologist Elissa Epel and Jennifer Daubenmier from the UCSF Osher Center for Integrative Medicine found that mastering simple mindful eating and stress-reduction techniques helped prevent weight gain in heavy women, even without dieting.

Initially, chronically stressed rats pump out more cortisol, and had a stronger hankering for lard and sugar in comparison to unstressed rats. They get fatter, with the fat build-up concentrated in abdominal fat. But after putting on fat, the rats’ cortisol secretion becomes blunted in response to acute stress, and their day-to-day glucocorticoid secretion goes down as well. The hormone system that controls cortisol secretion, known as the hypothalamic-pituitary-adrenal (HPA) axis, was turned down.

“The rats appeared to be self medicating,” Epel said. “Their stress eating in turn dampened their HPA-axis activity.

We wanted to know if this happened in people as well.”

Food Used as a Cheap Drug

For the Psychoneuroendocrinology study, the UCSF researchers used scientific surveys to gauge life stress levels and level of emotional eating in the women, and measured cortisol during their normal daytime, as well as in the lab during a stressful task. To induce a state of acute stress in the lab, the women performed tasks such as a five-minute, public, videotaped speech presentation.

The researchers found that women who were the most stressed out were the most likely to report that they eat more in response to emotional upsets. These highly stressed women had significantly more abdominal fat, on average, in comparison to women who did not experience such a high degree of chronic stress.

Among women who ranked in the top quarter for chronic life stress, having more abdominal fat was associated with lower daily cortisol secretion, and with less hormone secretion in response to acute stress. Among the rest of the women these relationships were not statistically significant.

“This is the first demonstration of the potential existence of the chronic stress response network — as we understand it in rats — in humans,” Epel said.

“There is no question that food is used as a cheap drug.

It makes us feel better, at least for a very short while,” Epel said.

Because the women were not monitored over time, it’s not clear if, as in the rats, getting fatter preceded a dampening down of the hormonal response. The answer awaits further study.

In another recent study Epel and colleagues found that heavy women who practiced stress reduction and mindful eating techniques decreased their stress levels and didn't gain weight over time, while those in the wait list group did gain weight.