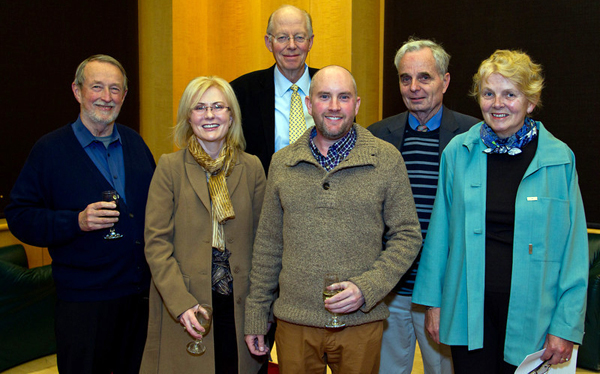 At a recent book release party at UCSF, are, from left, Henry Bourne, MD, author of a new book, "Paths to Innovation;" Dorothy Porter, PhD, author of "Health Citizenship;" Orlo Clark, MD, co-author of "The Remarkables;" Brian Dolan, PhD, professor and director of the division of social medicine, and co-director of the University of California Medical Humanities Consortium, and contributing editor to "The Healing Art of Writing;" David Watts, MD, poet, NPR commentator, filmmaker, musician, author of "The Healing Art of Writing," and Carol Clark, co-author with her husband, Orlo, of "The Remarkables."

When Henry Bourne retired in 2008 after 39 years at UCSF, he wasn’t sure what to do next.

“I had run a lab for decades and I had an illusory sense of well-being,” said Bourne, MD, professor emeritus and former chair of the Department of Pharmacology. “And suddenly it didn’t matter whether I was there or not. I went through a period of feeling a bit despondent about that. I decided what I wanted to do was write.”

What he produced is a 338-page book that chronicles UCSF’s metamorphosis in the 1970s from a provincial campus into a major center for biomedical research. The book, titled “Paths to Innovation: Discovering Recombinant DNA, Oncogenes, and Prions, in One Medical School, in One Decade,” is among the first five books published by the University of California Medical Humanities Consortium.

“It’s a book that describes how very important discoveries were made over a period of eight years, in the 1970s, within a diameter of 150 yards, by four different people, three of whom won Nobel prizes,” Bourne said. “They changed the whole face of biology and medical care.”

These game changers are:

The publication of Bourne’s book “couldn’t be more appropriate timing since we’re building up to the celebrations of the 150th anniversary of UCSF,” Brian Dolan, co-director of the UC Medical Humanities Consortium, said at a book-signing party in the Kalmanovitz Library on the Parnassus campus on Dec. 7.

Bourne described Boyer, Bishop, Varmus and Prusiner as wild cards in the academic deck who all arrived at UCSF between 1966 and 1970, joining a cadre of exceptional leaders he called the face cards. One of his main goals was to figure out how their bursts of discovery could all occur at once, which meant taking a look at what UCSF was like then.

“Neither the wild cards nor the face cards were attracted to UCSF because it was a wonderful academic center,” said Bourne, 71, a would-be novelist and former newspaper reporter in his native Virginia. “It absolutely was not. But it was a place where they could be free to do what they wanted to do without interference.”

They came to California, from places such as Columbia, Harvard and Yale, for the same reason the late Harvey Milk, a trailblazer in the gay rights movement, was drawn to the state, Bourne said. 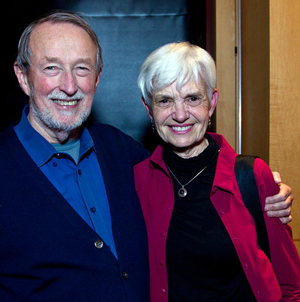 Author Henry Bourne, emeritus professor, with his wife, Nancy, at a reception celebrating the release of his book and three others.

“This was not about sexual orientation but scientific orientation,” he said. “California was a place where you could be an adventurer. Discovery requires resources, a sense of adventure, a drive, originality and intelligence. UCSF’s myth is that a group of leaders recruited all these wonderful folks and they did wonderful things. But it was much more inadvertent.”

The four wild cards were virtually ignored by everyone for the first six or seven years they were at UCSF, he said. “Nobody knew they were as good as they were. Nobody was interested in anything they did. And nobody was keeping score. That was really important. They all profited from that in different ways.”

Reconciling the myth and the reality was one of the main things he enjoyed about writing the book, which he found just as challenging as running a lab, though “a tad more lonely,” as he put it.

“There were surprises,” he said. “In science, surprise is what everyone is looking for. That’s what I spent my scientific career doing. And here it was falling into my lap.”

The end of the book compares the 1970s with the state of things today. Bourne said the whole atmosphere of biomedical sciences is now much more averse to risk and is fueled by the need to hit pay dirt quickly, which is inimical to innovation. He added, however, that UCSF is still probably the very best place in America to be an assistant professor.

“I hope this book will be read by a lot of young people,” he said. “And I want everyone to realize what a delicate and chancy thing science is, and that it has to be fostered. That doesn’t mean throwing money at it. What happens in the lab is a deeply personal and extremely fragile kind of thing. The people who make these discoveries are extraordinary. Early on it’s really easy to destroy them.”

Bourne’s enthusiasm about his own book, which has gotten stellar reviews, is surpassed by his fervor about the unique publishing venture that produced it.

“It’s the most exciting thing in some ways, especially considering the current academic and economic climate,” he said. “It’s a sign of the way creativity feeds on itself and can grow.” 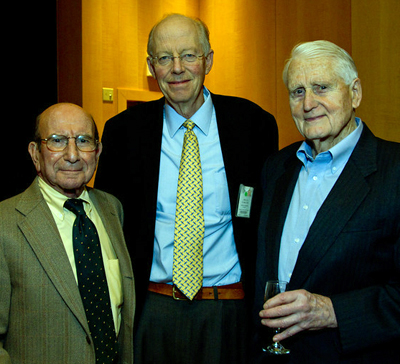 The UC Medical Humanities Consortium is a multi-campus collaborative that also includes UC Berkeley, UC Davis and UC Irvine. It is funded by a grant from the University of California Office of the President.

The five books marking the consortium’s debut include three others tied to UCSF. “The Healing Art of Writing” was edited by Dolan, David Watts, PhD, of UCSF, and his wife, Joan Baranow, PhD. “The Remarkables: Endocrine Abnormalities in Art,” was written by Orlo Clark, MD, of UCSF, and his wife, Carol Clark. “Health Citizenship: Essays in Social Medicine and Biomedical Politics,” was written by UCSF’s Dorothy Porter, PhD,

“Each book represents a different view of the medical humanities,” said Dolan, a UCSF professor in the history of health sciences, who mentioned art, history, the sociology of scientific knowledge and creative writing. “The main thing we wanted to do was produce scholarship that shows what interdisciplinary work can do.”