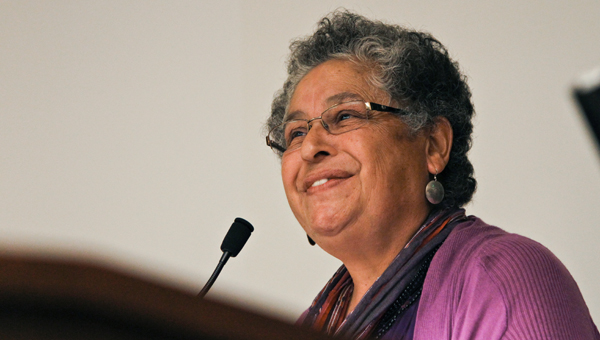 Projects involving UCSF and community partners that encourage children to learn about medical careers, maintain proper dental hygiene and lose weight by learning to swim were recently celebrated for improving the health and well-being of San Franciscans.

“Working together is much more powerful than working alone,” said Estela Garcia, executive director of Instituto Familiar de la Raza. “... I’m certainly one of those people who believes this is the direction to go.”

Garcia delivered the keynote address at the Third Annual Partnerships Celebration of UCSF’s University Community Partnerships (UCP) at Genentech Hall, where other participants at the event echoed her sentiments about the importance of collaborating on projects that strengthen the community.

Garcia was born in the Central Valley and is the daughter of farm workers. She said her grandfather was a community organizer in the 1920s and she was raised with the concept of community empowerment.

She talked about the collision of two very different cultures – the university and nonprofits – and how to develop and sustain healthy and successful working relationships that result in “making a difference out in the street.”

“We can’t be satisfied with where we’re at,” she said. “We have to continue to strive because we’re not at health equity yet.”

University officials agree. John Stobo, MD, senior vice president in Health Sciences and Services in the University of California Office of the President, said academic health centers are very special institutions that have to put society’s best interests ahead of their own.

“Increasingly, the success of academic health centers will not simply be judged or based on what they do in research, education and clinical care, but by the value they add to their communities,” Stobo said. “And their leaders will also be judged (that way), and not only by where their center sits in U.S. News & World Report or the amount of [National Institutes of Health] money that’s generated.”

He was interrupted by applause from the audience.

Stobo said he recently asked UC’s five medical centers and medical schools to start cataloging their community partnership programs, partly to “raise the flag” in terms of their importance at UC.

For its part, UCSF has historically had a strong but uncoordinated presence of community outreach activities in San Francisco and beyond. UCSF established the University Community Partnerships Office in 2005 in part to coordinate more productive partnerships between philanthropy, local government, community-based nonprofits and UCSF. These activities are overseen by the UCP Council, which includes representatives from both the University and community.

Jeffrey Bluestone, PhD, executive vice chancellor and provost at UCSF, said the work being done by the UCP is as innovative as anything being done at the University, if not more so. “We in the leadership of UCSF feel incredibly committed to this program,” he said.

This year, the program included 12 grant recipients and five partnership grants involving UCSF, along with the three major award recipients honored at the UCP celebration.

Preparing Students to Be Fit and Ready

“This is a program that was created by UCSF medical students in 2002 to promote the vision of ethnic and economic diversity in the health professions,” Mendoza said. “So what this means is they go out and reach out to our kids, and they show them what the medical profession could be like for them.”

Darlene Conwell, associate director of Upward Bound Math & Science at the University of San Francisco, said about 17 low-income high school students, whose parents do not have a postsecondary degree, have gone through the program, now in its third year. 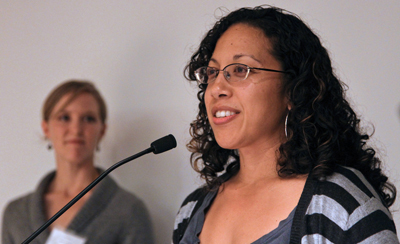 Tavi Baker, a community member of the University-Community Partnerships Council, and Maria Martin in the background.

UCSF MedLink projects vary. In summer 2009, students created a fictitious major disaster. They had to keep people safe and evacuate the city, and they took on such roles as an engineer, doctor and chief financial officer of a pharmaceutical company.

“It was a wonderful brainstorm,” said Conwell, who added that students also have created their own websites, done papers researching careers that interest them, and looked at body parts that UCSF medical students bring for presentations, such as a diseased liver or a brain that might have cancer.

The students live throughout San Francisco, including Bayview-Hunters Point, the Tenderloin, Chinatown and the Western Addition. Some are reluctant to be dropped off at their doorsteps because they see Conwell as being from another world — until she shares her experiences with them.

She grew up in East Palo Alto and her father died of a gunshot wound. Conwell herself graduated from an Upward Bound program through Stanford University. It took her eight years to get a bachelor’s degree from San Jose State before going on to earn a master’s in educational technology from USF.

“We recognize they have potential,” Conwell said. “It just has to be cultivated in a different manner sometimes, outside the high school setting. In high school, you could just get missed. Without these partnerships, we couldn’t prepare students to be fit and ready.”

“Oral health is so important, as we know, across the life span,” said George Taylor, DMD, MPH, DrPH, the newly arrived chair of the Department of Preventive and Restorative Dental Services at the UCSF School of Dentistry.

Taylor presented the award for the project, which is trying to improve the oral health of preschoolers from underserved, low-income families in the city and also to provide a chance for dental students to build skills.

Third-year dental student Kaitlin Jennison was singled out for starting a midday tooth-brushing project at preschools that serve needy children. “For some of the children, this is the only time they brush their teeth each day,” she said later.

Jennison works in collaboration with a public health nurse. They provide bubblegum-flavored toothpaste, use oral-hygiene puppets and skits to teach children how to brush their teeth, and show teachers how to perform the routine with the children after lunch. They also install toothbrush racks for proper storage and give schools all the supplies they need at no cost.

The Staff and Community Partnership Award went to Physical Activity Referrals to the Community (PARC), which works with the Boys & Girls Clubs of San Francisco and the UCSF Weight Assessment for Teen and Child Health (WATCH) program. The pilot project, which began last fall, referred more than 50 low-income obese patients to the Boys and Girls Clubs’ Learn to Swim program.

“It’s really great to have a tangible project,” said Tavi Baker of the Boys and Girls Clubs, who usually focuses on longer-term endeavors. She accepted the award from Rachael Kagan, chief communications officer at the UCSF-affiliated San Francisco General Hospital.