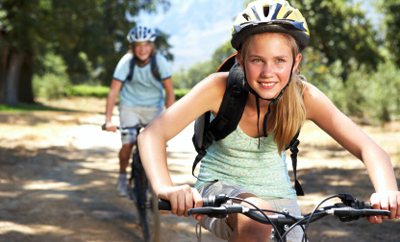 A recent study of 904 adolescents who were told about ways to prevent injuries and illness by their primary care provider was most effective in curbing risky behavior in the area of helmet use when riding bicycles, skateboarding or rollerblading.

A new study has found that providing preventive services to adolescents in a primary care setting can lessen certain kinds of risky behavior.

The research, published in the November 2011 issue of the Journal of Adolescent Health, was led by Elizabeth Ozer, PhD, a UCSF associate professor of pediatrics in the Division of Adolescent Medicine, and was conducted in three Kaiser Permanente clinics in Northern California.

The study examined the effect of screening and brief counseling for risky behaviors by a primary care provider during a teenager’s annual wellness checkup, followed immediately afterward by a discussion with a health educator.

The 904 adolescents in the study were 14 years old when the first risk assessment occurred at the time of their visit with their primary care provider; a second risk assessment and visit took place a year later when they were 15.

The strategy was most effective in the area of helmet use when riding bicycles, skateboarding or rollerblading. It was promising in terms of increasing seat-belt use and decreasing smoking among males. And it pointed to a trend, not statistically significant, of delaying the beginning of sexual activity. It appeared to have no effect, however, on experimenting with drugs and alcohol.

“There were concrete things people did,” Ozer said. “In addition to discussions with their provider, health educators would make sure kids would have a helmet. Our rates of screening for helmet use were where we had some of the biggest bang for our buck. It may be because helmet use is a relatively simple topic to discuss and to do something about. And we might see change in other areas as the teens get older and are engaging in more risky behavior.”

She said the research builds on her team’s previous publications that have shown that it is possible to dramatically increase the screening and counseling of adolescents in primary care, and is the first study to integrate a broad range of clinical services into primary care practice and then follow adolescent patients longitudinally to assess whether these discussions change their behavior.

“This is really a good first step” Ozer said. “Certainly, we need more work and more focus because this is such an important area.”

The study was titled “Does Delivering Preventive Services in Primary Care Reduce Adolescent Risky Behavior?” It said that “most adolescents visit a health provider at least yearly, providing the opportunity to integrate prevention into clinical encounters.” It also pointed out that the majority of health problems and deaths during adolescence are preventable and related to behaviors such as risky sexual activity, substance use and vehicle-related injuries.

The article was accompanied by an editorial from a researcher in Australia, who wrote: “Despite the rationale and support for clinical preventive services for adolescents, there is little evidence available on the benefits and costs of preventive programs.”

The editorial said the study by Ozer’s team had “significant strengths” and “bravely tackled design and measurement issues to provide encouraging evidence on the effectiveness of clinical preventive primary care services for adolescents.”

The visit with the health care provider, usually a pediatrician but occasionally a nurse practitioner, lasted 24 to 30 minutes. The follow-up talk with a health educator ranged from 15 to 30 minutes, depending on the adolescent’s level of risk.

“The idea was to pick up on what the provider had talked about and reinforce the same messages, as well as facilitate referrals and set goals that are manageable and doable,” Ozer said. “But we weren’t scripting anyone.”

For example, teenagers who said they always used a helmet received brief but positive reinforcement. If they said they used one only on long trips rather than when they were going around the corner, the health provider might point out that most accidents happen within a few blocks of the home, which means it’s really important to wear a helmet during every outing.

“There has to be something that connects — like the fact that smoking might make their acne worse or make them smell bad,” Ozer said. “Just giving them statistics doesn’t connect with them. Long-term consequences are not that salient.”

She said doctors and nurse practitioners avoided lecturing. Instead, they offered concrete suggestions and tried to make it clear that their frame of reference was health rather than a moral issue.

“I’m a psychologist and my area is behavior change — and it’s not very easy to change behavior in general,” Ozer said. “It’s even more difficult when you try to do multiple behaviors at a time.”

She said one of the reasons her team’s study is the first to track behavioral outcomes is that most research hones in on a specific area, such as a substance use intervention or a sexual activity intervention.

“But providers are being told they’re supposed to be doing all these things at once,” Ozer said. “So, we really need to be measuring and assessing and evaluating if this is even possible in a real-life busy, clinical setting. And if they do it, does it make any difference?”

The editorial in the Journal of Adolescent Health concluded: “The time has come to grow the evidence base supporting preventive interventions by building on what Ozer et al have done to tackle the challenges of scientifically assessing health outcomes, potential harms and cost-effectiveness. Only then will we make further progress in proving that an ounce of prevention really is worth a pound of cure.”