In 1993, UCSF’ s Cynthia Kenyon, PhD, and colleagues discovered a gene that, when mutated, doubles the lifespan of the miniscule roundworm C. elegans. Today, her lab is investigating drugs in human cells that could extend the health and lifespan of people. 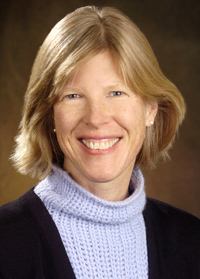 Kenyon discussed the state of the science at a TEDGlobal conference in Edinburgh last summer. The presentation, recently posted, is available here. So far, there have been more than 103,000 hits on the video, an indication that life – and lifespan – is of interest to many.

As seen on the big TED screen, C. elegans, formally known as Caenorhabditis elegans, undergoes an aging process much like humans, if faster. As it approaches its thirteenth day, it is moribund, its formerly supple tissues deteriorating, its body static except for feeble motions of its head. Its mutated brethren, meanwhile, are supple, active and vibrant.

This discovery, and subsequent findings in fruit flies, mice and humans, have revealed that genes regulate hormones that affect the rate of aging. The pathways these genes control have the ability to turn on or off a host of repair mechanisms that normally are inactive. One of the goals of Kenyon’s lab is to identify drugs that could turn on the proteins that control these processes to delay aging and age-related diseases.

“I’m really optimistic,” she told the TED audience, “and it won’t be too long, I hope, before this age old dream begins to come true.”