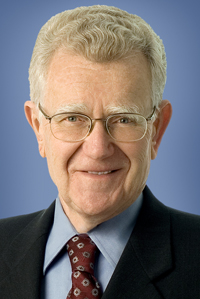 Mahley is also a professor of pathology and medicine at UCSF, with which Gladstone is affiliated.

The Distinguished Scientist Award is the highest honor that the American Heart Association (AHA) can give a scientist. Mahley is one of just five scientists this year — and the first from Gladstone — to receive the award. He will receive the award today during the annual AHA Scientific Sessions in Orlando, Fla.

Mahley, who founded Gladstone in 1979 before serving as its president for 30 years, is an internationally recognized expert on heart disease, cholesterol metabolism and, more recently, Alzheimer’s disease. Early in his career, Mahley discovered the existence of apoE, a protein that transports cholesterol and helps to regulate cholesterol levels in the blood.

After his arrival at Gladstone, he developed an understanding of the critical role that apoE plays in heart disease. This, in turn, laid the groundwork for the explosion of research related to apoE4, a detrimental type of apoE that is found in 1 in 4 Americans. Today, many scientists believe that apoE4 is linked to brain-cell injury and the progression of Alzheimer’s disease, a devastating neurodegenerative disease that is the sixth leading cause of death in the United States.

“Dr. Mahley has long been an exemplar of excellence in cardiovascular research,” said Garret FitzGerald, chair of the American Heart Association’s Distinguished Scientists Selection Committee. “His penetrating insights and discoveries around apoE have shaped the field, influencing research in both cardiovascular biology and neurodegenerative disease. He is well deserving of this prestigious and exclusive award.”

The American Heart Association, an organization that is committed to reducing the risk of heart disease and stroke, presents the AHA Distinguished Scientist Award to those who have had a significant and lasting impact on the fields of cardiovascular research and medicine. Previous recipients of the award include Nobel laureates Roger Tsien, PhD, of the University of California, San Diego and Martin Chalfie, PhD, from Columbia University.

“Dr. Mahley’s life-long commitment to finding ways to prevent, treat and cure disease has been an inspiration to Gladstone scientists for decades,” said R. Sanders Williams, MD, president of Gladstone. “We can think of no better choice for the AHA Distinguished Scientist Award than Gladstone’s founding president.”

Throughout his career, Mahley has championed the value of “basic” research — in which scientists focus on advancing our fundamental understanding of biology — to develop cutting-edge treatments that improve human health. He recently developed the Gladstone Center for Translational Research to facilitate the movement of aspects of Gladstone’s basic research into therapies that can directly benefit patients. Mahley today continues to explore the exact role of apoE4 in Alzheimer’s. Specifically, he is examining how apoE4 could be modified so as not to influence the progression of this deadly disease.

Several other preeminent organizations have also recognized Mahley for his contributions to science and medicine. For example, he has been elected to both the National Academy of Sciences and the Institute of Medicine, two of the highest honors available for U.S. scientists. He also recently received the Builders of Science Award from Research!America for his leadership at Gladstone, which he helped guide into one of the world’s leading independent research institutes.

The American Heart Association is devoted to saving people from heart disease and stroke — America’s No. 1 and No. 4 killers. It teams with millions of volunteers to fund innovative research, fight for stronger public health policies, and provide lifesaving tools and information to prevent and treat these diseases. The Dallas-based association is the nation’s oldest and largest voluntary organization dedicated to fighting heart disease and stroke.