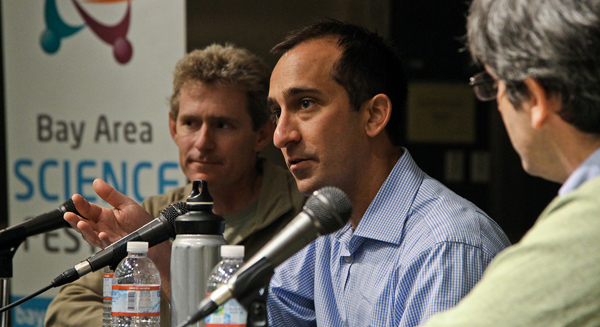 Next time you reach for that second helping, ask yourself, “Is that the bacteria talking?”

The cells of bacteria and other microbes that live inside us and on our skin outnumber our own cells by about ten-fold. Smaller still, undetected viruses unknown to medicine may be lurking within. Other viruses, called phage, attack some of the bacteria that inhabit us, influencing the balance of power. A war goes on inside of us all the time, and we may not even know which warriors are friends and which are foes.

Microbes are so well adapted to us that they even influence our appetites, our immune system and even our nervous systems.

Those fun facts were some of the lessons of “Gut Check,” a lunchtime panel discussion convened on Nov. 4, part of a weeklong series hosted by UCSF as part of the first Bay Area Science Festival.

More serious discussion followed, touching upon the sleuthing of deadly new viruses, the influence of microbes on our susceptibility to debilitating chronic diseases and even the fate of the world’s almond crop, which depends on honeybees. A mysterious disease that appears linked to a previously unknown virus plagues the bees and threatens crops across the Central Valley. 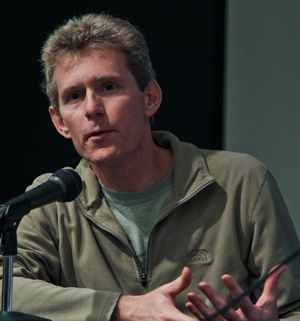 Friday’s panelists included moderator Carl Zimmer, a writer of many popular science books — including “A Planet of Viruses” and “Parasite Rex” —and a frequent contributor to the New York Times; Joseph DeRisi, PhD, a UCSF molecular biologist Howard Hughes Medical Institute Investigator and a pioneer in the development of “microarray” technology now used by scientists worldwide to track down genetic variability; and UCSF researcher Michael Fischbach, PhD, whose goal is to identify potentially therapeutic, drug-like molecules from our own microbes. Fischbach’s research is supported through a prestigious National Institutes of Health Director’s New Innovator Award.

Gut Bacteria May Be a Source of Drugs

“I used to be interested in the kind of microbes that have nothing to do with humans,” Fischbach said. Trained in bioinformatics and the chemistry of small molecules formed during metabolic processes, he searched among the genomes of microbes living in the soil and in the sea for genes that make potential drug-like chemicals. But he discovered that the bugs closer to home, within our own bodies, held the most potential for drug discovery.

Microbes have been the source not only for antibiotics, but also for other types of drugs, Fischbach said. Among them are the popular statins prescribed to lower cholesterol.

Bacteria, capable of evolving quickly, adapt to out-compete microbial competitors. Sometimes they shape human physiology to suit their own needs, according to Fischbach. And in turn, we need them. Studies in “germ-free” mice demonstrate that microbes are needed to develop normal immune system function as well as a means for regulating appetite, Fischbach said. 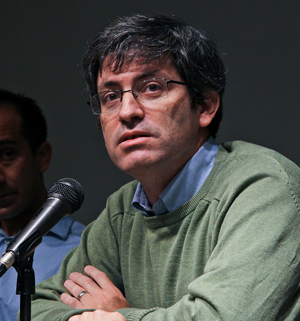 The gut, home to a huge biomass of bacteria, even has its own nervous system, and is responsible for production of significant amounts of serotonin, a key neurotransmitter that plays a role in appetite and mood. “Eighty percent of serotonin in the body is in the gut,” Fischbach said. Serotonin affects how quickly food and bacteria move through the intestines. Bacteria also produce neurotransmitters, which they might use to change levels of serotonin in the brain, Fischbach suggested.

Most of us probably think more often about infectious bacteria and viruses that do not normally reside within us. DeRisi has a special interest in emerging microbial threats that travel under the radar. A decade ago, he and UCSF virologist Donald Ganem, MD, first developed the ViroChip, a three-inch glass microarray slide that contains gene sequences from the encyclopedic spectrum of known viruses. They use the ViroChip to track down unknown viruses from biological samples taken from disease-plagued individuals.

DeRisi, the winner of a John D. and Catherine T. MacArthur Foundation “genius award,” led a UCSF team that was the first to identify the virus that causes SARS —a new member of the coronavirus family, it turned out.

“Our preconceptions of what is going to be lethal or problematic are just preconceptions, and we need to be unbiased,” DeRisi said.  The ViroChip allows DeRisi and others to search for genetic similarities between unknown and known viruses —without preconceptions.

A few years ago, DeRisi identified a virus that causes a respiratory disease that has been killing exotic parrots for decades. He found out that the closest known relative of the virus causes encephalitis in horses and normally is not observed outside of certain villages in Germany.

If you find something new in the viral world, DeRisi said, chances are that you can find something related to it somewhere else in the biosphere. “Zoonotic events,” in which viruses normally hosted by different species combine, will remain a threat, according to DeRisi. The technology now exists to monitor such events, DeRisi said, but it’s not clear that there exists any practical approach for such monitoring.

DeRisi also has identified viruses that might play a role in an epidemic disease of honeybees that is killing off entire bee colonies across the country — with potentially devastating agricultural impacts. Honeybee colonies are rented out in semi trucks and hauled around the country when they are needed to pollinate major crops, such as the California almond groves that supply most of the world’s almonds.

About 100 billion copies of one suspect virus can infect a single honeybee. That’s “an appreciable percentage of the mass of the bee,” DeRisi said.

Fighting microbial pathogens remains humbling, in part because they change so rapidly. The age-old strategy of quarantine and control remain vital in containing epidemics, DeRisi said.

For the same reason, pharmaceutical companies show little inclination to develop new antibiotics, Fischbach said. Inevitably, microbes develop resistance to today’s antibiotic types. “As soon as you introduce it into clinical use the clock starts ticking down.” Some targeted bacterial pathogens develop resistance even before clinical trials are completed, according to Fischbach.

Antibiotics also can disrupt the microbial ecology within us, knocking down beneficial as well as harmful bacteria. Probiotics, cultures of live bacteria thought to be beneficial for health, are easy to find in upscale supermarkets and health food stores, but it’s still early days for scientific studies to evaluate their effectiveness.

UCSF researchers are investigating probiotics as a means to reduce asthma risk in children. UCSF scientists also have found that the lungs are commonly populated by bacteria, and that the bacteria present appear to influence asthma risk.

Given that bacteria, bacteria phage and viruses are rapidly evolving and in a constant arms race, it’s difficult to predict the success of new disease-fighting strategies with confidence. “We need to find a way to use a scalpel approach rather than a carpet-bombing approach,” Fischbach said.