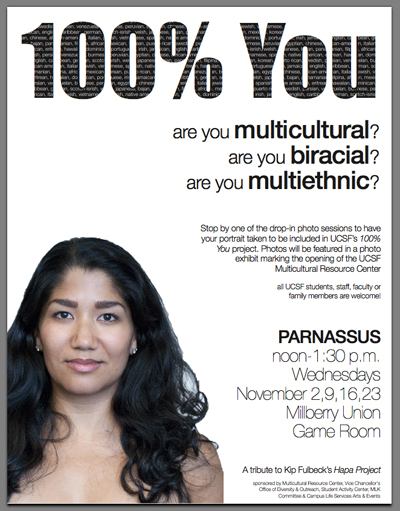 Misty Loetterle, special assistant to the Vice Chancellor of Diversity and Outreach, is photographed here for the "100% You" project that will showcase the photos during the opening of UCSF's Multicultural Resource Center.

A snapshot of the UCSF community is taking shape right now, and it will be a collective self-portrait of sorts called “100% You.”

“There’s been a lot of buzz about it on campus,” said Mijiza Sanchez, director of the UCSF Multicultural Resource Center, who came up with the idea.

People who answer yes to one or more of these questions are urged to stop by a drop-in photo session and have their portrait shot so that they can be included in the project, which will take the form of a mid-January photo exhibit. The sessions will be held from noon to 1:30 p.m. on Nov. 9, 16 and 23 in the Millberry Union Game Room on the Parnassus campus.

Fulbeck, who will be on sabbatical next semester, will do a noon multimedia presentation on Jan. 17 in Cole Hall Auditorium at the Parnassus campus and will later sign two of his books, “Mixed: Portraits of Multiracial Kids” and “Part Asian, 100% Hapa.” The latter was based on the Hapa Project, the model for the UCSF photo exhibit. The heavily tattooed professor received a Distinguished Teaching Award this year from UC Santa Barbara.

The “100% You” photo exhibit will take place at Millberry Union’s Golden Gate Room on Jan. 11, 12, 13 and 17 during MLK Week 2012 at UCSF. The show, a tribute to the Hapa Project, will honor the opening of the Multicultural Resource Center.

“I think it will be a really great way to have a dialogue about some of these issues that people are not comfortable talking about,” Sanchez said.

Students, faculty, staff and their children are welcome to participate in the photo sessions, the first of which was held on Nov. 2. The flyers, which come in 10 different versions, have “100% You” at the top in big black letters. If you look closely, dozens of ethnicities are spelled out inside each letter in white reverse type.

“It’s about celebrating all our heritages,” Sanchez said. “Race is a social construct, so in essence we all have some sort of multicultural or multiracial aspect if we really think about it. One of our faculty members has a biracial son. He said, ‘We’re all multicultural. Is she going to take a picture of everybody?’ He’s 9 years old but he gets it. And that’s kind of the whole point.”

At the photo sessions, which Sanchez described as “powerful tools for telling a story,” people are being asked “Who are you?” or “What are you?” Their handwritten answers are being scanned in and attached to the bottom of their portraits. 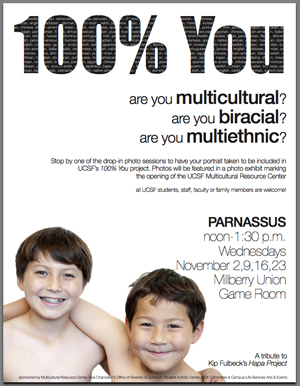 Children smile for the "100% You" photo project at UCSF.

“Because I have a Latin last name, people don’t know what to do with that when they see me because they assume I’m just black,” said Sanchez, who grew up in the New York City borough of Queens. “Or they look at my left hand to see if I’m married to someone with that name because there couldn’t possibly be a black Latina. I’ve gotten more of that here than I ever did in New York, where there are Dominicans and Cubans and Puerto Ricans – the whole gamut.”

Sanchez, who is also a photographer, said the project would not have been possible without David Hand, communications manager for the UCSF School of Dentistry, who is shooting all the photos in the same minamalist style Fulbeck used for the Hapa Project. “He took my vision and brought it to life beyond my wildest dreams, and has been brainstorming this concept with me from day one,” she said.

“The diversity of the campus community is astounding, and one of our great strengths,” said Hand, who has taken thousands of photographs of students, faculty and staff during his six years at UCSF. “I was honored to be asked by Mijiza to help realize her project to showcase and celebrate it. I can't think of a better way to launch the new Multicultural Resource Center.”

Hand has been pleased so far by the enthusiasm and number of people willing to take part. He and Sanchez are hoping for even more as November progresses, especially children and people over 30.

“The individual sessions go very quickly – just a few minutes each – and we don't ask participants to ‘pose’ but instead to just be themselves,” Hand said. “After all, the project isn't about projecting an image but instead about showing up as who we are – being seen. That's part of why participants are photographed without visible clothing or affectation. There's something beautiful and poignant and essential about that.”

“100% You” is sponsored by the Multicultural Resource Center, which is part of the Vice Chancellor’s Office of Diversity and Outreach, and the Student Activity Center, MLK Committee and Campus Life Services Arts & Events.