Premature infants exposed after birth to drugs known as glucocorticoids are at increased risk for having impaired growth of the cerebellum, according to findings from a new UCSF-led study. The cerebellum is a region of the brain associated with balance, motor learning, language and behavior. 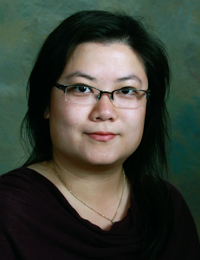 Emily Tam, MD
The findings challenge the recent policy statement of The American Academy of Pediatrics, which suggests that low doses of glucocorticoids — a class of steroid hormones used in premature babies to support lung maturation, the normalization of blood pressure and breathing — can continue to be used in premies. In their 2010 statement, the Academy recommended that high-dose dexamethasone not be given to babies after birth, but stated that the evidence was insufficient to make a recommendation regarding other doses of glucocorticoids. In the current study, published in the Oct. 19, 2011, issue of Science Translational Medicine, the researchers found that betamethasone given to mothers in premature labor was not associated with adverse affects on the baby’s brain growth. However, they found that premature babies given hydrocortisone or dexamethasone in a low-dose range after birth had, on average, 10 percent smaller cerebellar volumes by the time they were full term. “This study provides new evidence that these drugs, even at low doses, are associated with impaired cerebellar development when given to babies after birth,” said Emily Tam, MD, a child neurologist in the Neurological Intensive Care Nursery at the UCSF Benioff Children’s Hospital and lead author of the study. The long-term impacts on cognitive and motor development will need to be assessed through neurological examinations and developmental testing when the children are at school age, she said. However, previous studies have shown that smaller cerebellar volumes in children born prematurely are associated with significant motor and cognitive impairments by teenage years. Babies born prematurely may be treated with glucocorticoids for a number of reasons. Betamethasone is often given to mothers in preterm labor to accelerate the baby’s lung maturation, and either hydrocortisone or dexamethasone may be given to premature newborns after birth to help with maintaining a normal blood pressure or to shorten the period of time they need help with breathing using a breathing tube. Research in animals has suggested that exposure to glucocorticoids can impair the development of the cerebellum, said Tam. To determine if these effects also occur in humans, a study of 172 premature babies was conducted at two centers — the UCSF Benioff Children’s Hospital and the BC Children’s Hospital and Child and Family Research Institute at the University of British Columbia in Vancouver, Canada. Eighty-five percent of the babies had been given betamethasone before birth, and 20 percent of the babies had received either hydrocortisone or dexamethasone after birth. The study focused on babies born between 2006 and 2009 who had undergone magnetic resonance imaging (MRI) of their brains. One group was part of a longitudinal UCSF study started in 1998 by A James Barkovich, MD, Chief of Neuroradiology and Special Procedures at UCSF. Another was part of a study initiated by Steven Miller, MD, Senior Clinician Scientist at the Child and Family Research Institute. Using advanced analysis techniques from the MRI studies, Tam’s team measured the volume of the brains, and specifically the cerebellum. While there were no negative associations with betamethasone given to mothers in premature labor, babies given either hydrocortisone or dexamethasone after birth had 10 percent smaller cerebellar volumes by the time they’d reached full term. “Unfortunately, we don’t have good alternative treatments at this time. Low blood pressure and breathing difficulties are big problems for premature babies, with serious long-term consequences of their own for the baby’s development,” said Tam. “With this new information, when weighing the risks and benefits of giving glucocorticoids to premature babies, doctors should keep in mind the potential negative effects on brain development, and when possible, consider other treatment options first.” Findings of the study, “Preterm Cerebellar Growth Impairment After Postnatal Exposure to Glucocorticoids,” appear online in Science Translational Medicine. The study was co-authored by Donna Ferriero, MD, A. James Barkovich, MD and David Glidden, PhD all of UCSF, Vann Chau, MD, Kenneth Poskitt,MD, Ruth Grunau, PhD and Steven Miller, MD all of the University of British Columbia, Colin Studholme, PhD of the University of Washington and Eric Fok, MS, of the Tufts University. The research was funded by the Cerebral Palsy International Research Foundation, the National Institutes of Health (NIH) and the Canadian Institutes for Health Research (CIHR).