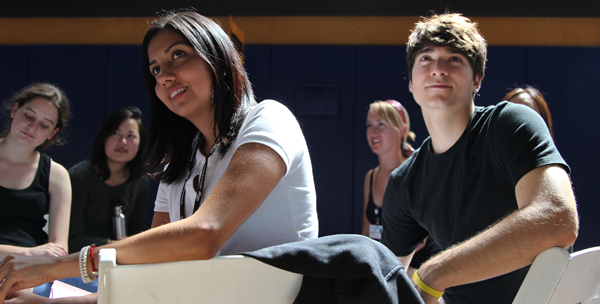 The 475 future doctors, dentists, pharmacists, nurses and physical therapists in UCSF’s Millberry Union gym had just met but they already had a lot to talk about. They discussed what they’d order for their last meal, when and where they’d go if time travel were an option, and what they’d ask an omnipotent being if they had only one question to pose.

These “ice breakers” helped kick off Interprofessional Health Education Day, a mandatory event for all first-year students in UCSF’s health professions. It was designed to implant the notion of teamwork, a concept that is widely endorsed but often elusive. By introducing students early on, they can get acquainted with each other and their chosen fields in a relaxed way that will ease interactions in clinical settings later on.

“This is a really exciting opportunity for all of you to get to know each other a little better, and to work together and to model what we hope here at UCSF is a new way of providing high-quality health care to patients that so deserve it,” said Joseph Castro, PhD, vice chancellor for student academic affairs and a faculty member in the Department of Family and Community Medicine.

He also told the crowd that UCSF has established the Center for Innovation in Interprofessional Health Education and that the “world renowned” Scott Reeves, PhD, a sociologist who specializes in health education research from the University of Toronto, would be arriving in November to lead it.

“The idea is to learn now what other people do instead of when you’re on the job,” said Jessica Manley, a third-year physical therapy student and member of the development team that organized the event. “It’s so you’re on the same page as everyone else and can focus on patient care rather than turf wars. You learn where your expertise begins and where it ends. It all becomes less nebulous.”

Before taking the stage to welcome the students, Joshua Biddle, president of the Associated Students of UCSF (ASUC), observed that each school is fairly insular and that it’s easy to fall into a pattern of socializing almost exclusively with one’s classmates.

“Getting excited from the ground up is what we want to promote,” he said. “There is more energy this year. And it’s pretty cool that UCSF is making this a cornerstone of our education now.”

Interprofessional education, now in its sixth year at UCSF, is more far-reaching and ambitious at the university than ever before. The students on the development team, with the help of mentors and faculty advisers, put together a yearlong curriculum as well as assessment tools. All participants will receive academic credit. The 60 teams that met for the first time in late September will convene again in January, in small groups all over campus.

“The goal is to try to find ways to learn the curriculum together,” said Renee Courey, PhD, a mentor who is coordinator of UCSF’s Pathways to Discovery, an interprofessional training program.

Most significantly, each team will work together on a longitudinal project with a community partner or campus organization to create products such as pamphlets for patients, educational videos or outreach materials for underrepresented populations. Their work will be showcased in April.

“It’s incredibly important that we do this right,” said Kathleen Dracup, RN, DNSc, FNP, FAAN, former dean of the UCSF School of Nursing, who delivered the keynote address.

She said the well-publicized death of a woman in an East Bay hospital the week before — which hospital officials said was likely the result of a medical error — “reminds us of the terrible burden we have in our responsibility toward our patients.”

Dracup said studies have found that communication failures are the leading cause of inadvertent patient harm. Nonetheless, she added, it isn’t easy for health care professionals to talk to each other. 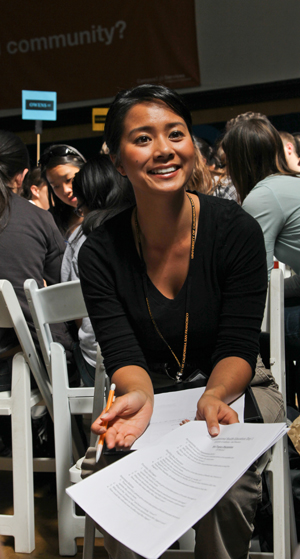 First-year pharmacy student Sang (Judie) Tran participates in a break-out group that focused on how to discuss health coverage with patients during an era of provider shortages.

“Our history is rooted in military traditions that emphasize chain of command, hierarchical organization structure and blind obedience,” said Dracup, who cited terms such as “chief of staff” and “chief nursing officer” and recalled how nurses used to wear caps with one stripe to show graduation and two stripes to signify a promotion.

“Hospitals are really difficult places to work,” said Dracup, describing them as traditional and bureaucratic institutions. She said it was time to shed stereotypes and role definitions and make sure that collaboration is the norm rather than the exception.

“Each profession tells different stories about patient care,” she said. “For example, nurses often tell stories that emphasize loss and suffering. Physicians tell stories of restitution and recovery. Pharmacists tell stories of the miracles wrought by a single drug. But all of these stories have patients and their families at their heart, and we must share our mutual perspectives and our stories if we are to become a highly functioning team.”

Sharing was the guiding principle of the day. The students talked about recent changes in health policy, for which they prepared by reading fact sheets on insurance reform, provider shortages, accountable care organizations and Healthy San Francisco. They also analyzed a case study that played out in five skits during the three-hour session, in which a standardized patient named “Irene Eagan” arrived in the city from Fresno, having lost her job, her home and her husband.

Eagan, supposedly staying with a relative in the city while she looked for work, had an abscessed tooth, back pain and diabetes. She smoked, loved McDonald’s french fries, drank lots of soda and never exercised. All these problems and bad habits created a scenario in which UCSF became her “medical home,” and she saw in succession a dentist, doctor, pharmacist, nurse and physical therapist, played by the deans of the four professional schools and the chair of the department of physical therapy and rehabilitation science.

The overwhelmed widow told the pharmacist, played by School of Pharmacy Dean Mary Anne Koda-Kimble, PharmD, that it was hard to remember to take her pills. The “pharmacist” sympathized and said, “I have twins because of that. ” The audience roared.

During the afternoon, students were asked to stand as a way to answer “yes” to several questions. So, it was to easy to see at a glance that many were not born in California, spoke more than one language fluently, came from families with more than four children, exercised regularly and were the first in their families to be educated as health professionals.

When they weren’t standing or paying attention to skits and speakers, the students huddled together in their teams, just as the organizers had hoped.

Asya Ofshteyn, a second-year medical student and one of the five people on the development team who created and choreographed the event, stood off to the side and marveled.

“I can’t believe they’re actually talking,” she said incredulously. “This is the biggest, most awesome and incredible thing I’ve ever done. I am so happy.”

The students were clearly engaged and engaging, and the buzz in the gym was deafening. “Last year I was sitting here,” Ofshteyn said. “It was a good foundation for us.”

Breanne Cisneros, a student in the School of Nursing master’s program, was one of the people who planned the 2010 event. “This breaks down the walls so that we can communicate in a clinical setting when it really matters,” she said.

After Interprofessional Health Education Day wrapped up, and students continued to chat over pizza, cookies, brownies and beverages, future pharmacist Pin Xiang said the event was invaluable for him. “I had only been meeting other pharmacy students,” said the UC Berkeley graduate. “I especially like this being a yearlong thing.”

Amber Fitzsimmons, a licensed physical therapist, had been on the same development team as Cisneros and became so passionate about interprofessional education that it’s now the focus of her doctoral thesis. She said there is a new sense of urgency because of soaring health care costs and budget cuts for education, and added that UCSF, with its unusual combination of programs in basic sciences and the health professions, can take a leadership role.

“There was no emphasis on this when I went to school,” Fitzsimmons said. “But the history of the medical profession is wrought with silos and turf wars. So it’s important to start the conversation with, ‘What do you do?’ Physical therapists don’t just do range of motion. And pharmacists don’t just stand in Walgreen’s and hand out pills.”