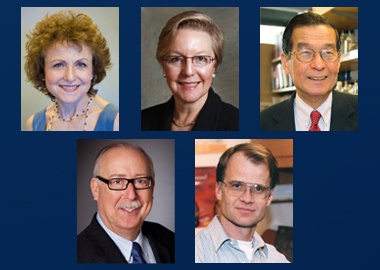 UCSF School of Nursing Dean David Vlahov and four other UCSF faculty members have been elected to the Institute of Medicine (IOM), one of the highest honors in the fields of health and medicine.

The election brings to 89 the number of UCSF faculty who are members of the IOM, an independent, nonprofit organization that works to provide unbiased and authoritative advice to improve health. It was established in 1970 as the health branch of the National Academy of Sciences.

Altogether, the IOM elected 65 new members and five foreign associates. Election to the IOM is a recognition of outstanding professional achievement and commitment to service.

“It is a great pleasure to welcome these distinguished and accomplished individuals to the Institute of Medicine," said IOM President Harvey V. Fineberg. "Each of them stands out as a professional whose research, knowledge, and skills have significantly advanced health and medicine, and their achievements are an inspiration. The Institute of Medicine is greatly enriched by the addition of our newly elected colleagues."

New members are chosen by current active members through a highly selective process that recognizes people who have made major contributions to the advancement of the medical sciences, health care, and public health. At least a quarter of the membership is selected from outside the health professions from such fields as the natural, social, and behavioral sciences; law; engineering; and the humanities.

The IOM total active membership is now 1,688 and the number of foreign associates is 102. An additional 80 members hold emeritus status.

With their election, members make a commitment to volunteer their services on IOM committees, boards, and other activities.