UCSF Medical Center at Mission Bay will celebrate a major milestone on Monday, Oct. 17, with the placement of a 1,600-pound beam atop the sprawling hospital complex to signify the end of the structural steel phase.

The Topping Out Celebration – a tradition in building construction – will provide a special occasion to thank the hundreds of construction crew members, ironworkers and supervisors who have helped erect the skeleton of the 878,000-gross-square-foot building.  The gathering will be hosted by UCSF Chancellor Susan Desmond-Hellmann, MD, MPH, UCSF Medical Center CEO Mark Laret and Sam Hawgood, MBBS, dean of the UCSF School of Medicine and vice chancellor for medical affairs.

The beam, which measures about two feet across and 29 feet long, will be painted white and decorated with art from the three specialty hospitals that will be housed at the medical center complex when it opens in 2015. It will be placed approximately 98 feet above ground.

“The Topping Out will be a breathtaking moment for so many who have worked tirelessly to make the children’s, women’s and cancer hospitals come to life,” said Cindy Lima, executive director of the $1.5 billion medical center project. “It is as if all the hopes, planning, hard work, and contributions of an entire community have been formed into the rising steel itself.”

A live webcast of the event will be aired here so that members of the UCSF community and the general public can take part in the festivities.

The event comes almost one year after more than 200 people gathered at the medical center site at Mission Bay on Oct. 26, 2010, for the official groundbreaking ceremony. That followed nearly a decade of work by UCSF staff, faculty, donors and community advisory groups who shared an ambitious goal to bring San Francisco its first completely new hospital in several decades. 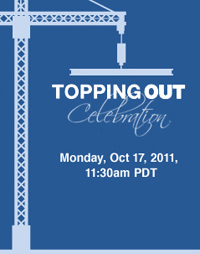 Jack Poindexter of general contractor DPR Construction, Inc. joined the job in March 2009 as senior project manager for the hospital complex. He describes the transition from the virtual design phase to the physical structure looming over 16th and 3rd streets as “incredible.”

“During the initial design, it was really just a picture of a building,” he said. “It’s incredibly rewarding to see the physicalness, to have something to show for what we do.”

Soon after the Topping Out, workers will begin installing the precast concrete and glass that will form what Poindexter called the “exterior skin” of the building.

Though the 289-bed medical center is still several years from completion, workers laying out the steel beams have already glimpsed what future occupants will see from the large windows featured in every patient room.

“Every room will have its own view of the city. It’s pretty spectacular,” Poindexter said.

From her vantage point on the ground, Lima has her own perspective on the emerging facility.

“I know passersby might look up and see a web of metal,” she said.  “But when I look up, I see the caring that will happen inside.”

The Oct. 17 Topping Out Celebration will begin at 10:30 a.m. with a welcome reception, followed at 11:30 a.m. by the topping out and a luncheon. An informational video about the medical center will air at 11:15 a.m., followed by a live webcast of the event.

UCSF Medical Center at Mission Bay will mark another major milestone with the Topping Out ceremomy on October 17. The ceremony will be streamed live on the web.