UCSF Benioff Children’s Hospital at Mission Bay will incorporate the latest innovations in information technology when it opens.

When Michael Blum, MD, imagines the new UCSF Medical Center being constructed at Mission Bay, he thinks of a beloved TV show.

“The new hospital gives us the opportunity to really integrate new media, social media, the work flows of care providers and the experiences of the patients and their families,” he said. “It’s a platform where we can start with a blank sheet of paper.” 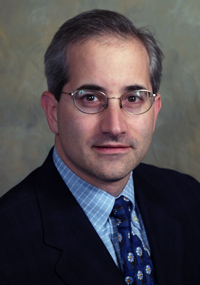 That sheet began filling up about five years ago, when UCSF set out to refresh some of the existing hotel-style amenities in its facilities, a process guided by the suggestions of patients and care providers, Blum said.

“Everyone gave input into what these spaces need to look like,” he said.

The resulting plan for the new medical center, which features separate specialty hospitals serving women, children and cancer patients, is highly ambitious from a technology standpoint. Features will include a large display screen — perhaps covering an entire wall — in every room that offers an array of entertainment and communication options as well as education tools tailored to each patient.

“Patients these days are all about social media; they spend huge amounts of time online both communicating with peers and looking for information,” Blum said. “We’re really going to look at that very aggressively, so that the experience of patients and their families in the hospital will center around social media.”

In addition, Blum and his colleagues are working to launch a pilot project within the next year using Chatter, an internal social network for businesses created by Salesforce.com, whose CEO, Mark Benioff, and his wife, Lynne, are major supporters of UCSF. The couple donated $100 million to help build the new UCSF Benioff Children’s Hospital and the current children’s hospital also bears the Benioff name.

“Every member of the care team would be able to see what everyone else is saying about a patient,” Blum said of Chatter, adding that the tool would be integrated with UCSF’s existing electronic health record system. To ensure patient privacy, it would not be accessible to anyone outside the patient’s care team.

With the medical center at Mission Bay still several years from completion, UCSF already has begun implementing leading-edge technology. In the spring, for example, the University launched its new patient portal, UCSF MyChart, which allows patients to access their electronic medical records and communicate with doctors and clinic staff from home.

That commitment to innovation stood out to Hayden Pheif and his family during the 11-year-old’s four-month stay in the Pediatric Intensive Care Unit at the children’s hospital earlier this year. 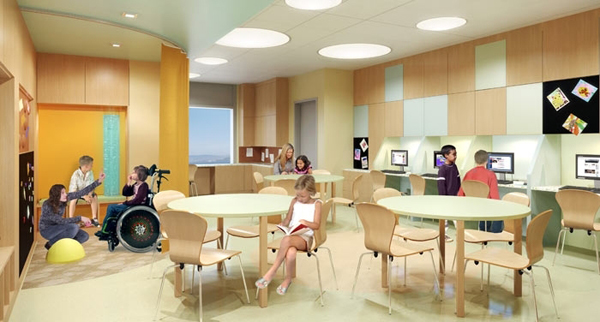 UCSF Benioff Children’s Hospital will feature a classroom on-site so that our patients can continue their education while we care for their health. The school room, a fully-accredited part of the San Francisco Unified School District, will provide K-12 education for patients for the duration of their stay. The school room will combine personal care with education, following the example set by UCSF’s first Marie Wattis School, established in 1991. UCSF Benioff Children's Hospital's Marie Wattis School at Mission Bay will be operated by Child Life, an organization committed to empowering children and families to master challenging life events.

Hayden suffers from fibrodysplasia ossificans progressive, or FOP, an extremely rare condition in which soft tissue such as muscle and tendons turn into bone. The disorder can immobilize patients and even shorten their lives. There is no cure.

As a team of UCSF specialists helped Hayden regain strength and transition off of a full-time ventilator,the Mill Valley boy was able to participate in his 5th grade graduation from his hospital bed, using Apple’s video calling application FaceTime. He also logged many hours playing interactive games on a Nintendo Wii in the hospital’s All Stars Technology Room and keeping up with his beloved San Francisco Giants on TV, said his mother, Megan Pheif.

“When you’re sick and have limited ability to get around, it’s nice to be able to connect to your friends,” Megan Pheif said of the hospital’s social media access. “That was a big part of helping Hayden get better.”

Pheif said the family was excited to hear about some of the high-tech features planned for the new medical center. Hayden offered his own suggestions, such as on-demand movies that patients could order without leaving their room. On-demand movies, games and education content will indeed be available in each patient room, Blum confirmed.

Input from patients like Hayden has been an invaluable part of the medical center planning and design process, said Seth Bokser, MD, medical director of IT at the UCSF Benioff Children’s Hospital and chair of the university’s IT steering committee.

“Moving forward, I think that patients and their families are going to push clinicians to innovate,” Bokser said.

By 2015, when UCSF Medical Center at Mission Bay is scheduled to open, Bokser also hopes to offer hospital staff what he called a first-of-its-kind fully integrated communication platform.

“Until now, we haven’t looked at clinicians who are weighed down by communication devices,” he said.  “What we’ll be creating is one platform, one conduit, through which all the disparate communication can flow: video chat, phone, email, text, medication ordering and retrieval of electronic medical records.”

That would represent a remarkable accomplishment, Blum said, noting that most hospitals collect mountains of data about each patient but then let much of it “just sit on a screen somewhere.”

“If we can connect all the different devices, it would save a tremendous amount of effort, increase data security and decrease the information lag, saving time,” he said.

This future platform, Bosker said, would also help address a common Information-Age complaint, within hospitals and in the outside world alike: “There’s often this sense of, ‘I have all this technology, but somehow I don’t feel more productive.’”