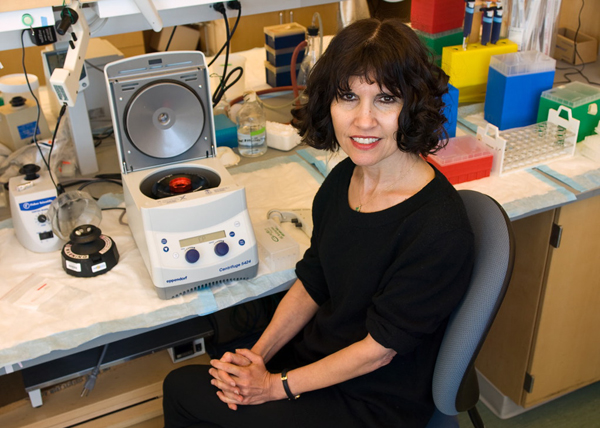 Every year, the pharmaceutical industry invests billions of dollars in testing drugs that are eventually abandoned because they don’t work or cause side effects.

What if scientists could make better use of technology to predict which drugs will work and pinpoint the patients they’re most likely to help? UCSF scientists are doing just that as they pioneer a new field — quantitative pharmacology — aimed at improving the efficiency of the drug development process.

UCSF's new Center for Quantitative Pharmacology held its first symposium on Sept. 22 and 23, bringing together scientists from academia and industry. A joint department of the schools of pharmacy and medicine, the center brings together faculty for cross-disciplinary research as well as developing courses in this emergent discipline. The new center represents the latest step in UCSF’s significant and ongoing contributions to drug discovery.

Kathy Giacomini, PhD, co-chair of the new center and the symposium, answered questions about the burgeoning field of quantitative pharmacology in a recent interview. Giacomini is a professor of Bioengineering and Therapeutic Science in the UCSF School of Pharmacy.

Q: The pharmaceutical and biotech industry is facing huge challenges. Last year, the US Food and Drug Administration (FDA) approved 21 new drugs, down from 25 in 2009 and 24 in 2008. A Pfizer Inc. executive at your symposium noted the cost of developing a new drug has reached $1.8 billion when the expense of all the drugs that fail to make it to market is included. Is the industry in crisis?

A: Yes, I think the industry has been in crisis for a period of time. They’re also responding to that crisis by changing the way they develop drugs, forming new partnerships with academia. Our partnership with Pfizer may represent a new model for drug discovery and development.

(Note: Pfizer, the world’s largest drug company, announced last year that it would provide up to $85 million in funding and milestone payments over the next five years to support research at UCSF that may lead to development of new drugs.)

Q: Why do so many drugs fail to make it through the testing process and get abandoned or rejected?

A: The newest data suggest that they largely fail due to a lack of efficacy. They enter phase 2 and phase 3 clinical trials and the drug people thought would work doesn’t work. There’s also a failure rate of 15 to 20 percent because of safety issues. So you have to ask the question: Why didn’t it work? And why couldn’t they predict that it wasn’t going to work? One reason is they don’t know enough about the drug in humans. They don’t have enough information on the drug’s action and its effect on human biology. The second is there’s a need for integrative models that will help predict these things. That’s where quantitative pharmacology comes in.

Q: So if the drug industry could predict this lack of efficacy or these safety problems earlier in the drug-testing process they could save a lot of money and improve their efficiency?

Q: So what is quantitative pharmacology and how can it help address this problem?

A: Quantitative pharmacology is providing computer-based models of how to predict pharmacokinetics (the effect of a drug on the body), drug toxicity and efficacy and then to predict outcomes in large populations. We need quantitative methods to integrate all these data. But a model is only as good as the data that goes into it so we need to know more about the pharmacology and biology of the drug as well.

Q: How could this actually work in practice?

A: You develop models that can predict what drugs will interact with which receptors. If you look at a lot of them, you can predict how new drugs may interact with receptors you hadn’t previously thought of. You model the target, the drugs and the interactions. Then you bring that together in biological systems and look also at changes that happen downstream as a result of that interaction. A drug doesn’t just interact with one receptor, it’s interacting with multiple receptors. And sometimes the interaction with a receptor that wasn’t the intended target may actually be stronger than the effect on the putative target.

Then you get into the clinic and start asking about genetic information. You’ve said this drug is going to interact with these receptors and we think it will do something like lower blood pressure. But now we have to say wait a minute, if we give it to John, he had his blood pressure lowered but Jill didn’t. So there is variation in response. Now you need to know something about genetic polymorphisms (gene variants) that each individual may carry.

Q: Is genomic sequencing also part of the picture?

A: Identifying gene variants that individuals may carry — polymorphisms — that affect how they metabolize drugs is critical. Are you a slow metabolizer? A fast metabolizer? Now you know to give one person a lower dose and another a higher dose and don’t give this person a particular drug at all. Today a handful of pharmacogenetic tests are being used in therapy but this will grow hugely. Most pharmaceutical companies are now collecting DNA throughout their clinical trials. They’re doing it because they would like to identify people who may have toxic reactions. Then they can say to the FDA we know our drug produces toxicity but only in this group so we just won’t give our drug to them. They’re also interested in efficacy — identifying the people who don’t respond so they know who not to give the drug to.

Q: Are you confident these technologies can really help reduce the exploding costs of drug development?

A: We’ve seen really beautiful data on this. If you know the population of people that are going to respond to a drug, instead of giving it in clinical trials to 1000 people of which 750 aren’t responding, you just bring in the 250 people who will. Your clinical trials costs go way down if you can predict the responders. Same with predicting the guys who are going to get toxic.

Q: At the symposium, Richard LaLonde, a Pfizer vice president, talked about how in the course of developing a new lung cancer drug, a paper came out from a group of academic researchers showing that the cancers of some patients were driven by a particular genetic mutation. Pfizer used that data and tested their drug, crizotinib, only on the 1 percent to 7 percent of patients with that gene mutation. The drug won FDA approval in August. Is this an example of the future of drug development?

A: That finding allowed them to shorten their clinical trial, reduce the number of people they needed to recruit and exclude people who weren’t going to respond. It was a good example of a public-private partnership. It’s a perfect example.

Q: One result is that instead of having a potential market of everyone with this type of lung cancer they’ve narrowed the market only to those with this particular mutation. Is the industry ready to accept smaller markets?

A: If you’d have asked me that question 10 years ago, my answer might have been they’re not yet ready. I think they’re very ready now and they’re avidly going down that pathway. They’ve watched too many failures.

Q: So the new direction is smaller market drugs, but lowered costs to get there?

A: Right, lower costs and greater predictability that drugs are going to work. The industry’s big problem is risk. They walk into a clinical trial not knowing whether their drug is going to work or not. If they could reduce that risk, I think that would make it a healthier industry.