Brain tumor specimens taken from neurosurgery cases at the University of California, San Francisco (UCSF) Medical Center has given scientists a new window on the transformation that occurs as healthy brain cells begin to form tumors.

The work may help identify new drugs to target oligodendroglioma, a common type of brain tumor, at its earliest stage, when it is generally most treatable. Any potential drugs identified will have to prove safe and effective in clinical trials, a process that can take several years. 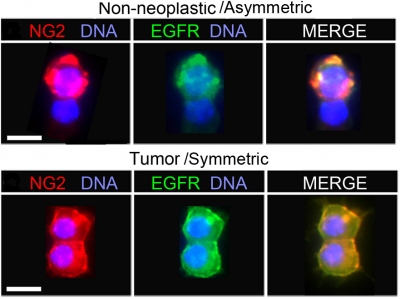 As described in the journal Cancer Cell this month, the UCSF team found that the pool of cells from which oligodendroglioma tumors emerge normally divide “asymmetrically” by splitting into two unequal parts – like giving birth to fraternal twins who look different and have distinct fates. When these normal cells transform into cancer cells, they switch gears and begin dividing symmetrically, essentially giving birth to identical twins instead.

“This happens early – before the tumor forms, and it may provide a point to intervene in the process of tumor initiation,” said Claudia Petritsch, PhD, an assistant professor with the UCSF Brain Tumor Research Center who led the research.

The Brain Tumor Research Center is part of the UCSF Department of Neurological Surgery, which is consistently ranked by U.S. News & World Report as one of the top departments in the world. Its doctors perform more than 1,100 neurosurgeries a year to remove brain tumors, and in the last 30 years, this work has helped to build one of the most extensive brain tumor repositories in the United States, with tissue samples collected from more than 7,800 cases of cancer.

In their research, Petritsch and her colleagues used genetically engineered mice to identify that a protein called NG2 controls this switch, and they are working on ways to target genes that regulate the process as a way of fighting oligodendroglioma and perhaps other brain tumors.

Why Divisions Matter to Cancer

Oligodendrogliomas are unusual among brain tumors because they often respond to chemotherapy drugs. However, the tumor frequently returns in a form that is resistant to chemotherapy and requires repeated surgical removal.

Petritsch and her colleagues first discovered last year that oligodendroglioma tumors derive from a type of progenitor cell called “oligodendrocyte progenitors” that proliferate in the brain throughout life. These progenitors may also play an important role when the brain is injured by multiplying rapidly and helping heal wounds.

The new studies in mice suggest that lacking an injury, these progenitors divide mostly asymmetrically, maintaining an equilibrium of these cells within the brain. Progenitors can also switch gears and divide symmetrically instead. Scientists believe that allows the brain to provide an expanded pool of cells when needed.

Using mouse models of the tumors as well as tissue samples taken from people with the disease, Petritsch and her colleagues showed that before the tumors arise, the cells preemptively make this switch, transforming from dividing asymmetrically to dividing symmetrically.

They used bioinformatics to discover that dozens of regulators of asymmetric cell division including NG2 are dysregulated in oligodendrogliomas. The Petritsch lab calls these “asymmetry proteins” and argues that if mutated they probably cause the switch to abnormal cell divisions and thereby initiate the genesis of tumors. Modulating NG2 and dysregulated asymmetry proteins pharmacologically may restore normal division modes and provide a new way to fight the cancer with drugs.