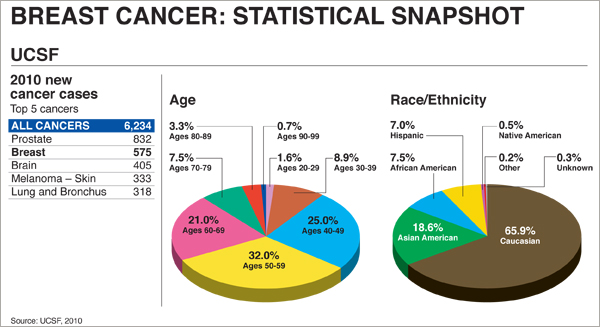 It’s a woman’s most feared disease. Breast cancer is the most common cancer among women in the United States aside from non-melanoma skin cancer, and the leading cause of death of women between the ages of 40 and 55. One in eight women will be diagnosed with the disease in their lifetime.

Breast Cancer Awareness Month is an opportune time to take stock of some of the recent progress being made at the University of California, San Francisco (UCSF), home to one of the preeminent cancer centers in the nation.

Still, the disease’s toll has been declining, partly the result of a better understanding of cancer genetics – for which UCSF won a Nobel Prize in 1989 [link to Bishop/Varmus prize] – that led to more targeted drugs and treatments. In a new study, the American Association for Cancer Research reports that breast cancer deaths in the United States have dropped about 28 percent from 1990 to 2006.

The focus at UCSF is on screening for early cancer detection, more effective and less toxic therapies, education and research that explores the causes, biology and behavior of the disease.

Controversy erupted recently about a federal task force recommendation that women ages 40 to 49 should not automatically be scheduled for screening mammography. George Sawaya, MD, a UCSF professor of Obstetrics, Gynecology and Reproductive Sciences, and Epidemiology and Biostatistics, was a member of that task force and discusses the rationale in this video. Watch video.

One of UCSF’s research projects is an effort to determine why African American women are more likely to die of breast cancer than any other ethnicity and how to prolong their lives. By targeting an immune cell, the researchers have devised a completely new way of treating cancer. Read story.

In October, a revolutionary new way of studying and treating the disease will be launched at UCSF. Called the Athena Breast Health Network, the project is a collaboration with the five University of California medical campuses to track some 150,000 women throughout California over the course of decades. At UCSF, women will be screened for the disease and provided with individual risk assessments. Read story.

In work involving more than 170,000 women, renowned breast cancer researcher Karla Kerlikowske, MD, will publish a new scientific paper in October that assesses the probability of false positive mammograms and biopsy recommendations. Another new paper by Kerlikowske to be published in October compares the effectiveness of digital versus film mammography. Read story.

Another UCSF breast cancer research project has been evaluating the cost and effectiveness of a single dose of radiation during surgery for early stage breast cancer instead of multiple exposures. The researchers have found so far that it is just as effective as standard, six-week radiation and could save $1.5 billion over five years. Read story.