Some of the biggest names in the field of global health came to UCSF recently to figure out how to work together to improve the education of health professionals in the United States and around the world. 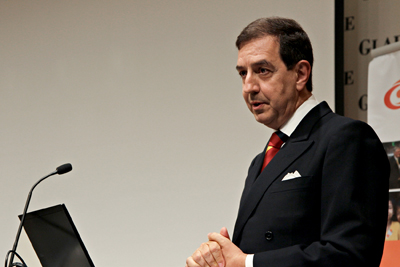 “The ‘worldwide’ is very important, I know, to this group,” said Desmond-Hellmann. “And it is to me and my leadership team.”

Then she introduced the new executive director of UCSF Global Health Sciences, Jaime Sepúlveda, MD, MPH, DrSc. He had been senior fellow in the Global Health Program at the Bill & Melinda Gates Foundation in Seattle before starting at UCSF on Sept. 1.

Sepúlveda told the audience of 140 people that he’d learned several important lessons in life in the past 10 days: If you’re relocating and over 50 — no, 55 — don’t drive a U-Haul truck from Seattle and don’t choose the coastal route. Take more than 24 hours of vacation between jobs. And don’t organize an international conference right off.

After the laughter subsided, Sepúlveda said he wanted to continue to build on the work that began in 2007, when he chaired a symposium at UCSF that brought together leaders in global health to discuss sustainability and the workforce.

Those discussions led to two key developments: the creation of the Consortium of Universities for Global Health (CUGH) and the Commission on the Education of Health Professionals for the 21st Century, which produced a report published in The Lancet last November. The morning session of the all-day conference assessed what has transpired in the past four years with both the commission and the consortium.

Sepúlveda said he’d be remiss if he didn’t acknowledge the timing of the symposium, two days before Sept. 11. “I can’t help but believe that the work being done by the people in this room will continue to be an important part of the solution,” he said. “Partnering with developing countries to improve health and reduce inequities is strategically important to keeping the world safe.”

As part of his long-term vision, Sepúlveda said he hoped the Bay Area would be recognized as a leader in global health in the same way that UCSF and San Francisco have been renowned for 30 years for the model they have used to combat AIDS.

Sepúlveda described the consortium and commission as very successful initiatives, which have been following parallel paths. He said it was time to integrate them. Then he introduced his “mentor, friend and source of inspiration for everyone working in global health:” Harvey Fineberg, president of the Institute of Medicine.

“You made the point, Sue, that global health is important to the vision of UCSF going forward,” Fineberg said, addressing the chancellor. “I think it’s fair to say that UCSF is also very critical for the success of global health academically and practically in the world.”

He said it was important for leading centers of health educators to understand and embrace global health, and added that global health, domestic health, distant health and local health are all part of the same fabric.

Fineberg asked: “Has there ever been an ideal health education system? Have you ever wondered why every generation of students entering schools of medicine or nursing or public health or dentistry or veterinary medicine complains? Why are they so restless about fixing things? And then how is it possible that when they become faculty, they become so set in their old ways that the new students have to undertake the same process over and over?”

The role of students was a recurring theme throughout the conference, in terms of what their energy and drive could do to vastly improve global health.

Lincoln Chen, president of China Medical Board, told the audience that the Mission Bay conference was a “landmark event.” He was co-chair of the commission that produced last November’s report, which proposed both institutional and instructional reforms, and was timed to the 100th anniversary of the Flexner Report, a seminal study of medical education in the United States and Canada. 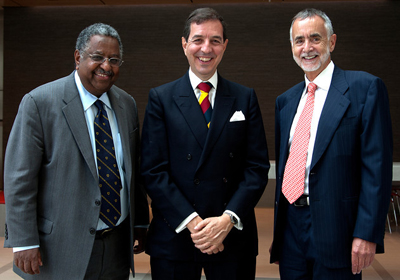 Over the last 100 years, Chen said, life expectancy has doubled, partly because of what he called the brighter aspects of the medical profession, with professionals serving as knowledge brokers, service providers, technology discoverers, managers of quality assurance and team leaders. But he also mentioned the darker side: monopolizing rather than sharing knowledge, financial self-interest, professional chauvinism, overspecialization and a bias toward urban rather than rural populations.

Julio Frenk, co-chair of the commission report and dean of the faculty at the Harvard School of Public Health, spoke of the “gross underfunding” of the education of health professionals around the world, which amounts to only about 2 percent of global expenditures on health.

He said the report and its 10 recommendations have received very vigorous follow-up around the world, and added that one of the most important is having a competency-based curriculum.

“We are truly an interconnected world and the key feature of our reality is interdependence,” Frenk said.

He added that it’s crucial, however, to adapt competencies to be locally responsive. It’s not the same thing to be a doctor or nurse in the Bay Area, he said, which probably has the “highest concentration of health professionals per square meter in the entire universe,” as to be a health professional in a place where there’s one for every 40,000 inhabitants.

Frenk also spoke of the importance of teamwork. “We expect magically that people trained in silos will work in a team,” he said, before pointing out that most health workers are not professionals and that one of the report’s key findings is how to build a bridge between the two groups.

David Vlahov, PhD, RN, dean and professor at the UCSF School of Nursing, said he believes an anti-urban bias has developed, which contends that there are too many overspecialized providers in urban areas. But he said it’s necessary to look at population trends: In 2007, half the world became urban, and by 2020 half the population in low-income countries will be urban.

“Urban — that’s where people are,” Vlahov said. And that’s where more attention needs to be focused as far as health care needs, he said.

Cooke, professor of medicine at UCSF, said, “The common term ‘education for lifelong learning,’ at the risk of slight overstatement for rhetorical purposes, is more or less an empty phrase in U.S. medical education.”

She said that although all schools talk about this idea, it’s impossible to connect it with their curricula. And interprofessional education, she added, is not much better.

Cooke was one of three authors of a text titled “Educating Physicians: A Call for Reform of Medical School and Residency,” published in June 2010. “I read pretty much everything that’s been written at the empirical level about medical education in the course of preparing to write this book,” she said. “And it was possible to do, working part time on the book, in four years. So that tells you there’s not enough basis” for knowing what works and what doesn’t.

Yamada, executive vice president of Takeda Pharmaceuticals and former president of the Gates Foundation’s Global Health Program, asked, “How do we make sure the report has impact and is more than an academic exercise?”

He said institutions don’t need to create courses on global health but to incorporate global thinking into whatever is being taught. The report will die the death of most academic publications if there isn’t a game plan for implementation, Yamada said.

“Given what we’ve just heard, that global health needs to be part of ophthalmology and pediatrics, why should we have a school of public health?” Desmond-Hellmann asked. “Why isn’t public health or global health embedded into the curriculum of professional education?”

Frenk said the problem with global health is that it often means foreign health in the U.S. context.

In the second morning session, devoted to the consortium, Haile Debas, MD, chancellor and dean emeritus at UCSF and chair of the CUGH board of directors, said that the subject of global health has experienced a big surge of interest and growth in recent years, especially in North American academic programs. But he said federal and foundation support for such programs has decreased.

Debas, the founding executive director of UCSF Global Health Sciences, said that 240 people attended CUGH’s first annual meeting in 2009 and 868 were there in 2010. More than 1,200 are expected when the organization meets in Montreal in November. That meeting will celebrate CUGH’s merger wtih the Global Health Education Consortium (GHEC).

Thomas Quinn, MD, MSc, professor of medicine and pathology, said public health/global health is the most popular undergraduate major, and growing, at Johns Hopkins University in Baltimore, where he works. And 75 percent of its incoming medical students have worked in a developing country.

“We need an inventory of the course curricula out there,” said Michele Barry, MC, FACP, professor of medicine at Stanford University. “Because why are we all recreating the wheel at our own institutions? We need to be more collaborative and share the wheel — or share the spokes of the wheel.”

King Holmes, MD, PhD, professor of global health, medicine, microbiology and epidemiology at the University of Washington, said the biggest step the consortium can make in the next year is not only to bring in more members from low-income countries, but also to spend more time on how to make the partnerships effective. Currently, 61 North American universities and 14 universities elsewhere in the world belong to the consortium.

He said two examples of projects that work are the Washington Global Health Alliance and the Puente Piedra Project in Peru.

“I’m very grateful that we have the Lancet Commission report as a starting point to goose us forward with all of this,” said commentator Judy Wasserheit, MD, MPH, vice chair and professor of global health and medicine at the University of Washington.

“Watch out for short-termism and watch out for undue emphasis on research outcomes,” Feachem said.