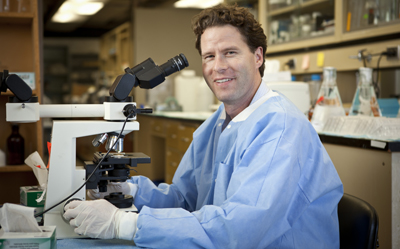 UCSF neurologist William Seeley, MD, a clinician-researcher whose work is advancing understanding of neurodegenerative diseases, has been named a 2011 MacArthur Fellow, one of the highest honors bestowed on an individual in the United States.

Seeley, age 39, and an associate professor of neurology in the UCSF Memory and Aging Center, has made significant headway in studies of  frontotemporal dementia, a family of  neurological syndromes usually afflicting people in midlife, and second only to Alzheimer’s as the primary cause of progressive pre-senile dementia.

A physician who treats patients and conducts clinical research, he integrates microscopy, magnetic resonance imaging and clinical examination to explore the structural, functional and behavioral aspects of neurodegenerative diseases.

In 2006, he identified a population of cells, known as von Economo neurons, that are the primary target of FTD. Further differentiating patients based on behavioral manifestations, he mapped specific changes in cortical connectivity networks that correspond with each clinical subtype of FTD.

The research represents a key step toward identifying the molecular and cellular mechanisms underlying the initiation and spread of frontotemporal dementia and lays the groundwork for developing targeted treatments to halt its progression. Insights into the disease are expected to shed light on other neurodegenerative diseases.

“Bill’s research is novel and groundbreaking,” said Bruce Miller, MD, director of the UCSF Memory and Aging Center. “His imaging studies probe the selective vulnerability of brain circuits with aging and are changing the way that we study neurodegenerative diseases. He exemplifies the concept of genius.”

The MacArthur honor, which includes $500,000 in support over the next five years, to be used at the recipient’s discretion, recognizes individuals for “their creativity, originality, and potential to make important contributions in the future,” said Robert Gallucci, president of the MacArthur Foundation.  It recognizes “how individual creativity and talent can spark new insights and ideas in every imaginable field of human endeavor.”

“I am overwhelmed with pride as a husband and new father” said Seeley, speaking from the maternity suite of the hospital where his wife gave birth to their first child -- a little girl – yesterday, “and of course with gratitude for the recognition of the MacArthur Foundation. The award redoubles my commitment to work with my UCSF colleagues toward the long-term goal of finding treatments for FTD and other forms of neurodegeneration.”

Frontotemporal dementia is a group of related conditions resulting from the progressive degeneration of the temporal and frontal lobes of the brain. These areas of the brain play a significant role in decision-making, behavioral control, emotion and language.

In people under age 60, it is the most common cause of dementia and affects as many people as Alzheimer's disease in the 45-64 age group. Men are affected more commonly than women. There are several forms of the disease that lead to slightly different behavioral, language and/or motor symptoms. There is no treatment or cure yet that can reverse the damage, but medications and lifestyle changes can help relieve the symptoms.

Seeley’s discovery that von Economo neurons die early in FTD has implications beyond the disease, itself. Because the cells arose only recently in evolutionary history – in a common ancestor of great apes and humans – and are particularly abundant in humans, the discovery supports the concept that evolution has rendered the human brain vulnerable to disease, including frontotemporal dementia, and, possibly, disorders such as autism and schizophrenia.

Moreover, because the disease erodes aspects of social behavior and emotions – self awareness, moral reasoning and empathy – that are highly developed in humans, the finding suggests that the cells may play a role in what makes humans “human.”

“Bill’s investigation of the evolutionarily new von Economo neuron, shows us how we are connected to other big-brained social species like elephants and whales,” Miller said.

“Beyond his scientific brilliance,” he said, “Bill retains a remarkable humility and decency and integrates a full life as a neurologist, scientist, pathologist, teacher, colleague, husband and now father. Our community is lucky to have him working among us.”

Stephen Hauser, MD, chair of the Department of Neurology, concurred. “Bill is a wonderful, collaborative colleague, and represents the mission of all of us here to find answers to these terrible neurological diseases while continuing to provide the best patient care for our patients.”

Seeley is the fourth UCSF scientist to be named a MacArthur Fellow, and the first clinical researcher. Victoria Hale, PhD, was named a fellow in 2006, while she was an adjunct associate professor of biopharmaceutical sciences. She founded the Institute for OneWorld Health (iOWH), a nonprofit pharmaceutical company with a mission to develop affordable drugs for neglected diseases that plague the world’s poorest populations.

Joseph DeRisi, PhD, was named a fellow in 2004, for his development of microarray tools for exploring the activity of genes and using them to make major advances in understanding such infectious diseases as SARS (severe acute respiratory syndrome) and malaria.

The late Ira Herskowitz, PhD, a UCSF geneticist, was named a fellow in 1987. His studies on the yeast Saccharomyces cerevisiae yielded major insights into the fundamental aspects of cells, and he was a pioneer in pharmacogenetics – the study of the way natural variations in individuals’ genes affect their response to drugs.

The MacArthur Fellowships come without stipulations or reporting requirements and offer fellows unprecedented freedom and opportunity to reflect, create and explore. The recipients learn with a single call, “out of the blue from the Foundation,” that they have been named as fellows. No one can apply for the awards, and no interviews are conducted.