Mental illnesses — led by anxiety disorders and depression — now affect one-quarter of the US population according to new research. In Europe a similar proportion — about 27 percent — suffers from these same illnesses, a second new study concludes. 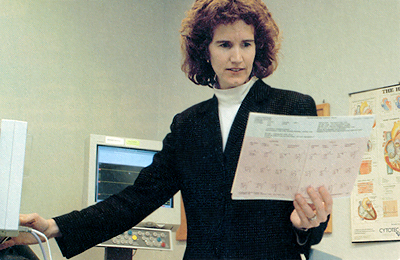 Typically someone with symptoms of heart disease or cancer seeks treatment. But partly due to stigma, mental illness often goes unrecognized and untreated, although the direct impacts — mental anguish and impaired functioning — are significant.

Less well understood are the risks for other illnesses faced by those who suffer from mental illness.

“Mental illness exacerbates morbidity from the multiple chronic diseases with which it is associated, including cardiovascular disease, diabetes, obesity, asthma, epilepsy, and cancer,” according to authors of the US study, led by researchers from the US Centers for Disease Control (CDC) and Prevention and published in the Sept. 2 issue of the Morbidity and Mortality Weekly Report.

Since the late-1990s, UCSF professor Mary Whooley, MD, an internist with the San Francisco Veterans Affairs Medical Center, has been leading research on the impacts of depression on chronic medical conditions — especially heart disease. She has looked for physiological changes as well as behaviors that might be associated with risks for other medical conditions.

Whooley found that that depressed patients were in essence less likely to take care of themselves. They were especially unlikely to keep up with any sort of exercise regimen, a factor that was most associated with cardiac events. While people who are depressed may lack the motivation to exercise, a gradually growing number of research studies suggest that aerobic exercise can relieve depression.

Physiologically, Whooley found that depression was associated with elevated levels of the fight-or-flight hormone norepinephrine, more inflammation, and lower blood levels of omega-3 fatty acids. But when exercise was factored in, these changes did not account for the link between depression and heart disease — only exercise mattered.

Of the new survey findings, Whooley says, “The prevalence of mental illness reported is not striking to me.” But the inadequacy of treatment for conditions including depression and anxiety disorders is disturbing, she says, especially given what now is known about associated medical conditions.

In addition to the aforementioned chronic diseases, according to the CDC researchers, people with mental illness are on average from two to six times more likely die from suicide or homicide or to be involved in motor vehicle accidents and other injuries. They are much more likely to use tobacco and to abuse alcohol.

Depression, Anxiety Most Common, But Treatable

In the US study, researchers found that 6.8 percent of the population now suffers from major or moderate depression. According to the study authors, CDC surveys focus on depression, but lack sufficient data on anxiety disorders. However, anxiety disorders are also common and can result in high levels of psychological distress and impairment.

In an analysis of data from 30 European countries published in the September issue of European Neuropsychopharmacology researchers concluded that 14 percent of the population suffered from anxiety disorders and 6.9 percent suffered from major depression. In Europe the percentage afflicted with mental illness has not budged since 2005. Nor is the rate of treatment improving — less than one-third of cases are treated.

Whooley is on the lookout for patients in her general practice who may have depression or anxiety disorders, but whose reason for a doctor’s visit is a minor complaint. Mental health problems can magnify symptoms from all kinds of medical conditions, she says.

Studies indicate that Prozac and other drugs of the SSRI class perform better on average than placebo in patients with moderate or severe depression. But many patients remain depressed despite treatment and often are prescribed a second type of drug in addition to an SSRI, or referred for psychological therapy, Whooley notes.

The value of SSRIs is less well established for anxiety disorders, Whooley says, but cognitive therapy, which has largely replaced psychoanalytic therapy in clinical practice, is often very effective, she adds.