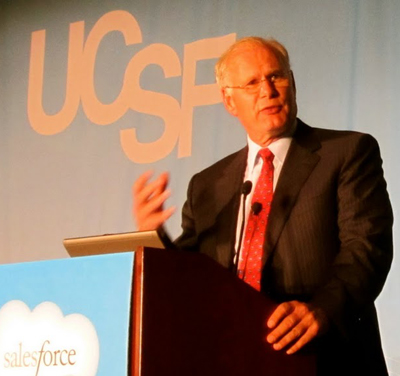 Mark Laret, chief executive officer of UCSF Medical Center and UCSF Benioff Children's Hospital, talks about the future of health care at the UCSF session at Dreamforce on Sept. 1.

It seemed like an unlikely scenario: eight of UCSF’s top thought leaders describing their work for a public health sciences campus and hospital as hundreds of startup founders, sales executives and information technology professionals listened — and Tweeted — intently.

But that’s exactly what took place Sept. 1 at Dreamforce in San Francisco, the annual user conference hosted by computer services provider Salesforce.com, where UCSF scientists and physicians conducted a six-part series of talks on topics such as hospital safety, caring for breast cancer patients and how the environment affects reproductive health. The speakers were part of the “Unusual Thinkers: The UCSF Track” that highlighted UCSF’s role in advancing health through research and patient care.

It quickly became clear that UCSF’s presence at Dreamforce was far from accidental. Whether by using bar codes and robotic machinery to reduce medication errors, or empowering hospital patients and their families through in-room access to online health resources and electronic medical records, technology is a critical part of UCSF’s current and future leadership in health care, the UCSF leaders said.

“Transformational change revolves around information,” said Laura Esserman, MD, MBA, director of the Carol Franc Buck Breast Care Center and professor of surgery and radiology. “Our future depends on our ability to re-engineer our [health care] processes and collaborate.” 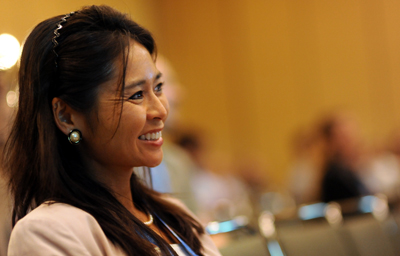 A member of the audience reacts to one of the UCSF presentations at the Dreamforce conference.

UCSF Chancellor Susan Desmond-Hellmann, MD, MPH, described the University’s tenet as “not to stand still” in an ever-changing world — a principle being advanced by the UCSF Medical Center at Mission Bay, scheduled to be completed in early 2015. Desmond-Hellmann also joined Salesforce.com founder Marc Benioff on stage earlier in the day during the conference’s keynote address.

The 289-bed medical center at Mission Bay will feature hospitals serving women, children and cancer patients and will consist of “great buildings, great science and great health care, all happening in an integrated way,” said UCSF Medical Center CEO Mark Laret, who appeared alongside Desmond-Hellmann to kick off the “Unusual Thinkers” sessions with a discussion on “The Future of Health Care.”

That project is close to Benioff’s heart; he and his wife, Lynne, donated $100 million to help build the new UCSF Benioff Children’s Hospital after Lynne Benioff gave birth at the current UCSF children’s hospital, which also now bears the couple’s name.

The result of UCSF’s longstanding commitment to innovation was on display later that evening during a concert at Davies Symphony Hall to benefit the children’s hospital, featuring performances by Jay Leno and Alanis Morissette and honoring the family of 4-year-old UCSF patient Grace Rego. The event was underwritten  by Salesforce and sponsored by several businesses including  Zendesk, a customer support provider that has pledged to donate $1 million to the hospital over the next year.

After Grace Rego was diagnosed with scoliosis, or curvature of the spine, her parents, Jennifer and Chad, sought the help of UCSF pediatric orthopaedic surgeon Mohammad Diab, MD, who suggested a rare surgical intervention known as vertebral body stapling. UCSF Benioff Children’s Hospital is currently the only hospital west of the Mississippi that performs the procedure.

Despite the unknowns, the Regos didn’t take long to decide to put their trust in Diab and UCSF’s reputation for “impressive science, technology and innovation,” Jennifer Rego said. Six weeks later, Grace is thriving and her parents’ memory of the darker days is beginning to fade.

“We look at her now and she’s doing so well, it feels almost strange to be here,” a beaming Jennifer said as the family prepared to accept the second annual UCSF Colin Powell Courage Award. “But it did happen, we did go through it.”

The Regos are just one of many success stories that stem from UCSF’s embrace of groundbreaking medical care and technologies. 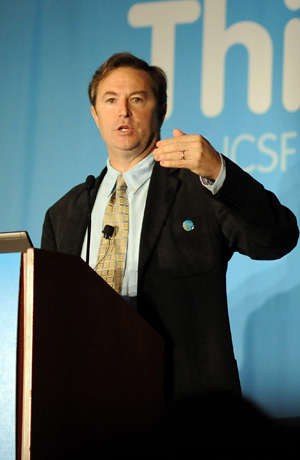 At the Dreamforce event, Josh Adler, MD, chief medical officer of UCSF Medical Center and UCSF Benioff Children’s Hospital, highlighted UCSF’s practice of electronically tagging every sponge used during surgery. As a result, the hospital has seen a 75 percent drop in the number of sponges accidentally left inside patients, he said.

Regis Kelly, PhD, who directs the California Institute for Quantitative Biosciences, or QB3, headquartered at the UCSF Mission Bay campus, noted that the institute has applied features of the IT industry, such as business partnerships, to speed up the conversion of scientific discoveries into widely available health care products and services.

Of course, the UCSF speakers noted, technology — however flashy and awe-inspiring — cannot serve as a distraction from UCSF’s core mission to improve lives.

“We need to make sure we’re maintaining the focus on the patient, not the data,” said Seth Bokser, MD, MPH, medical director of IT at UCSF Benioff Children’s Hospital and an assistant clinical professor of pediatrics.

Or as Desmond-Hellmann put it when describing the underlying goal of the emerging medical center: “We’re providing patient-centric care…in a place that feels good.”

Sampling of Tweets About UCSF Track at Dreamforce

@jessicajohanna Jessica Sachs:
Personalized med data: need to know what to collect, how, who to share it w/ & how to transform it, across industries! -EssermanMD #df11ucsf

@lauriemccabe lauriemccabe:
#df11 UCSF building a new campus dedicated to science--Benioff donating $100M of his money to the hospital--that's cool!