An investigation into the mysterious inner workings of the malaria parasite has revealed that it survives and proliferates in the human bloodstream thanks in part to a single, crucial chemical that the parasite produces internally. 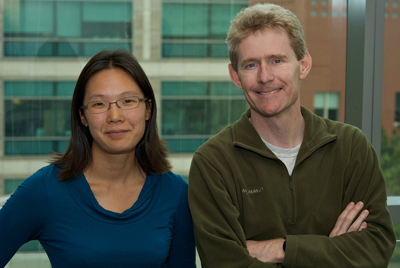 Ellen Yeh, MD, PhD, a pathologist from Stanford Medical School, and UCSF biochemist Joseph DeRisi, PhD, have made a fundamental discovery about malaria parasites that gives new hope for future drugs and vaccines.

According to scientists at the University of California, San Francisco (UCSF) and Stanford Medical School, reporting today in the journal PLoS Biology, this insight immediately provides a powerful new tool for discovering and designing drugs to treat malaria, which infects hundreds of millions of people around the world each year and claims about a million lives – mostly children.

The work also gives researchers a hypothetical new vaccine to test: a weakened version of the parasite, which the scientists grew in the test tube by supplying it with the chemical it needed to live while at the same time treating it with drugs to eliminate its ability to produce that chemical on its own.

“It’s as if we designed a ticking time bomb inside the parasite that’s ready to go off – and when it does, the parasite dies,” said Joseph DeRisi, PhD, a Howard Hughes Medical Institute investigator at UCSF and vice chair of the Department of Biochemistry and Biophysics, who led the work.

In theory, health officials could inoculate people living in areas where malaria is common with a similar “attenuated” form of the parasite. If it works, the modified parasite would not make those people sick but would give them resistance to the pathogen if they were later exposed to it – although that approach would need to be tested in clinical trials to determine whether it would work.

“It is an intriguing possibility that must be explored,” said Ellen Yeh, MD, PhD, the co-author of the study. Yeh is a postdoctoral researcher at UCSF and also on the faculty of the Pathology Department at Stanford University.

Slow, Brutish and Incomplete: A Short History of Malaria Control

Few diseases in history have been as widely spread, poorly understood and fruitlessly fought as malaria. The name itself evokes centuries of misunderstanding – a misnomer that comes from an old Italian construction that means “bad air.” People once thought it was caused by swamp gasses, since it seemed to be prevalent in wet, marshy places.

Since the dawn of modern microbiology research, beginning in the 19th century, scientists have known that the disease is actually caused by a microscopic parasite called Plasmodium, which is spread by mosquitoes common to wet, marshy places. Two of the earliest Nobel prizes went to the scientists who made these basic discoveries, and at the dawn of the 20th century, the situation had never seemed brighter. The possibility that malaria would be eliminated or eradicated was exciting and real then. History proved otherwise.

Full malaria eradication was a major public health effort in the first half of the 20th century and was intensively pursued after World War II. Since that effort was launched, 108 countries have eliminated malaria from within their borders, with another 39 countries en route to that goal. Despite those efforts, malaria remains a major cause of illness in many parts of the world. Today almost half the world’s population lives in places where the disease is common.

According to the Centers for Disease Control and Prevention, about 1,500 cases of malaria still occur in the United States each year, but most are imported when people travel abroad. The real problem exists in several Asian and sub-Saharan African countries, where malaria is both a major leading cause of death and a significant drain on the economy. The World Health Organization estimates that the disease eats up nearly half of all public health expenditures and measurably lowers the gross domestic product of countries where it is common.

Several new approaches to controlling malaria have become available in the last few decades, like insecticide-treated bed nets, but there remains a dire need for new drugs and for effective vaccines to control it.

Hope for Vaccine Lies in the Parasite Itself

The Plasmodium parasite leads a strange and complicated life, crisscrossing between two “host” species – humans and mosquitoes. Within the short span of just a few weeks, the organism cycles through a half dozen radically different sizes and shapes and alternatively makes its home in the human liver, a person’s bloodstream, the insect stomach, and a mosquito’s spit.

For years scientists knew that the most fruitful way to fight the parasite would be to target the form in which it exists in the bloodstream, since that is where the majority of clinical symptoms occur. Existing drugs, like quinine and artemisinin, both target the parasite in the blood.

About 15 years ago, scientists discovered a potential new source of drug targets in a tiny, factory-like enveloped organelle called an apicoplast that exists within the parasite. It was unlike anything found normally in the human body, which suggested that drugs designed to interfere with it might kill the parasite while essentially leaving people unharmed.

“It was a very exciting discovery,” DeRisi said, “but in the years since, the prospect of finding drugs to target it has been frustrating and disappointing in many respects.”

In the last decade, the evolutionary history of this strange organelle has unfolded. The apicoplast is the strange remnant of collisions between competing cells far back in evolutionary history. Scientists reason that through the course of evolution, the apicoplast arose from its origin as a standalone bacterium into its current form through a series of at least two endosymbiotic events, in which one cell engulfs and permanently acquires genetic material and cellular machinery of another for its own benefit.

The discovery of this strange organelle in modern Plasmodium immediately suggested that there might be ways to target it with new drugs. However, even after extensive research revealed the genes of this apicoplast, efforts to raise new drugs against it were mostly fruitless – largely because nobody knew what the organelle actually did while the parasite was inside the human bloodstream.

Now DeRisi and Yeh have shown that the sole essential function of the apicoplast while the parasite is in the blood is to produce a single chemical known as isopentenyl pyrophosphate (IPP), a necessary building block the parasite uses to construct a variety of other molecules.

They discovered this by growing samples of Plasmodium falciparum within red blood cells in the test tube. If they treated the parasite with antibiotic drugs that kill the apicoplast, the parasites would all die. If they fed the parasites IPP at the same time, they lived – even though the parasites lost the organelle completely over time.

The work provides a new tool for probing the basic biology of the Plasmodium parasite, and it also suggests a new way of discovering promising new drugs to fight malaria. While many previous drug-screening efforts have identified multitudes of compounds that appear to inhibit growth of the parasites, most are without a known target within the parasites. Knowing the target of a drug greatly enables the necessary process of medicinal chemistry, in which the compound is optimized with respect to the target. Now, DeRisi and Yeh’s discovery has provided a simple tool to determine whether any particular drug candidate targets the apicoplast.

The attenuated form of the parasite also provides an intriguing hypothetical vaccine candidate – and one that would be relatively cheap to produce, DeRisi said. However, he cautioned, the history of malaria control is filled with failed efforts, and several past vaccines have fallen short. Only time and clinical trials will tell if this is a viable solution to the problem.

“This parasite has clearly evolved to be an immune system escape artist,” DeRisi said. “It’s no surprise that the simple approaches have not worked.”

The article, “Chemical Rescue of Malaria Parasites Lacking an Apicoplast Defines Organelle Function in Blood-stage P. falciparum” by Ellen Yeh and Joseph L. DeRisi appears in the August 30, 2011 issue of the journal PLoS Biology. After 5:00 p.m. ET on 8/30/2011, the article will be available at http://dx.doi.org/10.1371/journal.pbio.1001138

This work was funded by the Howard Hughes Medical Institute.