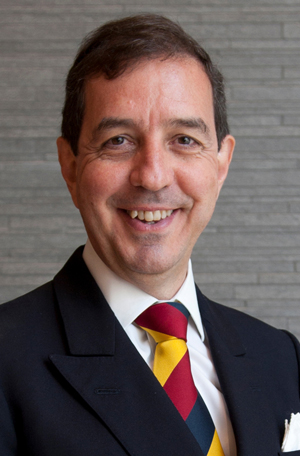 Jaime Sepúlveda, MD, MPH, DrSc, who will join the University as executive director of UCSF Global Health Sciences on September 1, delivered a commencement address to graduates of the Masters of Sciences in Global Health. Read story.

Here is his full commencement address to global health graduates at UCSF on Aug. 5:

2011 UCSF Class of Masters of Sciences in Global Health

When my father was born in 1912, life expectancy in Mexico was only 33 years, and the only vaccine available was Smallpox. I was born in 1954; life expectancy had increased by then to 50 years. In addition to Smallpox, I had the fortune to be vaccinated against diphtheria, whooping cough and tetanus. I suffered from measles as a child, since there was no vaccine for it at the time. Several of my schoolmates suffered paralytic Polio, for the same reason.

When my own children were born in the 1980’s, they benefited from an expanding array of newer vaccines, like MMR. They suffered from varicella, however, a disease that is now vaccine-preventable. Their birth cohort could expect to live into their sixties.

A child nowadays — depending on where she is born — can expect to live as much as 94 years in Monaco, or as little as 32 if born in Swaziland. That is almost a three-fold difference.  Similarly, newborns can benefit from the 16 life-saving regular antigens now available — with more coming in the pipeline — or receive none at all, depending on where they live. This sad reality is something that should deeply disturb all of us. We know vaccines prevent disabilities and deaths, and thus increase life expectancy. We know vaccines are the most cost-effective tool we have in global health. We take vaccination for granted in this country. But the advances of science and public health are not benefiting the majority of the children in the world.

As a moral imperative, we should strive to have all babies in the world equally protected against microbial threats, giving them an equal chance at starting life. Immunological equity is the first concrete goal we should pursue in global health. It is the only attainable form of health equity we can aspire for in the near future.

Dear Graduates: This takes me to my first recommendation.

Have a social conscience. Defend the most vulnerable. Help reduce inequities.

One of the most profound shocks and moving experiences I remember was during the measles epidemic that hit Mexico in 1989. I was, at the time, Director of Epidemiology at the Ministry of Health of Mexico. We thought we had then reasonable vaccination coverage; reality proved us to be dead wrong. In the course of a few months, measles spread throughout the country like wildfire, killing more than 6,000 children. It became the first cause of death for under-fives in the poorest states. At one time, during a supervision visit, the Minister of Health and I took a very long ride in a helicopter — into the remote mountains in Oaxaca — to a small rural community called Zochiquilazala. I will never forget the shame and pain we felt: all the children in the village had died. Malnutrition and measles, and our own neglect, had killed them.

This leads me to a second recommendation.

Don’t be complacent. Have a sense of urgency in your work. People are suffering right now with burdens we can solve.

I have had the privilege of working at the Bill & Melinda Gates Foundation for the last few years. I deeply admire their mission, and feel privileged for having worked closely with Bill Gates on vaccine issues. In a memorable commencement speech at Harvard in 2007, Bill Gates described how he and Melinda became hooked into global health when they read in an article that rotavirus kills half a million kids every year, none of them in the US. They asked: “How could the world let these children die?”

The answer, he said, is harsh and simple: “the market did not reward saving the lives of these children, and governments did not subsidize it. So the children died because their mothers and their fathers had no power in the market and no voice in the system.” Later in his speech, Bill Gates told his Harvard audience: “I hope you will judge yourselves not on your professional accomplishments alone, but also on how well you have addressed the world’s deepest inequities.” And he finished: “Knowing what you know, how could you not?”

Follow inspirational leaders. Get good mentors, so you can yourself eventually become a great leader and mentor.

I am fortunate to have several mentors in my life. We all need mentors; we need role models and moral referents. Two Ministers of Health in Mexico, Dr. Soberon and Dr. Kumate, gave me unique opportunities for growth; Jim Grant of UNICEF taught me about thinking big and aiming to the limits; Bill Foege has been a source of inspiration for all of us in global health. Tachi Yamada and Bill and Melinda Gates placed their trust in me in positions of responsibility. Some of my heroes are here in this room. Haile Debas first brought me to UCSF in 2007 for a sabbatical, and has been the main force in bringing me back again. Richard Feachem and George Rutherford are titans in their own right in global health. John Ziegler is the epitome of an educator. In my new role, I stand on the shoulders of these giants.

You are the next generation of leaders in global health. One day you will be asked to give a commencement talk. My advice to you is to develop a life-long love for learning. Keep learning all you can about your field. But also learn about history, if only not to repeat mistakes.

Reading the history of smallpox vaccination is both a fascinating experience and a mandatory assignment for any student of global health. I encourage you to read any one of the best books on the topic, from Don Hopkins’ “Princess and Peasants” to Henderson’s “Death of a Disease” to Bill Foege’s “House on Fire.” My friend Jose Esparza — who is a walking encyclopedia and collector of smallpox memorabilia — has shared with me with wonderful historical vignettes, some of which I am using here.

The discovery of smallpox vaccination by Jenner is surely one of the first and most important advancements in improving health worldwide. Jenner’s discovery, made more than 200 years ago, immediately led to the first global health intervention in history, with extraordinary results.

Edward Jenner, born in 1749, was a country doctor in his native England. It was a common practice at the time to “protect” against smallpox (called variolation) by inoculating fluid from pustules of mild cases of smallpox to healthy individuals. About 5 percent of these actually develop full-blown smallpox, but the rest had only mild symptoms and were protected for life. Jenner’s stroke of genius consisted in the observation that milkmaids exposed to cowpox —present in the pocks of the cows’ utters — were immune to smallpox. His historical experiment in May 1796 consisted in taking fluid from vesicles in the hands of a milkmaid who had contracted cowpox and inoculating it in the arm of an eight-year-old boy, who was subsequently challenged with a shot of smallpox.

Cow in Latin is “Vacca;” therefore the fluid from cowpox pustules was referred to by Jenner as “vaccine," and the practice called “vaccination.” Jenner published his findings in a book in 1798, which was a huge blockbuster. It was almost immediately translated into several languages, and rapidly influenced global health policy.

It is amazing to see how rapidly Jenner’s discovery was adopted in Europe and disseminated to the rest of the world. Even by today’s standards, the spread of the technology — and consequent epidemiological impact — was incredibly fast. Within a year or two after the publication of Jenner’s book, vaccination started in Hannover and Vienna, but also in Spain, Bohemia, Boston and Moscow. The Russian Empress was in fact so enthusiastic about this medical discovery that she demanded that the first Russian boy receiving the vaccine be named: Vaccinoff! The King of Spain Charles IV, who had lost one of his sons to smallpox, ordered what then became the first global vaccination campaign. Dr. Francisco Xavier de Balmis departed from Spain with a group of orphans that helped keep the vaccine alive — by passing it from arm to arm — in November 1803. That expedition went to all of Latin America and the Caribbean, and then to the Philippines and the rest of Asia. As you know, smallpox was successfully eradicated in October 1977, with a young man — a hospital cook in Somalia — as the last case.

Fast forward to the year 2000. At the change of the millennium, several important developments took place in global health. The United Nations agreed to a set of commitments, known as the Millennium Development Goals (MDG’s). Two large funds were created: GAVI and the Global Fund (of which Dr. Richard Feachem was the founding director). The Bill & Melinda Gates Foundation started to operate on a large scale.

All of these developments are great news, and have helped not only to place global health high in the political agenda, but to have epidemiological impact throughout the developing world. To continue on the vein of vaccines, the efforts deployed to reach the most vulnerable kids in the world are having an impact. Let me quickly refer to the work of GAVI, on whose board I serve as Vice-Chair. GAVI is a public-private partnership created ten years ago — and has since helped to prevent five million deaths in 70 developing countries. We are now aiming to save four million future deaths by 2015, with the newer vaccines available. In a successful pledging conference that just took place in London last June, we were able to raise the funds needed, thanks to very generous pledges — over 4 billion dollars — from the UK, the Gates Foundation, Norway, the USA and others.

Let me bring this short talk to a conclusion. The tragedy of the measles epidemic of 1989 in Mexico triggered the Universal Vaccination Program, which had “Immunological Equity” as a motto, as well as its philosophical and political driver. Within three years the concept was a reality. Polio, measles, diphtheria and rubella were completely eliminated in the country as a consequence. Thus, even in a country with such blatant and painful inequalities, children in Oaxaca or Chiapas had the same chances against vaccine-preventable microbes than in my middle-class neighborhood in Mexico City.

We should make immunological equity a reality in all corners of the world. We should give every child the same opportunities starting in life. We should continue Jenner’s example, and finish the job of eradicating polio. And do the same with measles and other technically eradicable diseases. We have the technology, the know-how and the resources. We can do it. And “because we can, we must."