Genetic secrets of multiple sclerosis may be buried in 50 “hot spots” in the human genome, which were just uncovered by a consortium of more than 240 scientists in 23 countries, including researchers at the University of California, San Francisco (UCSF).

Led by the International Multiple Sclerosis Genetics Consortium and the Wellcome Trust Case Control Consortium in the U.K., the results will immediately help to frame the genetics of multiple sclerosis by allowing scientists to identify many of the genes involved and determine how they contribute to this complex disease.

“We have completed a large part of the genetic puzzle of the disease,” said Jorge Oksenberg, PhD, who is the G.A. Zimmermann Endowed Chair in Neurology at UCSF and a co-author on the study.

Multiple sclerosis (MS) is a complex disease that is not caused by a single gene or environmental factor. Rather, many overlapping causes contribute to the disease, as shown here. These may include the action of various genes and exposure to chemicals, pathogens, and other external triggers. The study of epigenetic and other regulatory mechanisms linked to MS susceptibility is only beginning to emerge. Image by J.Oksenberg/UCSF.

Longer term, the findings will guide future efforts to assess an individual’s risk of developing multiple sclerosis and to develop new drugs for treating this complex disease, which affects some 2.5 million people worldwide and 400,000 in the United States.

“We all share a sense of great optimism that these results will set the stage for a better understanding of how multiple sclerosis begins and for the development of better means to treat, and maybe even prevent, the disease in the future,” said Stephen Hauser, MD, the Robert A. Fishman Distinguished Professor and chair of the Department of Neurology who was the senior author from UCSF on the study. 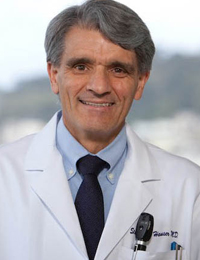 Described in the Aug. 11, 2011 issue of the journal Nature, the study compares genetic material from tens of thousands of individuals in the United States and Europe, including 10,000 people with multiple sclerosis.

It identified 50 distinct genetic loci, or regions of DNA sequences, that “contribute” to multiple sclerosis. These loci do not necessarily indicate specific genes that cause the disease but rather locations on the genome where there may be genes and genetic variations that influence someone’s risk of developing the disease.

Follow-up studies at UCSF and elsewhere will attempt to identify the exact genes involved and determine the how they contribute to the disease.

Multiple sclerosis is a debilitating, chronic disease that often strikes people before the age of 40 and is more common in women than in men. It is an autoimmune disease and in most cases involves periodic flare-ups when a person’s immune system attacks the myelin sheath that insulates nerve fibers in the brain and spinal cord. Damage to these sheaths can short circuit signals traveling along the nerve fibers, disrupting the normal flow of communication from the brain and causing a range of symptoms – including weakness, sensory disturbance, fatigue, visual impairments and loss of coordination.

Scientists have known for years that genes play a role in multiple sclerosis because it runs in families. They have also known that the disease’s pathogenesis – how often and how severely the attacks occur – varies among patients, which also appears to be linked to genetics. African Americans, for instance, are less likely than Caucasians to develop multiple sclerosis, but those who do get it tend to suffer more severe attacks.

However, like many neurological ailments, the disease is not linked to a single gene but is multifactorial, potentially involving numerous genes and environmental triggers. Scientists are still trying to identify all the culprits.

In 2007, a precursor study looked at the DNA of 3,000 individuals, about a third of whom had multiple sclerosis, using a technique known as genome-wide associations. Parsing this DNA, the study found four locations in the human genome with genetic components common among those with the disease. Previously scientists in the field had known of only one such location.

The success of that study and follow-up efforts spurred the new, much larger study, which verified 21 candidate genetic loci already discovered and uncovered 29 additional hot spots. These hot spots are analogous to pings from a metal detector in that a strong ping indicates the presence of some buried metal object, but gives no indication as to whether it is sunken treasure or an old rusty can.

According to Oksenberg, researchers already have strong hints of which underlying genes may exist in these hot spots. Because multiple sclerosis is caused by immune cells attacking neurons, some of the newly discovered loci are in spots that contain genes involved in neurological function. Most of the loci contain genes related to immune processes.

For instance, one of the hot spots contains genes that control the levels of a protein called IL-7 receptor, a key regulator of T cells, which are linked to periodic multiple sclerosis attacks.

Other hot spots uncovered by the consortium are less clearly linked. According to Oksenberg, each of the 50 hot spots is another possible avenue toward uncovering the genetics of multiple sclerosis and helping people with the disease.

“Armed with this new genetic landscape for multiple sclerosis, it will now be possible to identify the culprit genes, understand how they alter function, and determine how they could trigger the onset of the disease,” Hauser said.

“Now we have a very good roadmap to start down,” Oksenberg agreed.

The article, “Genetic risk and a primary role for cell-mediated immune mechanisms in multiple sclerosis” is available here.