San Francisco General Hospital trauma surgeon Rochelle Dicker has treated many pedestrians who ended up in the emergency room after being struck by vehicles. She never refers to those collisions as accidents. 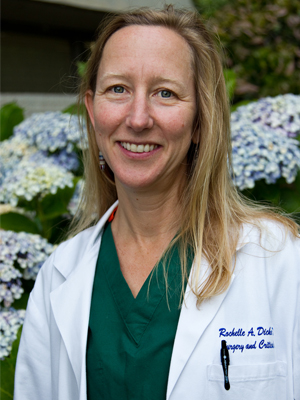 “An accident implies there is nothing we can do about it. Like it’s an act of God. But an injury or crash implies that there is something we can do to potentially reduce risk and prevent harm,” said Dicker, MD, one of the directors of the San Francisco Injury Center and associate professor of surgery and anesthesia at UCSF.

Dicker has done a lot. She and her four-person research team conducted an unprecedented analysis of the direct medical costs of auto-versus-pedestrian encounters in San Francisco. They also looked at where the incidents occurred, so that they could identify “high cost areas and high injury morbidity areas, or hot spots” and work with city officials to consider countermeasures that could save lives and money.

“The rate of pedestrian injury we see in San Francisco is just horrendous,” Dicker said. “It’s one of the highest in the country. I deal with it whenever I’m on call as a trauma surgeon. As a prevention researcher, I have an opportunity to take my experiences and try to address the root of the problems. I wanted to figure out a way to get attention to pedestrian safety and hopefully affect policy.”

The study, titled “Cost-Driver Injury Prevention: Creating an Innovative Plan to Save Lives with Limited Resources,” was published in the Journal of Trauma in April. Some of its ripple effects were felt even before the publication date, thanks to presentation of the data to city officials by Director of Prevention Dahianna Lopez, RN, MSN, MPH, and are likely to influence how San Francisco treats pedestrian safety for years to come. Lopez was honored for her work with the Chancellor's Award for Public Service in May.

The study scrutinized pedestrian injuries treated at San Francisco General Hospital from January 2004 through December 2008. Given that SFGH is the only Level 1 trauma center in the city, Dicker was confident that most, if not all, severely wounded walkers would end up there. Any injuries that occurred in neighboring San Mateo County and were dealt with at SFGH were excluded, along with any intentional assaults using a vehicle.

A total of 3,598 pedestrians remained.  Of those, 931, or 26 percent, were admitted to the hospital and accounted for 82 percent of total costs. During the five-year period, those total costs-- the actual amount paid for medical care — were $74.3 million. Only 24 percent ($17.6 million) of the total cost was charged to private insurance and the rest was charged to public funds such as Medi-Cal (28 percent), Medicare (17 percent) and to patients themselves (16 percent). To calculate the direct medical cost, researchers took the sum of three major factors: hospital costs, professional fees and ambulance charges.

Statistics Only Part of the Story

The injured pedestrians were a mix of ages: 72 percent were adults 20 to 64, 14 percent were 19 or under and 13 percent were over 65. Seven percent were homeless. The average hospital stay was more than 11 days. Nine percent of those who were hurt died.

“You kind of realize all this when you’re down there dealing with it,” Dicker said. “But you don’t know for sure until you look through all the numbers. It’s still shocking, even though I’m living it. As a trauma surgeon, it appeared to be extraordinarily costly. And, in fact, that was the case.” 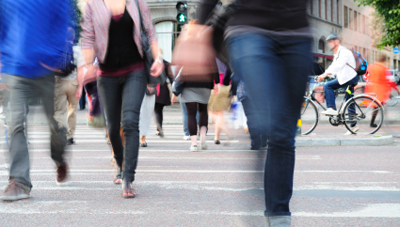 More recently, researchers found that one of every four traumatic injuries in San Francisco was pedestrian-related.

The pedestrians studied in San Francisco were most likely to be injured during morning or evening rush hour. And the dense, highly commercial District 6 — the supervisorial district that in the study years included the Tenderloin, South of Market and the busiest slice of Market Street — posed by far the greatest risk, racking up $12.8.million, or 17 percent, of the total price tag for walkers admitted to San Francisco General. That data captured the immediate attention of the District 6 City Supervisor.

By correlating the costs of these cases with the city’s 11 supervisorial districts, Dicker wanted to highlight hot spots that were good candidates for countermeasures, ranging from mid-block crossings, roundabouts and flashing crosswalks to speed control and changes in the built environment.

“Providing not only an account of where collisions occur but also the monetary cost of the injuries incurred at those sites gives credence to instituting life-saving and cost-saving measures targeting speciﬁc locations and speciﬁc road trafﬁc issues,” said the study, which described the problem as a compelling public health issue.

“The report really helped in boosting the recognition that this is a problem that affects all of us,” Dicker said. “A lot has happened, partly as a result of the study.”

“It’s really exciting,” Dicker said. “Many of the supervisors, people at the DPH and our friends at the MTA have a true commitment to making this better.”

And through this work, Dicker and her team are also carrying out one of the prime missions of UCSF: translating research into policy and practice.