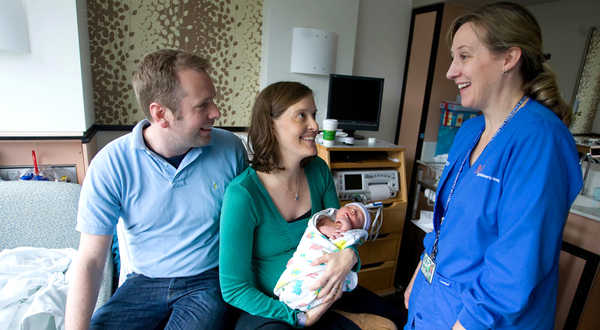 New mothers who practice expressing their breast milk by hand during the first days following their child’s birth are more likely to still be nursing two months later than mothers who use an electric breast pump, according to findings from a new study led by researchers at UCSF.

The randomized trial, which focused on healthy, full-term newborns having trouble nursing, is the first to compare how the two methods of milk collection affect future breastfeeding.

“Until now, we didn’t know which technique was preferable in the early postpartum period. This study provides the first evidence in favor of hand expression,” said lead author Valerie Flaherman, MD, MPH, an assistant professor of pediatrics at UCSF and pediatrician at UCSF Benioff Children’s Hospital. “Based on our findings, clinicians should consider recommending hand expression to new moms whose babies are feeding poorly.”

Study findings are published online by the journal Archives of Disease in Childhood, and will appear in an upcoming print issue of the journal.

Breastfeeding is known to offer wide-ranging preventive health benefits for babies, reducing their risk for infections and chronic diseases including diabetes, asthma and obesity, and providing the perfect balance of nutrients to help infants grow into strong and healthy toddlers. The American Academy of Pediatrics recommends that women who do not have health problems exclusively breastfeed for the first six months of life to give maximum benefits to their child.

Although nursing is a natural process, newborns are sometimes unable to latch properly to a mother’s breast shortly after birth, hindering the infant’s ability to ingest the antibody-rich early breast milk called colostrum. In these cases, health providers often advise mothers to practice expressing their own milk, meaning they take milk from the breast without the baby nursing. Milk expression, which can be done either by hand or by using a breast pump, is thought to potentially increase a woman’s milk production through additional breast stimulation.

“Mothers who are new to breastfeeding are often very open to suggestions for improving their nursing experience since it can be frustrating if a baby isn’t latching well,” Flaherman said. “If mothers feel strongly about a method of expression, they should make the choice that is right for them. However, if mothers are open to either method of milk expression, providers should consider teaching hand expression instead of pumping in the early newborn period.”

The study enrolled 68 mothers whose newborns were having trouble latching and sucking properly 12 to 36 hours after birth during the postpartum hospital stay. The participants were recruited from 2007 to 2009 in the nurseries and postpartum units at UCSF Benioff Children’s Hospital, Kaiser Permanente South Sacramento Medical Center and Stanford University Medical Center.

Each mother-infant pair was randomly assigned to either the breast pumping or hand expression study group, and a doctor or nurse then trained the mothers in the designated method of milk expression. After milk expression occurred, the volume of milk was measured, and mothers in both groups fed their babies the expressed milk using a syringe, cup or spoon. The overall milk volume did not differ by method of expression.

The mothers later were asked a number of questions to evaluate their perceptions and experiences with breastfeeding. The verbal questionnaire administered during the hospital stay addressed issues related to pain while breastfeeding and the mothers’ comfort expressing and nursing with others present. A follow-up questionnaire, administered three times, assessed the duration of breastfeeding following hospital discharge.

Additionally, mothers in the hand expression group reported feeling more comfortable expressing milk with others present than mothers in the breast pump group, and they tended to feel more comfortable nursing with others present, as well. According to the researchers, feeling awkward or embarrassed in the presence of others might be a barrier to continued successful breastfeeding.

“If our interventions during birth hospitalization can help mothers feel more comfortable nursing in front of others, it could contribute to longer breastfeeding duration,” said senior author Thomas Newman, MD, MPH, a UCSF professor of epidemiology, biostatistics and pediatrics. “Our results are exciting and underscore the need for further research to confirm these findings and to explore the reasons for an association between early expression practice and later breastfeeding outcomes.”

The research was supported by grants from the National Center for Research Resources and the National Institute of Children Health and Human Development.