Researchers at the University of California, San Francisco (UCSF) and in Michigan, North Carolina and Spain have discovered how genetic mutations cause a number of rare human diseases, which include Meckel syndrome, Joubert syndrome and several other disorders. 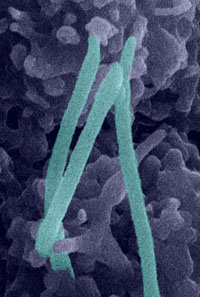 Protrusions that dangle off of cells called cilia

The work gives doctors new possible targets for designing better diagnostics to detect and drugs to treat these diseases, which together affect perhaps one in 200 people in the United States.

On the surface, these diseases look very different. Meckel syndrome causes deadly brain malformations and kidney cysts. Joubert syndrome strikes people with severe movement disorders. But the work of the UCSF-led team, published this week in the journal Nature Genetics, found similarities between the diseases at the molecular level.

“We think these diseases have a common underlying cause,” said UCSF developmental biologist Jeremy Reiter. “They are fundamentally caused by defects in ‘antenna’ on cells.”

Seen in Twins from Bangladesh

Technically known as cilia, these antennae are protrusions that dangle off cells and, like tiny receivers, allow the cells to explore and interact with their environment. Found everywhere from the brain to the eyes to the lungs in humans, these antennae also exist in creatures as diverse as gorillas, gnats, aardvarks and algae.

What cilia do depends on where they are in the body. In the eyes or deep within the nostrils, they are covered with sensory proteins and help capture light and odors, forming the basis of our senses of sight and smell. In the lungs, cilia move, helping to expel foreign particles from the airways. They also lend mobility to sperm.

This wide range of functions is also reflected in people with genetic disorders like Joubert syndrome, which affects cilia in specific parts of their body. People with these diseases suffer symptoms related to what those cilia do, such things as blindness, infertility or inability to smell.

Reiter and his colleagues looked at the DNA of twins from Bangladesh born with Joubert syndrome, and they showed how certain mutations associated with the disease work.

They found that these mutations lead to malfunctions in a protein called Tectonic1, one of several that forms a crucial collar around the base of a cilium.

You can think of the collar as a turnstile at the foot of a long bridge connecting a remote island to the mainland. If the turnstile is damaged, traffic stops, and there is no way to drive goods and passengers out to the island.

Similarly, mutations in Tectonic1 prevent the collar from forming correctly, and this causes defects in the cilia within the brain and ultimately leads to Joubert syndrome, Reiter and his colleagues determined. In cells, they showed that restoring a non-mutated form of the protein restores the function of the cilia.

In addition to UCSF, authors of the paper are affiliated with Centro de Investigación Biomédica en Red (CIBERNED) and the University of Valencia in Valencia, Spain; the University of Michigan in Ann Arbor, MI; Duke University in Durham, NC; and Guy’s Hospital in London.

The research was supported by the National Institutes of Health, the March of Dimes, the Burroughs Wellcome Fund, the Packard Foundation, the Sandler Family Supporting Foundation and the Howard Hughes Medical Institute.