As a Santa Barbara high school student, UCSF bioenginer Tejal Desai  got a kick out of making things work. Her father was a chemical engineer, and she thought she knew what engineering was all about. 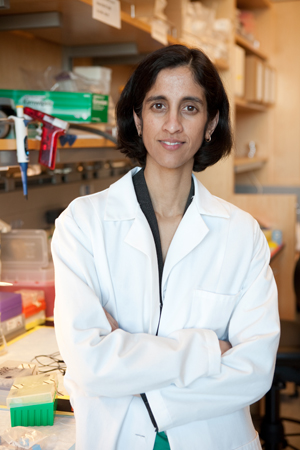 So, she was startled when a bioengineer visited her class and told the students about research to develop artificial organs and implants.

“I was very excited," said Desai, PhD, a professor in the Department of Bioengineering and Therapeutic Sciences in the UCSF School of Pharmacy. "I had always thought that engineering was about building bridges and mechanical devices. I didn’t know you could use it to help people.”

The class visit was part of a national program to encourage girls to pursue engineering careers. The revelation about artificial organs started Desai on two paths. She not only became a bioengineer, but also an outspoken advocate for young women entering science and engineering fields.

“Because I was so influenced by that program myself, I’ve always had an interest in  mentoring girls of various backgrounds who are interested in science and engineering careers," she said. "I hope that if you can encourage them and make them enthusiastic, it will help them continue. It’s something I believe in.”

As a bioengineering undergraduate at Brown University, Desai also studied sociology and political science, and after college, she played an active – even activist – role in urging her alma mater to assure that female students and faculty had full opportunity to pursue the sciences and engineering. She ended up writing a 100-page document outlining admission policy changes that would encourage more student and faculty diversity in these fields.

Her other path has led her to develop new ways to make implantable medical devices so small that their individual parts are the size of human cells. Such miniscule implants can overcome the limitations of conventional therapy to treat diabetes, kidney failure and other debilitating diseases.

Read the full story on the University of California research website.