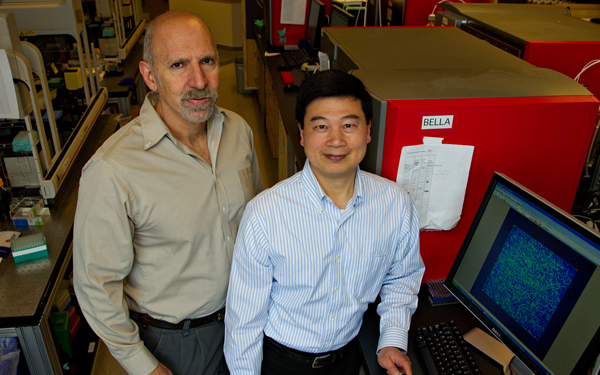 Neil Risch, PhD, co-director of the Research Program on Genes, Environment and Health and director of the UCSF Institute for Human Genetics, stands with Pui-Yan Kwok, MD, PhD, a UCSF professor who led the single nucleotide genotyping work at UCSF.

One of the nation’s largest and most diverse genomics projects has reached its first major milestone in just 15 months. Scientists have genotyped the DNA and analyzed the length of chromosome tips in more than 100,000 Kaiser Permanente members who agreed to be part of the research.

The project will offer a novel resource for the world of health science research by providing scientists with high quality, genome-wide genetic data on a large and diverse population, according to lead investigators Cathy Schaefer, PhD, executive director of the Kaiser Permanente Research Program on Genes, Environment and Health (RPGEH); and Neil Risch, PhD, co-director of the RPGEH and director of the UCSF Institute for Human Genetics.

“By funding this project, the National Institutes of Health has significantly accelerated research into conditions such as cardiovascular disease, diabetes, cancers, mental health disorders, and age-related diseases such as Alzheimer’s disease,” Schaefer said.

The genetic information generated by the project will also include data about drug metabolism and drug response, which may help researchers to discover genetic factors that explain differences in the way people respond to medications.

This would, in turn, help doctors provide patients with the best medicines for them individually, with less trial and error, based on their genetic background. It could also help researchers understand why some patients with cancer or heart disease, for example, develop certain symptoms and other patients do not, insights that may lead to new treatments and, in some cases, new ways to lessen the severity of or even prevent disease, Schaefer added.

The project has now completed its first phase, which was to extract and genotype DNA from a cohort of 100,000 participants with an average age of 65 and measure the length of participant telomeres – tiny units of DNA that bind the ends of chromosomes. Telomere length may reflect the degree of aging in a person’s cells and may be a marker for age-related conditions.

Risch said the pace of the project was only possible because of the alignment of a number of critical factors:  Kaiser’s Permanente’s extensive health records and thousands of willing participants from the diverse Northern California region; new genotyping technology from Santa Clara, Calif.-based Affymetrix, Inc., which produces scalable genomic analysis tools; and a history of collaboration between Kaiser Permanente and UCSF, two research institutions with complementary strengths for this project.

“The truth is that this project would have been impossible at any other time or place,” Risch said. “No single institution could have combined this level of genetic science with such deep health records on this diverse and large a number of patients. And without the funding, we could never have developed the technology to make this happen.”

“The truth is that this project would have been impossible at any other time or place,” Risch said. “No single institution could have combined this level of genetic science with such deep health records on this diverse and large a number of patients. And without the funding, we could never have developed the technology to make this happen.”

”The completion of genotyping on this large and diverse population marks an unprecedented milestone in population-based genetics research,” said Richard J. Hodes, MD, director of the National Institute on Aging at the National Institutes of Health. “The genetic information, combined with the longitudinal clinical and health data that are already part of the Kaiser Permanente database, along with California environmental data, will create a unique and powerful resource to help answer research questions about aging, health and disease.”

To complete the genotyping project in two years, as required by the funding, Kaiser Permanente first had to build a new, high-throughput laboratory in Oakland, Calif., to extract DNA from more than 100,000 saliva samples in 15 months. The extracted DNA was transferred to UCSF’s Institute for Human Genetics, which worked with Affymetrix to create custom Axiom® arrays for genotyping 675,000 to 900,000 genetic markers – comprised of single nucleotide (SNPs) and insertion-deletion polymorphisms – across all 100,000 samples.

“This project reflects the incredible advances that have occurred in the past decade in the field of genomics and the speed and cost-effectiveness of genotyping technology,” said UCSF professor Pui-Yan Kwok, MD, PhD, who led the SNP genotyping work at UCSF. “Three years ago, we could never have undertaken a project of this size, much less completed it in only 15 months.”

Separate samples of DNA from the same 100,000 individuals were also analyzed in the laboratory of UCSF Professor Elizabeth Blackburn, PhD, who received the Nobel Prize in Physiology or Medicine in 2009 for her discovery of telomeres. The Kaiser Permanente/UCSF project will create the largest resource of telomere data available and will be the first such resource linked to health records of this number and diversity through Kaiser Permanente.

Data from the genotyping project will be processed and cataloged by RPGEH and UCSF scientists over the next year so it can be made available to researchers in late 2012. 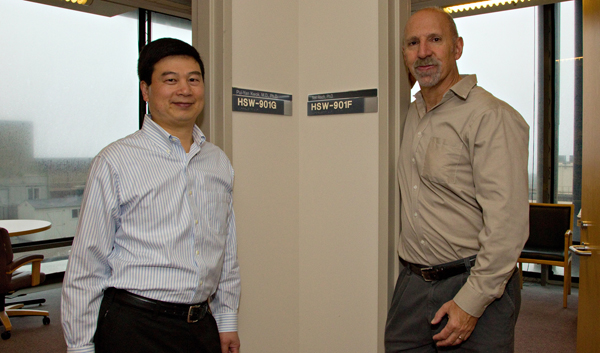 Pui-Yan Kwok, MD, PhD, and Neil Rish, PhD, often talk to each other just outside their respective offices at UCSF.

About UCSF Institute on Human Genetics

The UCSF Institute for Human Genetics serves as a focal point for campus-wide activities in human genetics and has faculty members engaged in human genetics research spanning the four schools: Medicine, Nursing, Pharmacy, and Dentistry. The major aim of the Institute is to create an exciting, productive and collaborative environment for research and training in human genetics, and to provide institutional support and resources, such as the Genomics Core Facilities, for faculty research and for teaching in a number of UCSF graduate and medical school programs. For more information, go to www.humgen.medschool.ucsf.edu.

The University of California, San Francisco is a leading university dedicated to promoting health worldwide through advanced biomedical research, graduate-level education in the life sciences and health professions, and excellence in patient care. Please visit www.ucsf.edu.

About the Research Program on Genes, Environment, and Health (RPGEH)

The RPGEH is designed to facilitate epidemiologic studies of both genetic and environmental influences on common health conditions, such as heart disease, diabetes, cancer, asthma, mental health disorders, and many others. The building blocks of the RPGEH are:

Participation in the RPGEH is completely voluntary. All participants must provide written and informed consent and may withdraw from the program at any time.

The Division of Research maintains RPGEH information and databases confidentially with security controls. RPGEH data are separate from the Kaiser Permanente health plan and medical records. Information gathered by the RPGEH, including information derived from testing of members’ DNA samples provided for research, will not be placed in a member’s medical record or shared with health plan administration or insurance departments.

The RPGEH information and databases are used only for approved research and will never be used to set or increase health insurance premiums or make decisions on a member's health insurance coverage.

Kaiser Permanente does not sell or trade any genetic material or data gathered for the RPGEH for profit. For more information, go to www.rpgeh.kaiser.org or call 1-866-369-2157.

About the Kaiser Permanente Division of Research

The Kaiser Permanente Division of Research conducts, publishes, and disseminates epidemiologic and health services research to improve the health and medical care of Kaiser Permanente members and the society at large. It seeks to understand the determinants of illness and well-being and to improve the quality and cost-effectiveness of health care. Currently, the Division of Research’s 500-plus staff members are working on more than 250 epidemiological and health services research projects. For more information, go to www.dor.kaiser.org.

Kaiser Permanente is committed to helping shape the future of health care. We are recognized as one of America's leading health care providers and not-for-profit health plans. Founded in 1945, our mission is to provide high-quality, affordable health care services to improve the health of our members and the communities we serve. We currently serve 8.8 million members in nine states and the District of Columbia. Care for members and patients is focused on their total health and guided by their personal physicians, specialists and team of caregivers. Our expert and caring medical teams are empowered and supported by industry-leading technology advances and tools for health promotion, disease prevention, state-of-the art care delivery and world-class chronic disease management. Kaiser Permanente is dedicated to care innovations, clinical research, health education and the support of community health. For more information, go to: www.kp.org/newscenter.