What started as a 2 a.m. conversation over coffee – a commiseration, really – between two fourth-year medical students, ended with the development of a free mobile medical translation application with the potential to profoundly impact patient care worldwide. 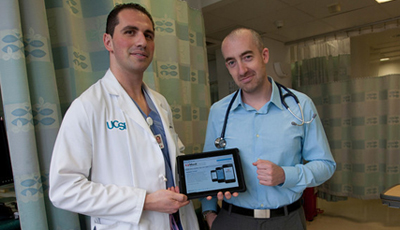 Brad Cohn had just finished a long shift at San Francisco General Hospital (SFGH), during which he had struggled to communicate with a diverse lineup of patients, none of whom spoke English.

UCSF's partner in public health since 1873, SFGH offers assistance in more than 65 languages through a combination of staff medical interpreters, a telephone language line and a video medical interpretation system proving real-time access to providers and patients within four minutes. However, at night and on the weekend, staffing is reduced and the waits can be longer.

Later that night at the coffee shop, Cohn’s friend Alex Blau listened intently to his fellow med student’s frustration. Blau had run into language barriers on his rounds, too.

“Ninety percent of diagnoses come from the patient’s self-reported medical history, so the ability to communicate is critical,” Blau said. “Time is not an asset doctors or patients have. You need that information when you need it.”

What was needed, they agreed, was a tool – a software application for a PDA or an iPhone – that would translate medical history questions from English into other languages.

The tool didn’t exist.  So they invented it, inspired, they say, by UCSF’s core values – excellence and efficiency in patient care, a global vision, and dedication to community service.

After nearly three years of late nights, tapping their own bank accounts, and forging new alliances, the duo’s early-morning dream became a reality.

Their free mobile translation application, MediBabble, made its debut on the iTunes Store in April, and with more than 8,000 downloads to date, the software is winning critical praise. It was immediately declared a standard-setting "must-have" application by iMedicalApps.com, the premiere mobile health application review site, and was voted number one by public vote in the 2011 Medical App Awards on Scrubdin – a website for choosing health-related software where Blau is now a contributing editor.

MediBabble uses touch-screen software that allows health care providers to play medical history questions and instructions out loud, so far in five languages. From questions as simple as “Can you tell me your name?” to more specific inquiries like, “Do you get recurring lung infections?” the app translates more than 2,500 exam questions into Russian, Spanish, Cantonese, Mandarin and Haitian Creole.

The first four languages were chosen to match San Francisco’s demographics; the last was added as an immediate response to the need for disaster medical care in Haiti after its January 2010 earthquake. Once downloaded, MediBabble does not require an Internet connection, so it’s usable anywhere – from commonly shielded hospital settings to resource-strapped urban clinics and disaster zones.

MediBabble relies on a symptom-based approach already commonly used by medical practitioners worldwide. It starts by gathering information about the current complaint – such as cough, fever, or chest pain – then segues into the patient’s history. Designed to draw out medical, social, occupational and family histories, as well as sensitivities to medicines and allergies, the application uses closed-ended questions to elicit yes/no answers or gestures from the patient, who can then point to certain body parts or dates on a calendar, for example, to convey the date a problem began.

Team Grows to Include Others

To create MediBabble, Blau and Cohn enlisted a team of UCSF faculty, doctors and medical translators, including their own professor, Lawrence M. Tierney, MD, professor of medicine, UCSF School of Medicine and associate chief of San Francisco’s VA Hospital, who co-wrote the book on medical history-taking. With patient safety a primary concern, all of the app’s phrases were written and reviewed by the team for accuracy and cultural appropriateness.

The team grew to include other medical students as well as outside software programmers and interface designers from technical giants in the area – Apple, Google and Twitter – who donated not only time, but funding to the project. 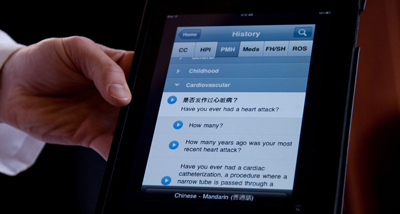 The free mobile translation application, MediBabble, made its debut in the iTunes Store in April.

“This is really a collection of people that have been dedicated to serving the community,” Blau said. “We’ve been incredibly lucky, specifically here at UCSF, to have access to the resources that we do here. I don’t think it would be possible to put together this kind of project without having the support that we’ve had from our colleagues.”

Cohn and Blau decided to offer the software free of charge in recognition of the pool of collaborators who helped create it and in service to their fellow medical students, doctors, nurses and paramedics worldwide – the people who, in Cohn’s words, “need it most.”

Downloads are coming from remote corners of the world, along with requests for translations into more languages. A team of fourth-year medical students from UCSF recently used the software on a volunteer relief mission in Haiti, and Blau is working directly with organizations there to get the app in the hands of front-line clinicians.

MediBabble’s creators hope to develop software that allows two devices to wirelessly link patient and provider, with questions and answers that pop up in either printed text or audio in their respective languages. Another goal is to feed the medical history gathered via MediBabble into a patient’s electronic medical record.

Cohn now works as an anesthesiology resident physician, rotating through UCSF-affiliated hospitals, while Blau has turned his attention full time to MediBabble. The next five languages to be added are French, German, Hindi, Urdu and Arabic.

The application’s launch follows a government report citing ways to reduce disparities in health care delivery to racial and ethnic minorities in the United States. On April 8, the U.S. Department of Health and Human Services announced remedial guidelines, including a national registry of medical interpreters. Mobile medical translation apps like MediBabble may eventually make such a registry unnecessary.

With no plans in the works for a public company, and still funding their project through grants and donations, Cohn and Blau see themselves as doctors, first and foremost.

“This has been a real life education on how we can bring technological resources to bear for treating patients, for improving their condition and for hopefully beating disease,” Cohn said.  “And we’re really lucky to be here in this moment when this is being developed, because maybe we can be part of this sweeping change – because it’s going to change health care, like it’s changed the rest of the world.”