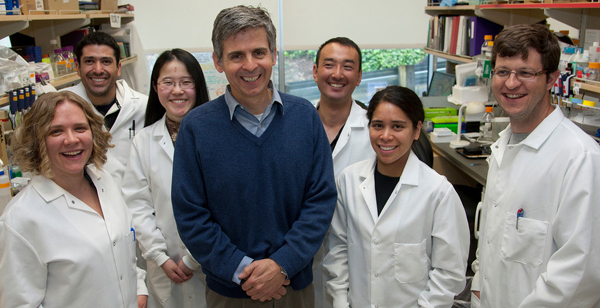 Neural stem cell scientist Arturo Alvarez-Buylla, PhD, had a very early start to his day on Wednesday, receiving word in the wee hours that he was one of three scientists named to receive the 2011 Prince of Asturias Award for Technical and Scientific Research.

He shares the prize with Joseph Altman, of the Purdue University (Indiana) and Giacomo Rizzolatti of the University of Parma. The award will be bestowed this fall in Oviedo, Spain, the headquarters of the Prince of Asturias Foundation.

Citing the scientists as “worldwide leaders in neurology,” the Foundation credited them with providing “solid proof of the regeneration of neurons in adult brains (neurogenesis) and for the discovery of what are known as mirror neurons,” adding, “(t)heir research has opened up promising pathways to a new generation of treatments to fight neurodegenerative and brain-related disorders such as Alzheimer’s disease, Parkinson’s disease or Autism.”

Alvarez-Buylla, specifically, was recognized for identifying neural stem cells in the brains of mammals, and for his ongoing research on their behavior – and potential therapeutic use – in treating diseases. He is exploring their possible role in the development of the most common type of brain tumor, the glioma, and their potential use in regenerating brain tissue damaged by injury or degenerative diseases. More generally, he is studying the way in which adult neural stem cells behave and function – their development into young neurons, the migration of these neurons from their site of birth to their final destinations, and their function in the adult brain.

Credit Given to Mentor

He credits his mentor at Rockefeller University, Fernando Nottebohm, PhD, with laying the groundwork for the field. In several papers between 1982-1987, Nottebohm demonstrated neurogenesis in the brain of songbirds, providing the evidence that neural stem cells that produce new neurons persist in the adult vertebrate brain.

“Based on his discoveries and our early work together in songbirds,” Alvarez-Buylla said, “I began investigating whether neural stem cells were also present in the adult mammalian brain, focusing on rodents and, more recently, human brain tissue, as well.”

In 1999 and 2004, Alvarez-Buylla’s laboratory reported that a population of cells known as astrocytes function as neural stem cells in a region of the rodent and human brain known as the subventricular zone. The research on the human brain was done with tissues from neurological resections in the UCSF Department of Neurological Surgery and from autopsies.

“Arturo’s contribution to the field of adult stem cell science has been tremendous,” said Arnold Kriegstein, MD, PhD, director of the Eli and Edythe Broad Center of Regeneration Medicine and Stem Cell Research at UCSF.  “He has helped lay the foundation for our understanding of the role and behavior of neural stem cells in the adult brain, which could lead to new strategies for treating brain damage and diseases.”

Mitchel Berger, MD, chair of the Department of Neurological Surgery, cited Alvarez-Buylla’s pioneering research on the origin of gliomas. “We strongly suspect that astrocytic stem cells in the subventricular zone form gliomas, and are working toward developing  therapeutic strategies aimed at blocking astroyctic stem cell proliferation, or division, at an early stage of tumor development. ”

Among his many current projects, Alvarez-Buylla, with several UCSF colleagues, is investigating the potential use of a particular type of cell derived from neural stem cells to inhibit the hyperactivity that occurs in the nervous system in several neurological conditions. The cells, known as embryonic medial ganglionic eminence (MGE) cells, inhibit the activity of other cells.Maintaining the balance between inhibitory and excitatory signaling in the nervous system is critical to normal neurological function.

The research, funded by the California Institute for Regenerative Medicine, focuses on epilepsy, but potentially could be used to treat Parkinson's disease, traumatic brain injury, and spasticity after spinal cord injury.

“I am very honored to receive this award,” said Alvarez-Buylla, PhD, UCSF Heather and Melanie Muss Professor of Neurological Surgery and a member of the Eli and Edythe Broad Center of Regeneration Medicine and Stem Cell Research at UCSF, “and I enjoyed the opportunity to talk about UCSF with the Latin press on Wednesday morning.”

Alvarez-Buylla, who was born and raised  in Mexico, obtained his degree in Biomedical Research from the National Autonomous University of Mexico in 1983 and a PhD from the Rockefeller University in 1988, where he lectured from 1989 to 2000.He was a graduate student in the Nottebohm laboratory.

The Asturias foundation awards comprises a diploma, a Joan Miró sculpture symbolizing the Awards, an insignia bearing the Foundation’s coat of arms and a cash prize of 50,000 Euros. They are intended for “encouraging and promoting the scientific, cultural and humanistic values that form part of mankind’s universal heritage.”