Call it a mystery with a stubby tail: an odd-looking mouse discovered through a U.S. government breeding program in the 1940s that had a short, kinky tail and an extra set of ribs in its neck – and nobody knew why.

A team of scientists led by researchers at the University of California, San Francisco has now spilled the genetic secrets of this mutant rodent. In doing so, they may have uncovered a new wrinkle in the genetic code – an entirely unrecognized way our bodies regulate how genes are expressed in different tissues throughout life.

This discovery has broad implications for how we think about developmental biology, and it may explain the origins of numerous developmental diseases. It also may help suggest new ways of treating certain types of cancer, many of which may be linked, at least in part, to problems in how the body regulates gene expression.

“The ultimate outcome of gene expression is the production of proteins,” said UCSF Faculty Fellow Maria Barna, PhD, who led the research. “Our study suggests that there is a new way of controlling which types of proteins will be produced in which types of cells.”

As described in this week’s issue of the journal Cell, the research identified a molecular machine called the ribosome as the factor that exerts this new control over gene expression. Though well known to scientists as a key component of living cells, the ribosome was never thought to play a regulatory role.

How the Mutant Mouse Came to Be

The “tail short” mutant mouse first appeared in 1946 at the National Cancer Institute in Bethesda, MD, where several were discovered among a litter of offspring born to a highly inbred strain of mice raised in a breeding program. They all had very unusual skeletal features: short, stubby tails and an extra set of ribs in their neck vertebrae.

Doctors recognized the uniqueness and potential importance of the mouse immediately. It wasn’t just that the skeleton was malformed – it seemed to be misplaced. The neck vertebrae had ribs and resembled vertebrae lower in the spine. It was as if the body plan of this mouse had been incorrectly mixed up in early development, though it was beyond the ability of scientists in those days to determine why. 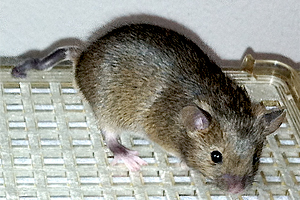 Through the decades, the mouse remained a curiosity of sorts. Its progeny were carefully bred year after year, but decades passed before anyone could determine which genes were responsible for its unusual features.

Finally, a few years ago, Barna and her colleagues, became interested in the mouse, and she worked with scientists at the National Institute of Genetics in Japan to identify the exact mutations that cause the malformations. A developmental biologist herself, Barna suspected that the mouse's peculiar skeletal structures suggested some sort of anomalous "patterning" in early development, where one part of the body forms incorrectly in the shape of a different part. What they found, said Barna, was a complete surprise.

The mutations turned out to be in the ribosome, a massive molecular machine that makes proteins and are common to all forms of life. They can be found in every cell in every tissue of the human body, and scientists believe that similar versions have been inside every cell of every creature that ever lived – whether cat, carp, cholera or Caesar.

The ribosome is so common because it plays a central role in biology by making proteins that do everything from building the body’s tissues to carrying out crucial biological functions, like breaking down food in the gut and encoding memories in the brain. Despite its importance, scientists had always assumed that the ribosome was something of an automaton – a machine that simply took instructions from a creature's genetic code and spit out proteins. Mutations in the tail short mouse, however, showed otherwise.

These mutations turned out to delete a protein called Rpl38, one of 79 proteins that make up the mouse ribosome. Without Rpl38, the ribosome in the tail short mouse still worked, but it lost the ability to control which proteins it expressed – an ability scientists never thought the ribosome had in the first place. Moreover, the effect was not generalized throughout the body of the mouse, but specific only to certain tissues.

In early fetal development, the loss of Rpl38 caused certain parts of the backbone to grow and develop as if they were elsewhere in the spine – thus the extra ribs in the neck. Mutations in the proteins of human ribosomes can also lead to unexpected tissue-specific congenital birth defects including malformations of the spine, face, limbs, heart and other organs. The reasons why have been a mystery, but the explanation may be that the ribosome plays a fundamental regulatory role in embryonic development.

“It dictates where and when the final outcomes of gene products are expressed,” said Barna. “Therefore the genetic code has a previously unrecognized set of instructions that are carried out by the ribosome to control cell behavior. For example, whether or not a vertebrate has a pair of ribs associated with it.”

The work also suggests that ribosomes could act differently in different tissues in the body, adding an entirely new layer of complexity to the already complex program by which the genetic code is expressed in living creatures.