The award provides the UCSF team $250,000 over two years in seed funding for a device known as the SMART Diaphragm, which monitors early signs of pre-term labor and sends a wireless alert to the patient’s physician.

Those funds include a $50,000 award from the United Nations' mHealth Alliance, in recognition of the project's potential to address critical health challenges in developing countries.

The funding will enable the team to gather the preliminary data needed to take the project into randomized clinical trials if the pilot is a success, according to project leader Larry Rand, MD.

“From a public health perspective, preterm birth is a problem well-worth combating,” said Rand, who holds the Lynne and Marc Benioff Endowed Chair in Maternal Fetal Medicine at UCSF. “This is the leading cause of infant mortality worldwide, with 13 million deaths per year, and it is not a problem isolated to the developing world.”

Preterm birth affects one in 10 infants globally and one in eight in the United States. A preterm infant is 70 times more likely to die than one born full term, regardless of the country, Rand said, and those who survive face a major risk of lifelong disability. It also poses an enormous medical cost, reaching $26 billion each year in the United States alone, yet it is often preventable with early detection and treatment.

“It is time to attack this problem with novel and alternative approaches and strategies,” Rand said. “This device exemplifies that kind of thinking and it was made possible by the multi-disciplinary philosophy of UCSF that allows a team like ours to come together.” 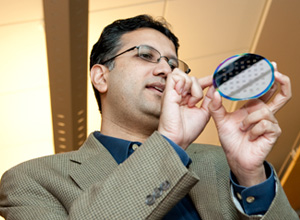 The project showcases both the collaborative approaches at UCSF and the ability of bioengineering students to serve as key catalysts and partners in the innovation process, according to Shuvo Roy, PhD, a member of the UCSF team and associate professor of bioengineering, whose work in micro-electromechanical systems (MEMS) focuses on developing miniature devices for biomedical applications.

The SMART Diaphragm is a low-cost wireless device with embedded sensors to detect decreasing levels of collagen in the cervix – an indicator of impending pre-term labor – and communicates the results via any Bluetooth-enabled device to a cloud database monitored by physicians. The device is designed as a cervical diaphragm, similar to the one used as birth control, which has years’ worth of acceptability data for women worldwide, Rand said.

When low levels of collagen are detected, the woman’s physician receives a warning signal that she is in need of evaluation, well before she experiences any symptoms, he said. In remote areas or developing nations, that could enable at-risk women to be easily identified and routed to larger regional medical centers before it is too late to intervene.

The third key member of the team is bioengineering student Mozziyar Etemadi, a second-year MD/PhD student at UCSF who holds a master’s degree in electrical engineering from Stanford University, where he developed a non-invasive method for measuring cardiac output. Both Etemadi and Roy are members of the UCSF Pediatric Device Consortium, which develops medical devices to correct birth defects and which connected them to Rand.

The project was one of three recipients to receive the award on April 14, out of nearly 100 applicants. All three Vodafone winners this year were in the mobile health field this year, which was the first time Vodafone partnered with the United Nations’ mHealth Alliance on the awards.

More information on the awards and other projects can be found here.