San Francisco Fire Chief Joanne Hayes-White and Mayor Ed Lee visit with firefighter Stan Lee, who was injured the previous day in the line of duty and is being treated at SFGH.

San Francisco Mayor Edwin M. Lee toured the hospital last week to learn about how the more than 2,000 UCSF physicians and staff work side-by-side with the dedicated employees of the San Francisco Department of Public Health to deliver around-the-clock trauma, psychiatric and emergency care, outpatient treatment and a wide range of other important health care services to everyone in San Francisco, regardless of their ability to pay.

“On my visit, I saw first-hand how the unique partnership between San Francisco General Hospital, the City and the University of California, San Francisco has enormously benefited all of us,” said Mayor Edwin Lee. “The partnership provides a framework for quality patient care and improving the health outcomes for San Franciscans."

The relationship between SFGH and UCSF dates back to the first written affiliation agreement in 1959, which outlines the responsibilities and expectations of both entities.

SFGH By the Numbers

1: Home to the one and only level-one trauma center in San Francisco
30: Percent of all ambulances who come to SFGH
32: Percent of all UCSF resident training
35+: Number of languages spoken by interpreters
1873: Date of UCSF-SFGH affiliation agreement
1,220: Number of babies born at SFGH
54,000+: Number of emergency visits
100,000: Number of patients treated annually
2,000: Approximate number of UCSF faculty at SFGH
$150 million: Amount of research grants SFGH receives
$639 million: Budget for Fiscal Year (FY) 2009-2010
2015: Expected date of the opening of the nine-story, 453,000-square-foot new hospital

“We wouldn’t be a hospital without this partnership,” said Sue Currin, RN, MS, chief executive officer of SFGH. “Our mission is driven to care for a vulnerable patient population, and we don’t have a lot of resources, which constantly challenges us to see how we can make it work with less. The relationship fosters creative and innovative approaches and we’re not afraid to try new things.”

The affiliation between SFGH and UCSF is mutually beneficial, combining clinical and teaching activities to uniformly provide the highest quality of care to patients while spending considerably less money than if the two entities functioned independently. The affiliation budget is evaluated extensively each year to best serve the needs of SFGH patients.

Upon arriving at the hospital, Mayor Lee first visited Stan Lee, a San Francisco firefighter who was injured the day before while responding to a blaze. San Francisco Fire Chief Joanne Hayes-White was also on hand, praising SFGH for its high-quality, top-shelf trauma response and care.

The mayor then visited several departments that are essential to serving the needs of San Francisco residents, including the pediatric clinic, the intensive care unit, the emergency room, the psychiatric emergency room and labor and delivery.

Located in the Mission District, SFGH treats approximately 100,000 patients per year and provides 20 percent of San Francisco’s inpatient care and 30 percent of all ambulance traffic. Many residents, especially those interested in family medicine, are attracted to SFGH for training and, because UCSF supplies all of the physicians to SFGH a strong foundation of health care delivered at the hospital.

“All of the UCSF residents come through SFGH for training, and on any given day at least one-third of residents as well as medical students are here,” said Sue Carlisle, MD, PhD, associate dean at SFGH for the UCSF School of Medicine. “It’s giving the trainees the opportunity to get experience working with a different patient population.”

In addition to being an essential training ground for UCSF, SFGH is also a major research site for the University, receiving approximately $150 million in research grants — accounting for 25 percent of all National Institutes of Health grants to the entire University. 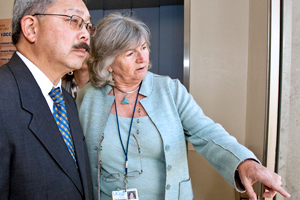 Sue Carlisle, associate dean of the UCSF School of Medicine, points to progress made in the construction of a new San Francisco General Hospital to San Francisco Mayor Ed Lee.

To provide even better care for future generations of San Franciscans, SFGH is currently undergoing a massive rebuild and constructing a new nine-story hospital building west of the existing hospital.

With 40,000 square feet per floor including two basements levels, the new facility will provide 284 general acute care beds, increasing the number of private rooms and critical care beds to continue to meet the community’s needs. The emergency department also will be expanded.

A pedestrian bridge will connect the new facility with the existing hospital at the second floor level and a tunnel connection will connect the basement. To comply with a state law to better protect patients in case of an earthquake, the hospital is slated for completion in 2015.

“We have a very very busy emergency department, so we’re very excited about the expansion in the new hospital,” said Currin. “It will have three times the capacity and the ability to handle twice the number of patients in the event of a disaster.”

As a first responder and the San Francisco’s only trauma center, the new hospital will be the hub of San Francisco’s health care emergency response, housing the Department of Public Health’s Departmental Operations Center, which coordinates all medical responses for the city.