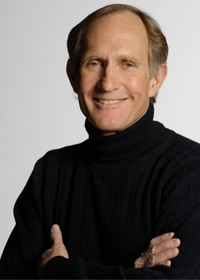 Nobel laureate Peter Courtland Agre, MD, is scheduled to lecture on “Science Diplomacy in the 21st Century” on Friday, April 8, in the Robert W. Mahley Auditorium at the J. David Gladstone Institutes at Mission Bay.

The one-hour talk will start at 10 a.m. and is open to members of the UCSF community and the public.

Agre shared the Nobel Prize in Chemistry in 2003 with Roderick MacKinnon “for discoveries concerning channels in cell membranes.”  He is University Professor, Gilman Scholar, and director of the Malaria Research Institute at the Bloomberg School of Public Health at Johns Hopkins University.

In addition, Agre is a member of the National Academy of Sciences and the Institute of Medicine. From 2009-2010, Agre served as President of the American Association for the Advancement of Sciences.

The Gladstone Institutes is located at 1650 Owens Street at Mission Bay.

A native Minnesotan, Agre studied chemistry at Augsburg College, where he earned a BA degree 1970. While working on cholera as a medical student at Johns Hopkins, Agre developed a love for biomedical research.

Following an internal medicine residency at Case Western Reserve University Hospitals of Cleveland and a hematology-oncology Fellowship at the University of North Carolina at Chapel Hill, Agre returned to Johns Hopkins as a postdoctoral fellow in the Department of Cell Biology in the laboratory of his medical school roommate, Vann Bennett. Agre began studies of membranes of red blood cells from patients with congenital anemias in Bennett's lab.

Recruited by Victor McKusick, Agre joined the faculty at the Johns Hopkins School of Medicine in 1984 and rose to professor of biological chemistry and professor of medicine. Following a term as vice chancellor for science and technology at Duke Medical Center, Agre returned to Johns Hopkins in January 2008, where he is University Professor, Gilman Scholar, and director of the Malaria Research Institute at the Bloomberg School of Public Health.

In 1992, the Agre lab became widely recognized for discovering the aquaporins, a family of water channel proteins found throughout nature and responsible for numerous physiological processes in humans — including kidney concentration, as well as secretion of spinal fluid, aqueous humor, tears, sweat, and release of glycerol from fat. Aquaporins have been implicated in multiple clinical disorders—including fluid retention, bedwetting, brain edema, cataracts, and arsenic poisoning. Water transport in diverse organisms, including Anopheles mosquitoes and malaria parasites, involve aquaporins.