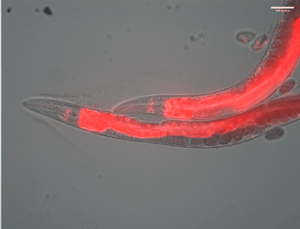 A team of scientists at the University of California, San Francisco (UCSF) has developed a new model for how inherited genes contribute to a common but untreatable and incurable neurodegenerative disease. The disease, frontotemporal lobar degeneration, is the second most common cause of dementia before age 65, after Alzheimer’s disease.

Based on experiments in worms and mice, the UCSF team’s work explains in part why the brain deteriorates in frontotemporal lobar degeneration, which may have implications for the understanding of several neurodegenerative disorders, including Alzheimer’s and Parkinson’s, as well as different forms of cancer.

“If our findings hold up,” said Aimee Kao, an assistant adjunct professor in the Department of Neurology at UCSF, “they may suggest a new way to think about how to treat neurodegenerative diseases.” Kao is first author on the study, led by Cynthia Kenyon, PhD, a professor of biochemistry and biophysics at UCSF and director of UCSF's Larry L. Hillblom Center for the Biology of Aging.

Disease Caused By Loss of Neurons

Generally scientists have blamed the mental decline associated with neurodegenerative diseases on the loss of neurons associated with the accumulation of insoluble protein in the brain – sticky plaques that interfere with and ultimately kill the brain’s neurons.

In frontotemporal lobar degeneration, this loss of neurons happens in the frontal lobe – the part of the brain involved in such higher mental functions as art appreciation and emotional empathy. People with this disease can suffer from progressive difficulties with language, undergo personality and behavioral changes, and usually die within a decade of diagnosis.

The new work suggests that the accumulation of insoluble protein may not be the only cause of cognitive decline in frontotemporal lobar degeneration. Another mechanism could involve how the body deals with injured neurons in the brain.

A significant percentage of patients with frontotemporal lobar degeneration have mutations in the gene that produces a protein called progranulin. Scientists have known that people with these genetic mutations produce too little progranulin protein, but up to now it was unclear what role this played in disease development. 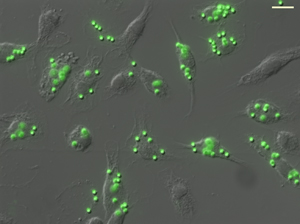 Now the work of the UCSF team suggests that progranulin regulates the speed with which dying cells are cleared.

The Speed of Brain Cell Death

Cells in the brain – as in the rest of the human body – die through a process known as apoptosis, or programmed cell death. In a sense, apoptosis is the cellular equivalent of a controlled implosion.

Rather than explode a condemned building in a crowded city and scatter its dust and rubble across surrounding neighborhoods, implosions minimize the fallout. Likewise, apoptosis of neurons prevents them from exploding and damaging the surrounding brain tissue, instead withering them away in protective fashion.

In their paper, Kao, Kenyon and their colleagues show that progranulin normally slows the process of apoptosis. In its absence, however, apoptotic cells are cleared more quickly, probably by neighboring cells, which engulf them.

Using a sophisticated microscope, the UCSF team showed that mutations to the progranulin gene caused cells in the microscopic roundworm C.elegans that were undergoing this programmed cell death to be cleared in about half the time, as compared to normal worms. They also found something similar in engulfing cells called macrophages that were taken from mice. When these cells lacked progranulin, they engulfed other, dying cells even faster.

“In both worms and cultured macrophages,” Kao said, “the absence of progranulin cause more rapid clearance of dying cells.”

Based on these findings, the team hypothesized that lack of progranulin may affect the ability of cells to recover from an injury. When individual cells are injured, the damage may or may not be fatal. Given enough time, the damaged cell could recover. However, if local engulfing cells are over-eager to remove the damaged cell, the cell may have too little time to recover. If this scenario occurred in the brain, then over time, the cumulative cell loss could lead to neurodegenerative disease.

These findings also have implications in the treatment of cancer, since some aggressive forms of breast, brain and bladder cancer produce increased levels of progranulin.

“These cancers may be using progranulin as a sort of ‘invisibility shield’ to hide from the surveillance of the immune system,” Kao said. “Thus, progranulin could represent a druggable target in both neurodegeneration and some forms of cancer.”

The study was published online last week by the journal Proceedings of the National Academy of Sciences.