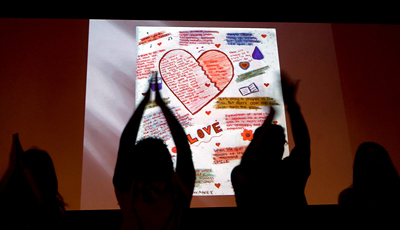 An excerpt from a UCSF Benioff Children's Hospital patient's journal entry is projected on a screen and used as a backdrop for the performance.

Cancer diagnoses, eating disorders and hospital food were just some of the issues affecting teen patients at the UCSF Benioff Children’s Hospital that inspired the “100 Journals project,” a theatrical performance by students from San Francisco’s Galileo High School’s drama department.

Twenty-five journals were filled by hundreds of current and former teen patients at the UCSF Benioff Children’s Hospital and brought to the stage on March 11 to feature the triumphs and struggles of these teen patients.

“The performance highlights how teens can help teens and sometimes help them more than adults can,” said UCSF Child Life Services Manager Michael Towne.  “One thing that people in the hospital struggle with is a sense of isolation, and in this case a blank journal is connecting these patients to other teens and the outside world.”

As the journals were passed around the hospital, patients could read other teen’s previous entries and learn how they face challenges, celebrate victories and simply live dealing with things unfamiliar to most of their peers outside the medical center.

“When the journals were passed around you could read what other people were going through and not feel alone and connect with people who you’ve sometimes never met,” said Sarah, a teen patient at UCSF Benioff Children’s Hospital.

Fourteen students performed the series of vignettes at Koret Auditorium in the DeYoung Museum on March 11 while pages of journal entries were projected overhead amongst black and white photos of patients. Standing on black box platforms, the performers spoke excerpts from the journals describing the discovery of a tumor when one patient broke his arm and another who weighed two pounds at birth. “My doctor said, Give us a year and we’ll give you the rest of your life,” one entry read.

The production was inspired by the 1000 journals project which launched in San Francisco in 2000. The global art experiment was started by local artist Brian Singer who circulated 1000 blank journals throughout the world to be slowly filled as they were passed between strangers.

“It’s really cool and powerful to see what kids have been putting in their journals and documenting what their experience is in the hospital,” said Singer.

The performance is one of several special events taking place this month as part of national Child Life Month, which recognizes the integral role hospital child life programs play in the healing process. “In Child Life Services we provide a lot of means to help children and their families get through the difficulties that are often part of hospitalization,” said Towne.

UCSF’s Child Life Department helps children and their families adjust to and understand illness and treatment, ensuring that every child’s developmental and emotional needs are met during a hospital stay.